Olympic boxer Fuchs determined to win her fight against OCD 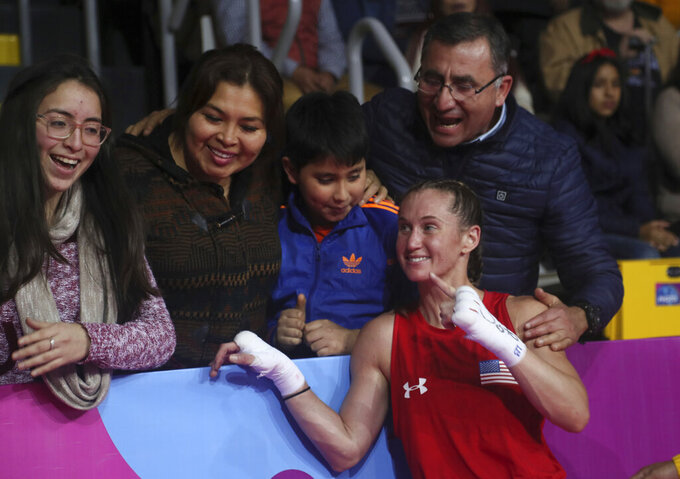 FILE - Virginia Fuchs of the United States poses with fans after her fight against Irismar Cardozo of Venezuela in the women's fly, 51 kg, boxing semifinal match at the Pan American Games in Lima, Peru, in this Tuesday, July 30, 2019, file photo. Fuchs’ obsessive-compulsive disorder sometimes compels her to use a dozen toothbrushes a night and to buy hundreds of dollars of cleaning products per week. Yet Fuchs is headed to Tokyo next week to compete in the Olympic boxing tournament, where she realizes it’s almost impossible to avoid touching the blood, sweat and spit of her opponents.(AP Photo/Fernando Llano, File)

COLORADO SPRINGS, Colo. (AP) — Ginny Fuchs' obsessive-compulsive disorder sometimes compels her to use a dozen toothbrushes a night, tossing one after another into the trash when she decides they've been contaminated. She has spent hundreds of dollars a week on cleaning products, and she sometimes bleaches the bottoms of her shoes.

She even wears baseball players' batting gloves when she does her strength-and-conditioning work with the U.S. Olympic boxing team so she won't have to touch the workout mats while doing push-ups.

“It’s like this black cloud that follows me every second of my day,” Fuchs said of OCD, which invades the mind with unreasonable thoughts and fears leading to repetitive, compulsive behavior. “I always feel like I’m in this jail of OCD mind that I can’t get out of.”

Yet Fuchs is headed to Japan next month to compete in the Tokyo Olympic boxing tournament, where she realizes it's almost impossible to avoid coming into contact with the blood, sweat and saliva of the stranger across from her.

Fuchs is fighting inside and outside the ring these days, both for a gold medal and for mental health awareness. She is determined to speak openly and frankly about a disorder she tried to hide for many years.

Fuchs sees the contradictions in taking her condition into the chaos of a boxing ring. Her OCD has affected all areas of her life, yet it's somehow wildly overmatched by Fuchs' desire for gold.

“This is why OCD is so irrational,” Fuchs said. “It doesn’t even make sense. I’m getting punched in the face, and some spit or blood might get on me. And I understand that, but my mind is, I guess, able to rationalize that. But if I drop my phone on the floor of my house for two seconds, I’ll freak out. ‘Oh my God, I can’t touch my phone.' I’ve got to use like 1,000 Clorox wipes before I feel like it's clean enough.”

Fuchs hasn't allowed OCD or two Olympic near-misses to deter her from her ultimate goal. After barely failing to qualify for London and Rio, the 33-year-old flyweight finally punched her ticket this year as one of the world's top fighters in her weight class.

She is among the favorites for gold in a sport where much depends on the tournament draw and the whims of unpredictable judging, but those inherent uncertainties don't consume nearly as much of Fuchs' mind as her OCD.

Fuchs struggled through all of 2018, saying her OCD was “beating her every second,” yet she still won bronze at the AIBA world championships in India. She put herself into inpatient care in February 2019, skipping a smaller tournament and only leaving for the qualifiers for the Pan-American Games, where she won silver.

“I should have stayed there longer, but I just didn't know how to control those thoughts anymore, and it scared me,” Fuchs said. “I still was able to compete and everything, but personally and mentally, I was going through hell.”

Fuchs' determination to speak up against the stigma of mental illness comes at a time when awareness is rising throughout sports. Most notably, four-time Grand Slam tennis champion Naomi Osaka received widespread support when she cited mental health issues in withdrawing from the French Open, Wimbledon and the Olympics.

Fuchs spoke poignantly about her struggle in “Mysteries of Mental Illness,” a four-part documentary series premiering this week on PBS. Fuchs was inspired by the desire to create greater access to mental health help for underserved communities embodied in the project, which includes a short-form streaming digital video series.

Fuchs also appeared this year on “The Me You Can't See,” an Apple TV documentary series produced by Oprah Winfrey. Their cameras followed Fuchs at the U.S. Olympic Training Center, where she has spent years managing her OCD in the dorm-style living conditions in Colorado Springs.

“The message I want to tell people is, talk about it,” Fuchs said. “Don’t be ashamed about it. If you get them to understand it and paint a picture of what you’re struggling with, maybe they can relate or understand. That's what has helped me. Talking about it actually helped me understand why I might have these thoughts, and why I might do these certain behaviors and rituals.”

Fuchs first noticed her OCD symptoms in the fifth grade when she was repulsed by the perceived dirtiness of her backpack. Fuchs' mother saw signs even earlier, and the symptoms became more pronounced in the sixth grade when Fuchs began to struggle with anorexia. Fuchs said a therapist identified her OCD as the root of her eating disorder while she received inpatient treatment in the eighth grade.

OCD can subsume Fuchs’ life for long stretches, yet she also beats it back at times, particularly during competitions. She can’t explain the fluctuations or the contradictions.

“My mind is telling me to clean more, to get back in the shower,” Fuchs said. “But I realize the value of that moment is to recover and get ready for the next fight. I’m able to shut those thoughts off easier and just focus on the fight ahead of me, and winning the tournament.”

Fuchs has tried a cognitive behavior therapy called exposure and response prevention, but her busy boxing schedule has prevented her from fully investing in the process. She hopes to pick it up after the Olympics while determining the next step in her boxing journey.

For now, she's thinking about the challenges looming in Tokyo, including how to get enough cleaning supplies to assuage her mind's constant pressure in the unfamiliar surroundings of the athletes’ village.

“It’s going to be very hard for me to be comfortable,” Fuchs said. “I know at least it’s a very clean country.”