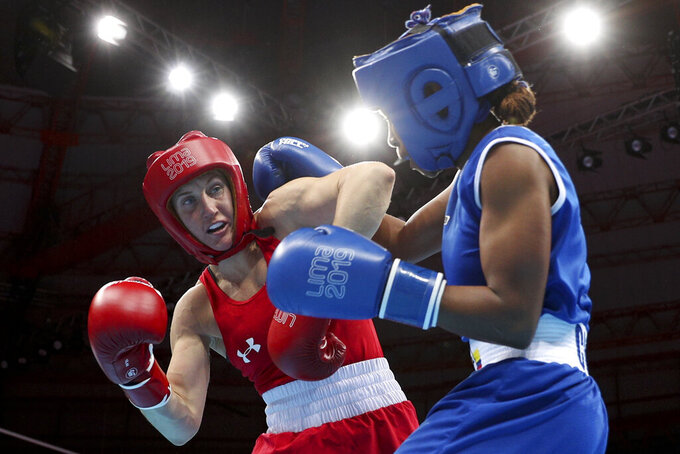 FILE - In this Aug. 2, 2019, file photo, Ingrit Valencia, right, of Colombia and Virginia Fuchs, of the United States compete in the women's flyweight boxing final bout at the Pan American Games in Lima, Peru. U.S. Olympic team boxer Fuchs will face no punishment for failing a doping test after the U.S. Anti-Doping Association determined the violation had been caused by two substances transmitted by her boyfriend through sex. USADA announced its ruling Thursday, June 11, 2020, clearing the 32-year-old Fuchs, who intends to qualify for the Tokyo Olympics next year as a flyweight. (AP Photo/Martin Mejia, File)

For a few days in March, Ginny Fuchs thought her biggest challenge of the year would be managing her obsessive compulsive disorder during a viral pandemic while still training to box at the Olympics.

And then 2020 got even crazier for the U.S. Olympic flyweight hopeful.

The Tokyo Games were postponed, adding another delay to the dreams of a tenacious fighter who has spent a decade working toward her first Olympic appearance.

She failed a U.S. Anti-Doping Agency test, only to be cleared by USADA on Thursday when the agency determined the two banned substances had been passed to her by her boyfriend.

And just last week, Fuchs' close friend and training partner, professional boxer Mikaela Mayer, tested positive for COVID-19. The former U.S. Olympian was forced to miss her comeback fight in Las Vegas, even though her test might have been a false positive.

Through it all, Fuchs is still fighting.

“Everybody is struggling right now,” Fuchs said. “I'm not the only one.”

Fuchs and the prospective U.S. Olympic team returned to Colorado Springs this week to begin its first training camp since the start of the pandemic. The fighters still don't know when they'll be able to participate in a qualifying tournament to earn a spot in Tokyo.

But Fuchs has overcome even bigger obstacles already this year.

Fuchs said the coronavirus actually doesn't seem like the most daunting challenge of her Olympic preparation. The hypervigilant cleanliness required to minimize COVID-19 exposure hasn't changed much for Fuchs, whose particular form of OCD forces her to think constantly about thorough cleaning and avoiding cross-contamination with everything she touches.

“With this epidemic, I’ve been like, ‘Hey, everybody, welcome to my world!’” she said with a laugh. “Everybody is disinfecting everything constantly. Everybody is wearing gloves, and whoever is wearing masks, well, I always do this. It makes me less anxious because everybody else is doing it, too.”

The biggest challenges of the pandemic have been about geography and the availability of cleaning supplies. Fuchs and Mayer traveled around the country by car over the past three months, going to fight camps in Washington, D.C., and in Fuchs' native Houston before continuing to Las Vegas and Colorado Springs.

Each stop required a new plan for procuring the cleaning supplies Fuchs needs to satisfy her mind.

“Sometimes I'll have really major panic attacks,” Fuchs said. “I get so panicky thinking I can't get the supplies I need to do my rituals. I'll get really upset and emotional, and be like, ‘I’m stuck. I can't do anything. I feel trapped.' I've had a couple of moments like that during this quarantine where I just need to sit down and calm myself. Some days, I need a whole day to reset and let my anxiety calm down before I can move on. That's an advantage of the (quarantine), because I have time for that.”

Fuchs didn't want to comment about the tests beyond a statement issued by USA Boxing: "I had no idea that I could become contaminated by way of intimate contact with another person. I want to thank USA Boxing for believing in me and supporting me throughout these past few difficult months.”

Fuchs' positive test was administered in mid-February, and she found out about the results in March, according to USADA. When the Tokyo Games were postponed around the same time, the 32-year-old Fuchs admits she thought briefly about joining Mayer in the professional ranks.

But Fuchs has been focused on the Olympics since shortly after she took up boxing in her sophomore year of college at LSU. She didn't make the U.S. team for the debut of women's boxing at the London Olympics in 2012, and she fell just short of qualification for the Rio Olympics four years later.

Fuchs was determined not to miss out on her third and best shot, no matter what obstacles the world has thrown in her way.

“My first goal in boxing was always to be an Olympian and get a gold medal,” Fuchs said. “That's why I waited another four years (after Rio). All of these last four years, I worked hard for it. It’s not going to go to waste. I still want to get that gold medal."