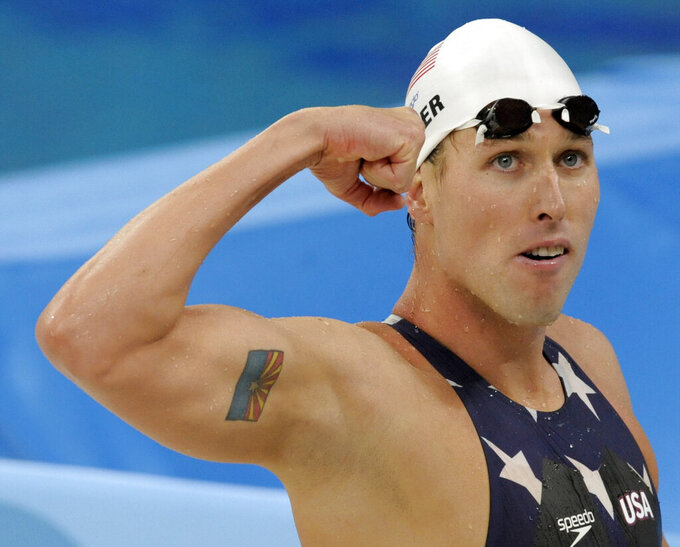 FILE - This Aug. 12, 2008, file photo shows United States' relay swimmer Klete Keller at the Beijing 2008 Olympics. The five-time Olympic medalist pleaded guilty on Wednesday, Sept. 29, 2021, to a felony charge for storming the U.S. Capitol during the Jan. 6 riot. Keller faces 21 to 27 months in prison for his guilty plea to obstruction of an official proceeding. (AP Photo/Thomas Kienzle, File)

WASHINGTON (AP) — Five-time Olympic swimming medalist Klete Keller pleaded guilty Wednesday to a felony charge for storming the U.S. Capitol during the Jan. 6 riot and faces 21 to 27 months in prison.

Keller acknowledged in court records that he tried to obstruct Congress’ certification of President Joe Biden’s Electoral College victory, brushed away officers who tried to remove him from the Capitol Rotunda and yelled profane comments about House Speaker Nancy Pelosi and Senate Majority Leader Chuck Schumer as he stood near officers wearing riot gear.

He also acknowledged throwing away the distinctive U.S. Olympic team jacket he wore during the riot and destroying his phone and memory card containing photos and videos he took inside the Capitol.

Keller, 39, who grew up in Arizona and now lives in Colorado Springs, competed in the 2000, 2004 and 2008 Summer Olympics. He won two golds and a silver as a member of the 800-meter freestyle relay, as well as a pair of individual bronzes in the 400 free.

He pleaded guilty to obstruction of an official proceeding and agreed to cooperate with authorities as part of his plea deal.