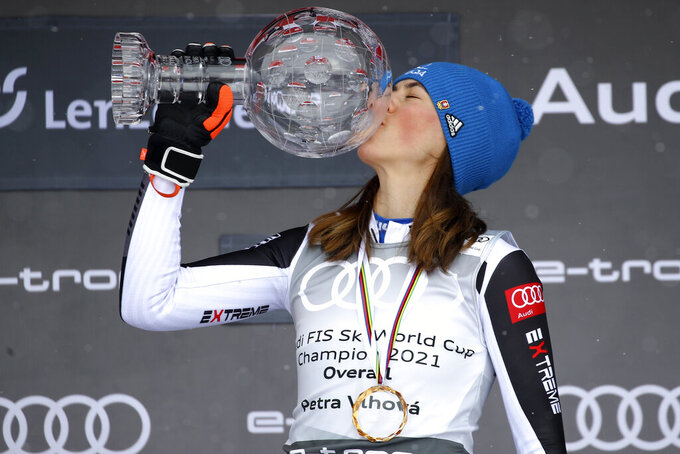 Overall World Cup champion Petra Vlhova will go into the Olympic season without the coach that helped her win skiing’s biggest prize this year.

The Slovakian skier said she was parting ways with Livio Magoni after five years.

“One door is closing, and a thousand more are opening and we just have to choose those that are right for us. For this time, our doors are different,” Vlhova said late Tuesday in a statement on her social media channels.

No reason for the break was mentioned, but media reported their relationship had been tense following unflattering remarks on Vlhova’s style of skiing supposedly made by Magoni in an interview with an Italian newspaper two weeks ago.

“It was a long and rocky road towards what we all so desperately wanted. Eventually, the dream came true and I hold a Big globe in my hands,” said Vlhova, who didn't mention a successor for Magoni.

“Amazing 5 years with you Livio, during which I learned a lot. I am immensely grateful for your time, your infinite energy, perfectionism and the hope you have constantly placed in me.”

Magoni previously coached Tina Maze to the overall title in 2013, when the Slovenian skier set a still unbroken record for most World Cup points in a single season: 2,414.

The Italian called his cooperation with Vlhova “5 beautiful and incredible years.”

“Sorry for all my mistakes in these 5 years, but I guarantee you that I have put and given everything I had for this experience,” he added.

The pair started working together in 2016, when the slalom specialist was already developing into one of Mikaela Shiffrin’s main rivals in the three-time overall champion’s strongest discipline.

Under the Italian coach, Vlhova quickly improved in giant slalom as well.

Vlhova entered five events but failed to win a medal at the 2018 Pyeongchang Olympics. She became the first world champion from Slovakia by winning the GS title at the worlds in Sweden the following year.

Vlhova won the World Cup season title in slalom for the first time in 2020 by edging Shiffrin, who was taking a break from racing.

Like he had done with Maze before, Magoni gradually turned Vlhova into an all-around competitor who regularly scored points in super-G and downhill as well.