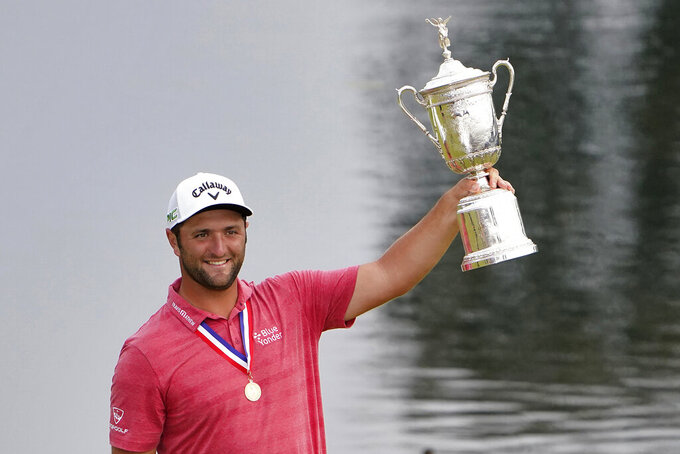 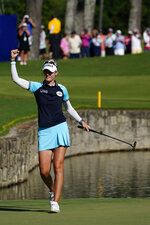 The PGA Tour began requiring COVID-19 tests more than a year ago when it returned to competition amid the pandemic. It will have overseen testing at 50 official PGA Tour events when the program ends next month.

“We are pleased to announce, after consultation with the PGA Tour medical advisers, that due to the high rate of vaccination among all constituents on the PGA Tour as well as other positively trending factors across the country, testing for COVID-19 will no longer be required as a condition of competition beginning with the 3M Open,” the tour said in a memo to players.

The final PGA Tour event for testing — not including the majors — will be the Barbasol Championship on July 15-18.

Andy Levinson, the tour's senior vice president overseeing the COVID-19 protocols, had said at the Memorial that “north of 50%” of players had been vaccinated. That number is believed to be upward of 75% of all key people who had been subject to testing.

Under the new guidelines, the tour will no longer have testing at tournaments, including for pro-ams, or the stipend program that paid players who had to withdraw and self-isolate because of a positive test.

Those who are fully vaccinated will not be required to wear masks indoors and will not have to quarantine if they have been in close contact with someone who has COVID-19. They still must fill out a daily health questionnaire and report any symptoms.

Those who are not vaccinated are encouraged to wear a mask indoors and outdoors if they cannot be socially distant. If they are in contact with someone who has COVID-19, they would have to follow contact tracing protocols.

State and local restrictions still apply, and the tour said it could conduct periodic testing if the state in which they play requires it.

The tour said it would provide testing at tournaments for those who have symptoms, and a positive test still would lead to a player withdrawing. Since the program began last June, at least 35 had to withdraw with a positive test, four of them in the middle of a tournament.

The most memorable was Jon Rahm, who was notified of his positive test right after he took a six-shot lead in the Memorial. He won the U.S. Open two weeks later.

No telling what the National Olympic Committee in the Netherlands thought of Phil Mickelson winning the PGA Championship in May as the No. 115 player in the world, or even Ben Curtis winning the 2003 British Open as a rookie ranked No. 396.

Regardless, the Dutch won't be sending their two male qualifiers, Joost Luiten and Will Besseling, to the Tokyo Olympics.

The Dutch require their golfers to be among the top 36 in the Olympic ranking and the top 100 in the world ranking.

Luiten said on a Dutch golf website that the decision proves the Dutch NOC “understand little about golf. It is common for golfers to win tournaments outside the top 100 in the world.”

Nine players were ranked outside the top 100 this season when they won on the PGA Tour, the strongest circuit in the world.

Luiten was inside the top 70 in the world when he qualified and played in the 2016 Olympics.

However, the Dutch flag will still fly over Kasumigaseki Country Club. Anne Van Dam qualified for the women's competition, even though she was No. 40 in the Olympic ranking and No. 133 in the women's world ranking.

The NOC said it considered that COVID-19 travel restrictions kept her from playing Ladies European Tour tour events that could have improved her ranking.

Van Dam has played 22 times since the LPGA Tour resumed a year ago, two of them strictly LET events. She missed the cut in nine of 22 starts on the LPGA since the return from the pandemic with no top 10s.

The famed South course at Oakland Hills is about to re-open with architect Gil Hanse having just competed a comprehensive restoration of the Donald Ross design from 1918. The next question is whether it will attract the best players in the world with a major championship on the line.

Oakland Hills has hosted six U.S. Opens, most recently in 1996 when Steve Jones held off Tom Lehman and Davis Love III. It’s where Ben Hogan won in 1953 when he famously said he brought “this Monster to its knees.” It also has hosted three PGA Championships, most recently in 2008 when Padraig Harrington beat Sergio Garcia. And it hosted the Ryder Cup in 2004, a record victory margin for Europe.

The PGA Championship is unlikely to return because it now is held in May and Oakland Hills remains in Michigan. The U.S. Open is moving to a rotation of five courses as the anchor, allowing room for others. The U.S. Open’s next opening is in 2028.

PUT A STAMP ON IT

U.S. Women’s Open champion Yuka Saso received quite an honor last week when the postmaster general of the Philippines declared that she would be featured on a stamp for her “unprecedented victory.” Saso, who also won two gold medals at the 2018 Asian Games, is the first Filipino to win a major.

How big is this honor? She acknowledged that it’s “pretty cool.”

But there are questions: What is a stamp? How exactly does it work?

A surge in the late spring was more than enough for Garrick Higgo, Richard Bland and Guido Migliozzi to be among five players to earn spots in the British Open.

As for the Americans? The strength of field is so lopsided in favor of the PGA Tour that no player was exempt from a FedEx Cup category.

The British Open took the leading five players from the top 20 in the Race to Dubai after last week's BMW International Open. Those spots went to Migliozzi, Jason Scrivener, Higgo, Bland and Dean Burmester.

The British also took the leading five from the top 20 in the FedEx Cup through the Travelers Championship. The top 20 already were exempt, including four from the world ranking that was used a month ago.

Amy Yang shot 64 in the final round of the KPMG Women's PGA Championship to tie for ninth. It was her 18th top-10 finish in the majors without ever having won one. ... The Australian Open returns the last week in November after being canceled a year ago because of the COVID-19 pandemic. It will be played Nov. 25-28 at the Australian Golf Club in Sydney, followed by the Australian PGA at Royal Queensland. ... The winner of the Kazkada Golf Challenge on the Challenge Tour in the Czech Republic this week earns a spot in the British Open. ... Lizette Salas with her runner-up finish moved up 24 spots to No. 21 in the women’s world ranking. She moved past four players and is in the top spot for the two Solheim Cup picks that come off the ranking. ... Ryder Cup captain Steve Stricker says he will skip the U.S. Senior Open next week to play in the John Deere Classic, where he is a three-time winner. The Deere is celebrating its 50th anniversary.

Nelly Korda at 22 is the oldest of the LPGA Tour's three major champions this year. The others were 21-year-old Patty Tavatanakit in the ANA Inspiration and 19-year-old Yuka Saso in the U.S. Women's Open.