Power signs with Sabres as Michigan to NHL exodus begins 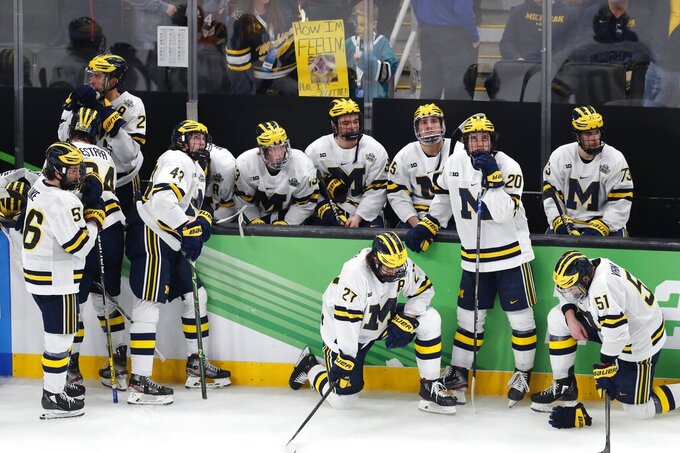 Owen Power is trading in Michigan maize and blue for the blue and gold of the Buffalo Sabres, and he is far from the only Wolverine making the leap to the NHL.

The Michigan exodus is underway less than 24 hours after the loaded Wolverines were knocked out of the Frozen Four short of a national title.

Before Power inked his deal with Buffalo on Friday, teammates Kent Johnson and Nick Blankenburg signed with the Columbus Blue Jackets. Matty Beniers and Brendan Brisson might not be too far behind in the aftermath of Michigan's overtime loss to Denver in the NCAA Tournament semifinals.

Sabres general manager Kevyn Adams said Power is expected to join Buffalo in Florida on Saturday and is tentatively scheduled to make his debut Tuesday at Toronto.

The 6-foot-6, 214-pound defenseman was more than a point-a-game player for Michigan, had a hat trick at the world junior championship before it was called off and played almost 22 minutes a game for Canada at the Winter Olympics in Beijing. Power will get some valuable experience by suiting up with the Sabres, who will not make the playoffs for the 11th consecutive season.

“When you add it all up, it was a great development year for him,” Adams said. "Regardless of how talented he is, he’s still a young player and we want to keep helping him get better and better and set him up for success. Really am proud of how he handled himself during this season on and off the ice and just excited to get him in a Sabres uniform.”

Johnson signed a three-year, entry-level contract like Power while Blankenburg got a one-year deal. They are expected to join their new team Monday and could also get plugged into the Blue Jackets lineup right away.

Blankenburg was a free agent, while Johnson was the fifth pick in the 2021 draft. The skilled 19-year-old forward had 17 goals and 47 assists in his final college season and had five points in four games at the 2022 Olympics representing Canada.

“Kent Johnson is a remarkable young man both on and off the ice,” Blue Jackets general manager Jarmo Kekalainen said. “He is a highly-skilled and creative player who can bring you out of your seat whenever he’s on the ice."

There are similarly high hopes for Beniers and Brisson, who starred for the U.S. at the Olympics on a team featuring more than a dozen college players. Beniers could soon join the expansion Seattle Kraken after they took him second in the draft, while Brisson was a 2020 first-round pick by Vegas.

Adams said he also spoke with Portillo, who was in goal for the loss to Denver. It was not clear what Portillo's path forward might be, but the Sabres did not have much doubt Power would join them and play in the NHL quickly.

“This stretch of games until the end of the season is so critical for him because you feel the NHL game, you get a good understanding of what you need to do to prepare yourself to play, the speed of the game, physicality — all of it,” Adams said. "He’ll take that into his offseason and just the way he’s wired (he) is the type of kid who processes things very quickly and he’ll learn quickly.”