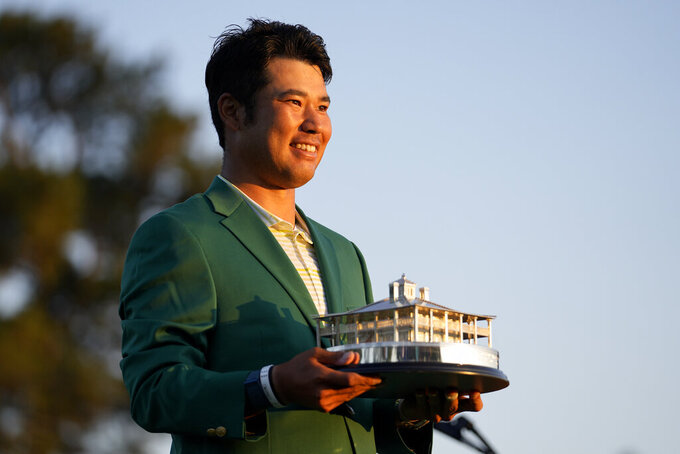 TOKYO (AP) — Led by Japan's prime minister, the country celebrated golfer Hideki Matsuyama's victory in the Masters — the first Japanese player to win at Augusta National and pull on the famous green jacket.

“It was really wonderful,” Prime Minister Yoshihide Suga said with his country struggling to pull off the postponed Tokyo Olympics in just over three months. “As the coronavirus drags on, his achievement moved our hearts and gave us courage."

Masashi “Jumbo” Ozaki, who tied for eighth in the Masters in 1973, said he hoped more Japanese male golfers would be inspired by Matsuyama.

“This is a great achievement for the Japanese golf world," he said in comments on Japanese media. “And it came about because of Mr. Matsuyama’s own ability to take up challenges, his courage and all the effort that went into that.”

Isao Aoki finished second to Jack Nicklaus in the 1980 U.S. Open, the previous best finish by a Japanese male golfer in a major.

Aoki recalled how Matsuyama won the low amateur title in the 2011 Masters just weeks after the earthquake, tsunami and the meltdown of three nuclear reactors devastated the northeastern Fukushima area of Japan.

About 18,000 people died in the disaster and the area is still struggling to recover.

“This time, your Masters win came at a time when many people were feeling down, with many activities restricted in Japan amid a coronavirus pandemic, and you gave hope to so many people,” Aoki said in comments carried online in Japanese in Golf Digest.

Aoki added: “This win, which was the first for a Japanese as well as an Asian, was a moment we were all waiting for, not just myself but all the Japanese golf fans and those involved in the golf world.”

Nicklaus was as equally effusive on social media.

“I’ve been blessed to spend a lot of time in Japan and I know they love the game of golf," Nicklaus said. “They’re also very proud people and they’re even prouder today!

“I competed against the great Isao Aoki, and know how revered he was and is. Hideki will also now forever be a hero to his country. The day and moment belongs to Hideki Matsuyama . . . this is a great day for him, for Japan, and for the global game of golf!”

The U.S. Embassy in Japan sent its congratulations to Matsuyama as “the first Japanese golfer to win The Masters.”

“For him, I think it was a goal that was hard to reach despite his tremendous efforts over the past 10 years,” Atsumi said. “I think it’s absolutely fantastic that he was able to achieve the goal today. I think he set a great milestone for the next generation of Japanese people.”