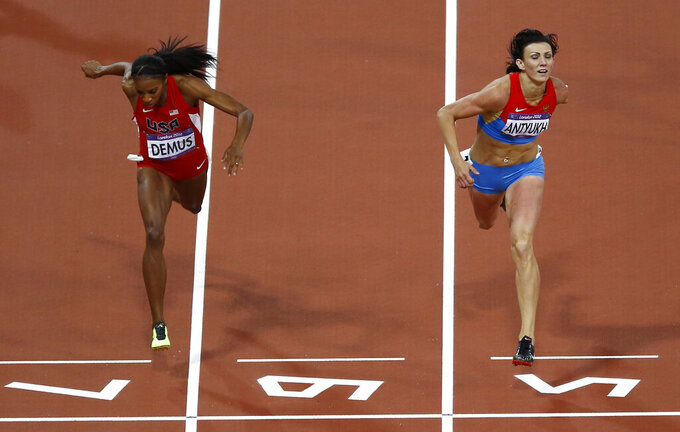 FILE - Russia's Natalya Antyukh, right, powers ahead of United States' Lashinda Demus to win gold in the women's 400-meter hurdles final during the athletics in the Olympic Stadium at the 2012 Summer Olympics, London, Wednesday, Aug. 8, 2012. Russian runner Natalya Antyukh was disqualified on Monday, Oct. 24, 2022 from her 400-meter hurdles win at the 2012 London Olympics for doping, and Lashinda Demus of the United States is set to be upgraded to the gold medal. (AP Photo/Daniel Ochoa De Olza, File)

MONACO (AP) — Russian runner Natalya Antyukh was disqualified on Monday from her 400-meter hurdles win at the 2012 London Olympics for doping, and Lashinda Demus of the United States is set to be upgraded to the gold medal.

Antyukh was already serving a four-year ban in a previous case judged by the Court or Arbitration for Sport last year that stripped her results from 2013 to 2015.

The new ruling based on historical evidence recovered from a Moscow testing laboratory database further disqualified Antyukh in all of her events from July 15, 2012 through June 29, 2013, track and field’s Athletics Integrity Unit said.

Now aged 39, Demus is in line to become an Olympic champion for the first time and get a gold medal from the International Olympic Committee to add to her world title won in 2011.

The bronze medalist 10 years ago, Zuzana Hejnová of the Czech Republic should be upgraded to silver, and the bronze is set to go to Kaliese Spencer of Jamaica.

The AIU did not specify evidence against Antyukh from the Moscow database that was part of a years-long standoff between the World Anti-Doping Agency and Russian authorities.

The latest case was prosecuted at national level in Russia and can be appealed, the Monaco-based AIU said.