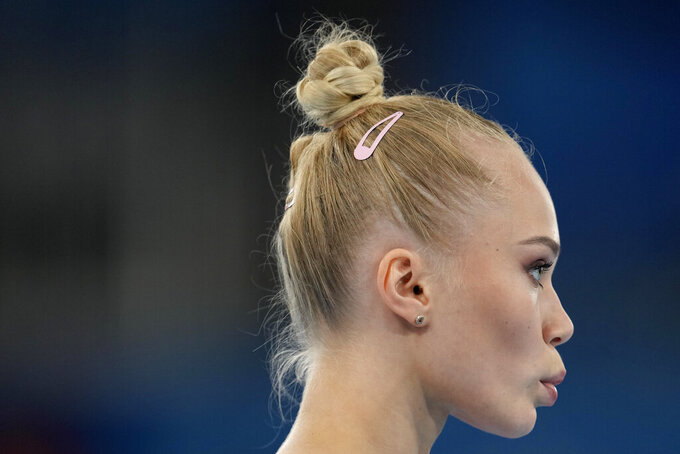 Angelina Melnikova, of the Russian Olympic Committee, stands to perform on the vault during the women's artistic gymnastic qualifications at the 2020 Summer Olympics, Sunday, July 25, 2021, in Tokyo. (AP Photo/Natacha Pisarenko)

TOKYO (AP) — The trouble started early. A step out of bounds on floor exercise here. A short landing there.

Over the course of two hours on Sunday, the mistakes — some almost imperceptible, some laid bare for the world to see — kept piling up, chipping away at the aura USA Gymnastics has built over the past decade. Not even the greatest of all time was immune to the realities of a sport where perfection is unattainable.

For 11 years, the Americans flirted with it, at least from a competitive standpoint, flying all over the globe, then flying back home with their suitcases stuffed with gold.

It still might happen at the Tokyo Olympics. But for the first time in a long time, it appears it won't happen without a fight.

Russia pulled off a stunner in qualifying, posting a top score of 171.629, more than a full point ahead of the U.S. total 170.562. While reigning Olympic champion Simone Biles topped the all-around with teammate Sunisa Lee close behind in third, the Americans ended their session looking up at another name on the scoreboard in the team standings for the first time since the 2010 world championships.

“This was not the finals,” U.S. high-performance director Tom Forster said. “This was getting into the finals. So this might be a great awakening for us and we’ll take advantage of it.”

China, France, Belgium, Great Britain, Italy and host Japan also advanced to Tuesday night's final. Olympic legend Oksana Chusovitina's journey is over. The 46-year-old from Uzbekistan did not qualify during the vault final at her record eighth Olympics.

Athletes, judges and administrators rose to their feet to salute Chusovitina as she made her way off the floor. She waved to the crowd with tears in her eyes before posing for pictures with whoever wanted one.

“I’m saying goodbye to sports,” Chusovitina said. “It’s kind of mixed feelings. I’m alive, I’m happy, I’m here without any injuries, and I can stand on my own.”

Something the Americans have done in the team competition for 10 years. After going largely unchallenged over two Olympic quads, they suddenly have company.

Forster raised eyebrows following the Olympic Trials last month when he said taking the top four finishers in the all-around in rank over a squad that could potentially score a bit higher by taking a specialist didn't matter. He reasoned sacrificing a tenth or two here or there wasn't going to matter based on the history of blowout wins by the Americans at world championships since he took over in 2018.

“We thought it was a good order, and I still feel good about it,” Forster said, who later added, “it will all work out.”

It always has since Biles joined an already dominant program in 2013. Everything will be reset for the finals, when the format changes to three-up/three-count. The pressure will be greater. And the Americans have found a way to thrive under it.

Inside a largely empty Ariake Gymnastics Center, they finally faltered. At least by their towering standards.

Not even Biles was immune.

While the 24-year-old star topped the all-around with a total of 57.731 and advanced to the finals in all four events, it didn't come easy. She backpedaled all the way off the mat following a tumbling pass on her floor exercise, then basically did the same on vault. She responded with a solid set on uneven bars, but a spectacular beam routine ended with her temporarily reeling following her dismount, something Forster said he's never seen her do.

Biles, who came to Japan as the face of the U.S. Olympic movement and possibly the Games themselves, saluted the judges then walked off the podium with a smile that looked like a combination of relief, sarcasm and frustration.

There was plenty to go around.

Jordan Chiles' relentlessly consistent run that carried her to a spot on the team ended with a major mistake on bars and a fall on beam. Grace McCallum stepped out of bounds on floor. Lee had two of her scores (vault and floor) dropped in the team competition, though her electric bar set helped her surge into third behind Biles and Brazil's Rebeca Andrade.

The biggest bright spot for the Americans may have been the spectacular performance by Jade Carey. Competing as an individual after earning a nominative berth through the World Cup circuit, Carey earned a spot in the vault and floor exercise finals and only missed out on the all-around due to the rules that limit finals to two athletes per country.

Carey's decision to pursue an individual berth is symbolic of the depth the Americans have enjoyed during their rise to supremacy. Yet they no longer appear to have the market cornered on excellence.

ROC's performance's offered proof that the former gymnastics superpower is in the midst of a resurgence led by 21-year-old Angelina Melnikova. Even better, the Russians survived the balance beam relatively unscathed.

The 4-inch piece of wood set 4 feet off the ground has been the place where the country's gold-medal hopes have gone to die in recent years, yet there were no major issues during qualifying. The only serious miscue came when Lilia Akhaimova fell off during the end of an acrobatic series. No biggie. The Russians were allowed to drop her score.

Things will be different in the finals, when the margin for error disappears. While Melnikova stressed she didn't want to forecast what might with a medal on the line, she believes what has long been a walkover for the Americans will turn into something far more compelling.

“We hope that (we win),” Melnikova said. "We’re also going to struggle and fight. We have to. That’s the expectation for us.”

And suddenly, it looks doable.