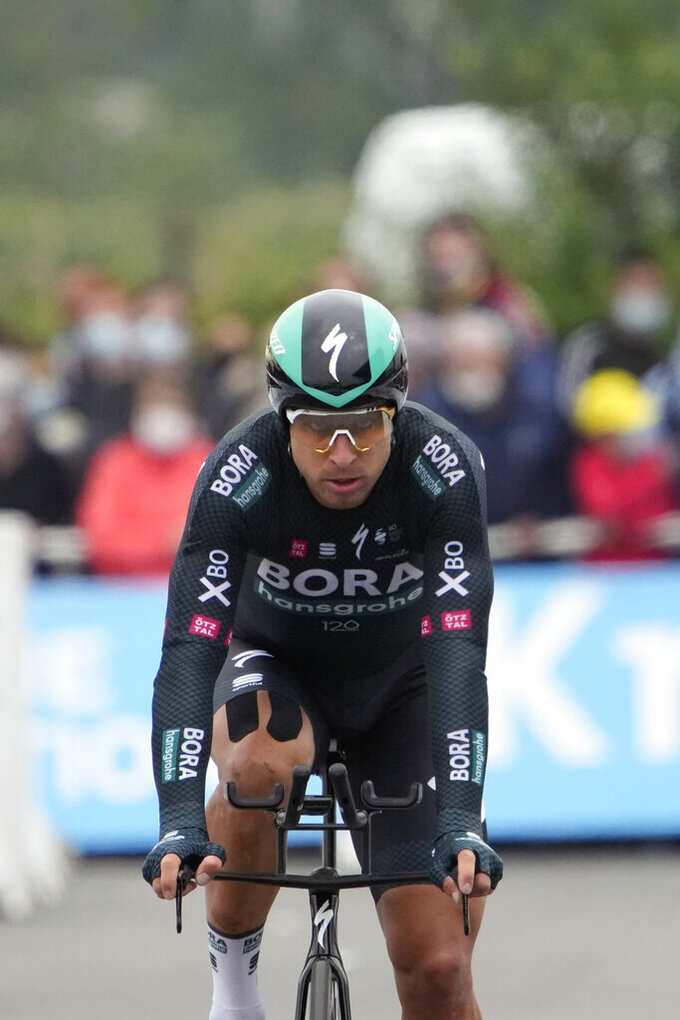 Three-time world champion Peter Sagan withdrew from the Olympic road race Tuesday, a day after minor surgery to treat an infection in his knee, eliminating another potential favorite less than two weeks before the start of the Summer Games.

Sagan hurt his knee when the chainring of his bike left a deep gash during a crash near the end of the third stage of the Tour de France. He continued on while his Bora-Hansgrohe team treated the injury with antibiotic ointment, but an infection set in and Sagan was forced to withdraw and have surgery Monday in Monaco.

The 31-year-old Sagan was supposed to ride alongside brother Juraj in the Olympic road race on July 24. The Slovak Olympic Committee confirmed Tuesday that he would be replaced by Lukas Kubis in one of the first medal events of the Games.

“We did everything possible on site at the Tour, but even antibiotic treatment couldn’t prevent an infection,” said Bora-Hansgrohe team physician Christopher Edler. “The only option was to stop racing and get the bursa surgically removed. ... The surgery went well, and I think Peter will be able to start with light training again in a couple of days.”

Sagan would have been a medal favorite on the punchy Olympic course. It starts at Musashinonomori Park, climbs the slopes of Mt. Fuji and finishes at the Fuji Speedway west of Tokyo. That profile should favor riders such as Sagan, who have enough climbing ability to tackle the ascents and enough speed to win a sprint from a reduced field.

“Luckily, it was a superficial infection and the knee joint is not involved in this at all,” said Sagan, who hopes to resume training in the coming weeks. “I’d like to thank the doctors and medical staff at IM2S clinic in Monaco for performing an excellent surgery on such short notice and for their great cooperation with the team’s medical staff.”

Also withdrawing from the Olympic road race Tuesday was Jack Haig, who is recovering from a broken collarbone that he suffered during the same stage of the Tour. The Australian had been holding out hope he could recover quickly enough for Tokyo.

“Unfortunately my fracture was much worse than first expected. The surgery was long and more invasive than normal, making the recovery period longer,” Haig wrote on Instagram. “I should hopefully be outside on the bike by the end of this week. Unfortunately, this means I will be missing out on the Olympics.”

The Australian team has been unsettled for weeks. Cameron Meyer withdrew to spend time with his ill father and was replaced by Lucas Hamilton, whose own spot is in doubt after he hurt his right shoulder during a crash at the Tour.

The only sure things at this point are Olympic veterans Richie Porte and Rohan Dennis on the four-man Australian squad.

Another nation that has struggled to put together its Olympic squad for the road race is France, which hoped versatile world champion Julian Alaphilippe and Romain Bardet would be in the mix. But despite being a likely favorite, Alaphilippe said last month that he would skip the Olympics to focus on end-of-season goals and the impending birth of his child, and Bardet told French newspaper L’Equipe soon afterward that he also would focus on his trade team.

“We have big goals with DSM that await us at the end of the season,” said Bardet, who came to his decision after consulting with French coach Thomas Voekler. “It was not possible to have peak form in Tokyo with this program.”