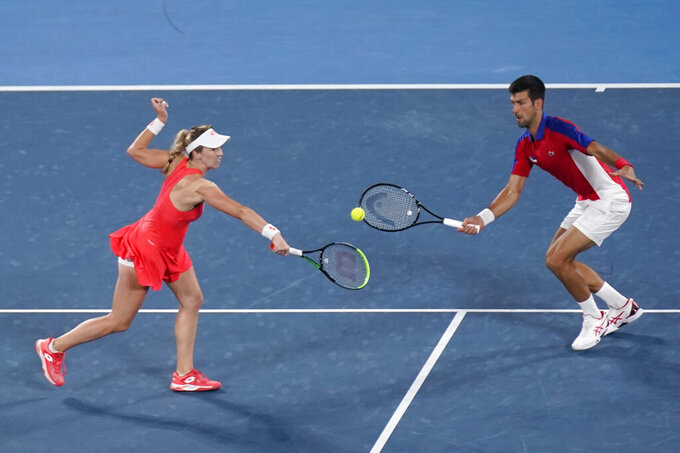 The Serbian mixed doubles team of Nina Stojanovic, left, and Novak Djokovic play during the quarterfinals of the tennis competition at the 2020 Summer Olympics, Thursday, July 29, 2021, in Tokyo, Japan. (AP Photo/Seth Wenig)

TOKYO (AP) — With so much on the line — the Golden Slam, the calendar-year Grand Slam, Olympic singles gold — it’s been a mystery to many why Novak Djokovic entered the mixed doubles tournament at the Tokyo Olympics.

Why risk injury or getting fatigued because of an event that doesn’t have much of a following and might distract from the more pressing goals within reach?

“I was against it. The whole team was against it,” Viktor Troicki, Serbia’s Olympic team coach and Davis Cup captain, told The Associated Press in an interview after Djokovic reached the semifinals in both singles and mixed on Thursday. “It was just him. He wanted to play.”

So there Djokovic was, partnering with Nina Stojanovic to beat the German pair of Laura Siegemund and Kevin Krawietz 6-1, 6-2 in a match that started less than two hours after he routed Kei Nishikori of host Japan 6-2, 6-0 in singles.

“I thought he had enough of tennis the last months," Troicki said. "Really, he played so much.”

Djokovic, who has already won the Australian Open, French Open and Wimbledon this year, needs the Tokyo Games title and the U.S. Open trophy in singles to become the first man to achieve the Golden Slam.

“Everyone was thinking about the singles,” Troicki said. “When he said he wanted to play mixed, I was like, ‘OK, (if) it means that much to him and he wants to prove that he’s ready and in the mixed matches he’s giving everything, he’s 100% focused on going all the way, then OK.’

“He’s looking for a harder challenge,” Troicki added with a laugh.

Marian Vajda and Goran Ivanisevic, Djokovic’s personal coaches, didn't travel to Tokyo. But Troicki has been talking to Ivanisevic.

Djokovic hasn’t lost a set yet in singles or mixed doubles.

But Djokovic could face his biggest test of the Olympic tournament against fifth-ranked Alexander Zverev on Friday — even though Djokovic holds a 6-2 career edge over the German and has not lost to Zverev in nearly three years.

“It’s probably the final before the finals,” Troicki said. “It’s going to be an interesting match.”

Karen Khachanov of ROC and Pablo Carreno Busta of Spain play in the other semifinal.

Troicki, who reached a career-high ranking of No. 12 in 2011, retired from playing after failing to qualify for Wimbledon this year. He was a teammate of Djokovic’s on the Serbian team that won the Davis Cup in 2010 — a title that many credit with giving Djokovic the motivation and belief that he could contend with tennis greats Roger Federer and Rafael Nadal.

More than a decade later, Djokovic matched Federer and Nadal with his 20th Grand Slam title by winning Wimbledon this month.

And if he completes the Golden Slam, he’ll also surpass both of his longtime rivals with his 21st major title at the U.S. Open and become the first man to win a calendar-year Grand Slam since Rod Laver in 1969.

The 34-year-old Djokovic is already the first man since Laver in ’69 to win the first three major tournaments in a season.

To Troicki, it doesn’t even matter what Djokovic does from here on in terms of the comparisons with Federer and Nadal — both of whom Djokovic holds winning records against.

“Already now, it’s obvious that he’s the greatest in our sport,” Troicki said. “The greatest ever to play and to achieve so many records.

"They’re both great champions, both Rafa and Roger, and I admire what they’ve done. But really Novak has (reached) new heights and new records and he’s for sure not going to stop here. He’s going to prove that he’s the best ever player.”

Still, Djokovic is often not as revered as Federer and Nadal are worldwide.

Among the Big Three, only Djokovic came to Tokyo, and whether he wins gold or not, he’ll be going for the calendar Grand Slam at the U.S. Open starting next month.

“He’s mentally ready for everything,” Troicki said. “What he’s doing in our sport is something special and he’s mentally tougher than anyone ever in this game.”