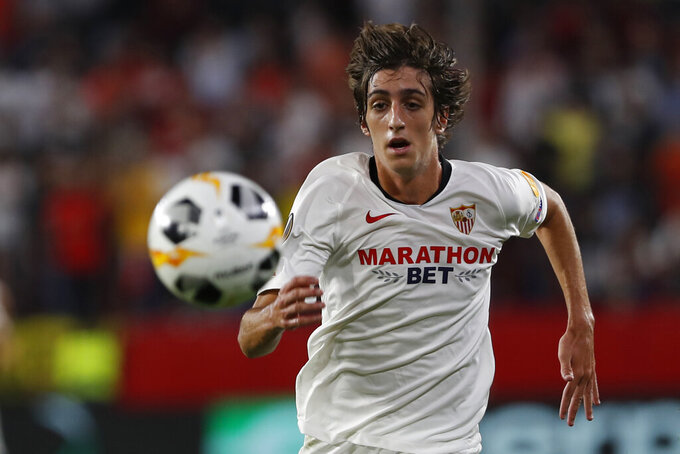 FILE - In this Thursday, Oct. 3, 20219 file photo, Sevilla's Bryan Gil goes for the ball during the Europa League group A soccer match between Sevilla and APOEL Nicosia at the Estadio Ramon Sanchez-Pizjuan stadium in Seville, Spain. Tottenham has signed Spain winger Bryan Gil from Sevilla with Argentine forward Erik Lamela moving in the opposite direction as part of the deal. Media reports say the package has cost Tottenham around $29 million. (AP Photo/Miguel Morenatti, File)

LONDON (AP) — Tottenham signed Spain winger Bryan Gil from Sevilla on Monday, with long-serving Argentine forward Erik Lamela moving in the opposite direction as part of the deal.

Gil, 20, who has agreed a contract until 2026 with the London club, will link up with his new team-mates at the conclusion of the Tokyo Olympics, where he is representing Spain.

“We are delighted to announce the signing of Bryan Gil,” Tottenham said on its website.

Gil progressed through the youth ranks at Sevilla before making his first-team debut in January 2019.

He spent last season on loan at Eibar, where he made 29 appearances including 26 top-flight starts. Gil won the first of his three Spain caps against Greece in March.

The 29-year-old Lamela's move ends an eight-year spell at Tottenham. He joined from Roma in August 2013 and made 257 appearances in all competitions.

“A club man through and through, we wish Erik all the best for the future,” Tottenham said.