Slafkovsky, 17, among standout stars in hockey at Olympics 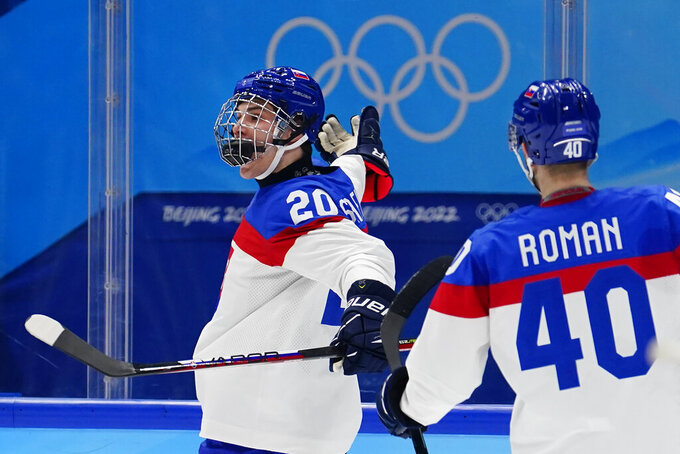 Slovakia's Juraj Slafkovsky (20) celebrates after scoring a goal against Finland during a preliminary round men's hockey game at the 2022 Winter Olympics, Thursday, Feb. 10, 2022, in Beijing. At right is Milos Roman (40). (AP Photo/Matt Slocum)

BEIJING (AP) — The best player so far in the men’s hockey tournament at the Olympics is also the youngest.

Juraj Slafkovsky of Slovakia is six weeks away from his 18th birthday and already drawing comparisons to Jaromir Jagr. The 6-foot-2, 218-pound forward is tied for the most goals at the Olympics with four. Slovakia coach Craig Ramsay said Slafkovsky actually reminds him of New York Islanders great and Hall of Famer Clark Gillies.

“He’s big and he’s strong, he skates well and he’s a great kid,” Ramsay said. "Slavy has the obvious advantage that he’s so big and strong, but he has good feet. He’s not just a slug that’s big. He can skate, he can jump, he can handle the puck and now that he’s shooting the puck a little bit more, you’re starting to see some good things happen.”

Slafkovsky, U.S. forward Sean Farrell and Sweden center Lucas Wallmark have been the standout stars of the tournament so far. Wallmark matched Slafkovsky in goals, and Farrell leads the Olympics with six points.

“I feel good,” said Farrell, who plays at Harvard. “I’ve found chemistry with my linemates, (Noah) Cates and (Ben) Meyers, right away and I think we’ve been playing well 5-on-5 and causing a lot of havoc in the O-zone and fortunately we’ve been able to bury our chances.”

Farrell is 3 of 3 on shooting for his three goals. Ramsay is just happy that Slafkovsky — who is projected to be a top-10, if not a top-five, pick in the NHL draft this summer — is putting the puck on net instead of deferring.

Through the first three games, Slafkovsky had all of Slovakia's goals.

“Before the tournament, if someone would tell me that I would score even one or two goals, I would laugh," Slafkovsky said. "But actually it’s happening, and I’m pretty happy.”

While Slafkovsky has surprised himself, Ramsay expected this kind of performance from the 17-year-old. Put Slovakia general manager Miroslav Satan in the impressed department.

“I am enjoying his game,” said Satan, who scored scored nine goals in eight games at the 1994 Lillehammer Olympics as a 19-year-old. “He’s two years younger than I was at my first Olympics. It was about time he’s showing he can be a goal scorer.”

So is Wallmark, who scored only 24 goals in 204 NHL regular-season and playoff games with Carolina, Florida and Chicago. Three of his four at the Olympics have come on the power play.

“I didn’t play that much power play over there, so of course that helps,” Wallmark said. “Just trying to get open and want the puck in the offensive zone. I’m just trying to find the net, and when you’re playing with good players, it makes it a lot easier.”

Slafkovsky is making it look easy and would like to try center at some point. Even after Slafkovsky struggled at the position at the world championships, Ramsay believes Slafkovsky could handle those responsibilities, but the focus this tournament is on producing and now trying to get Slovakia past Germany and into the quarterfinals, where it would face the United States.

While Slafkovsky and Slovakia defenseman Simon Nemec are the only 2022 draft-eligible prospects in the Olympics, the U.S. has three players taken in the first round over the past two years.

Farrell was a fourth-round pick of the Montreal Canadiens in 2020, but coach David Quinn has been hearing about him for years. Assistant Scott Young coached Farrell in youth hockey in Massachusetts.

“Talk about a highly skilled, highly competitive player with a high motor,” Quinn said of Farrell, who is listed at 5-foot-9. “He doesn’t certainly let his size get in the way of him being productive, he’s hard to play against and he’s played very well for us in a short period of time.”