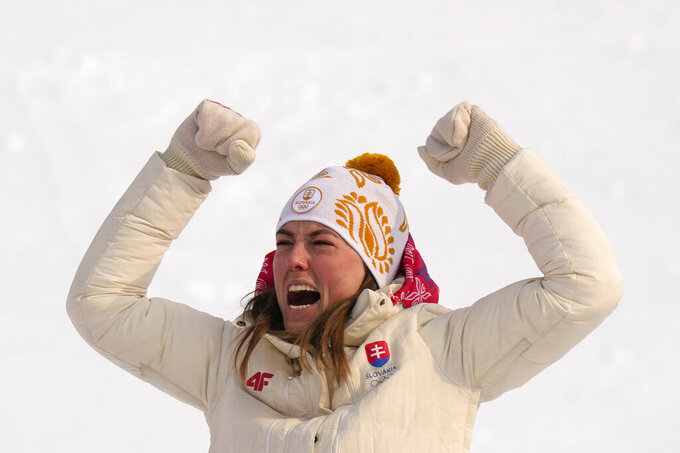 Petra Vlhova, of Slovakia celebrates during the medal ceremony after winning the gold medal in the women's slalom at the 2022 Winter Olympics, Wednesday, Feb. 9, 2022, in the Yanqing district of Beijing. (AP Photo/Luca Bruno)

BEIJING (AP) — Slalom gold medalist Petra Vlhova is leaving the Beijing Olympics early due to an inflamed left ankle tendon and will miss the Alpine combined event in which she would have been a challenger to Mikaela Shiffrin, the favorite in the race.

“Having reached her goal of gold in the slalom and considering this small physical problem, we are putting the priority on her next goals and we don’t want to risk making things worse by aiming for a medal in the combined,” Mauro Pini, Vlhova’s coach, told The Associated Press on Sunday.

Pini added that Vlhova also wants to make sure she has time “to go home and share this medal with those closest to her.”

Vlhova had already sat out the super-G and the opening downhill training session.

The Alpine combined is scheduled for Thursday. Vlhova finished second behind Shiffrin in the combined at last season's world championships in Cortina d'Ampezzo, Italy.

Last season, Vlhova became the first Slovakian to win the overall World Cup title. She trails Shiffrin by just 17 points in the overall standings this season, with a few more weeks of racing remaining after the Olympics.