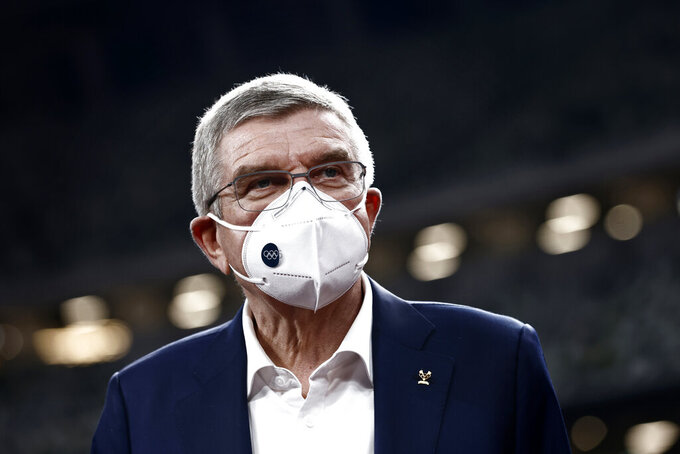 FILE - In this Nov. 17, 2020, file photo, IOC President Thomas Bach visits the National Stadium, the main venue for the 2020 Olympic and Paralympic Games postponed until July 2021 due to the coronavirus pandemic, in Tokyo. Bach has canceled a trip in May 2021 to Japan because of surging cases of COVID-19 in the country, the Tokyo Olympic organizing committee said Monday, May 10, 2021 in a statement. The trip was made impossible because of a state of emergency in Tokyo and other parts of the country that has been extended until May 31. (Behrouz Mehri/Pool Photo via AP, Fo;e)

CAPE TOWN, South Africa (AP) — South Africa has decided to vaccinate its Olympic athletes against COVID-19 with surplus local doses which were about to expire because an allocation from the International Olympic Committee hasn’t arrived.

South African Olympic officials were worried that if they didn't move ahead now — and use a different one-dose Johnson and Johnson vaccine and not the two-dose Pfizer inoculations offered through the IOC — they would run out of time before the Tokyo Games, the acting CEO of the South African Olympic committee told The Associated Press on Friday.

“We would never make it if we were vaccinating with two shots,” Ravi Govender said.

South Africa was working on a 28-day period between the first and second doses of Pfizer, Govender said. The Centers for Disease Control and Prevention in the United States recommends at least 21 days between the two Pfizer shots, while South African health experts have been working on a gap of up to three months between doses.

The Olympics is less than two months away, and Govender said there was “no formal communication yet” from the IOC when those 600 Pfizer doses allocated for the South Africa team would arrive.

“And they haven’t arrived in other parts of the world as yet,” Govender said.

The IOC didn’t immediately respond to a request from the AP for comment on the status of its larger vaccine program and the specific South African situation.

It is only three weeks since the IOC announced it secured a deal with Germany's Pfizer-BioNTech to supply vaccines to countries sending athletes to the Tokyo Games. The IOC said the vaccines would start being delivered to countries this month. The IOC previously said in March that it would provide Chinese vaccines for countries wanting them and which were competing at the Tokyo Olympics, which open on July 23 after a year's delay, as well as the Winter Olympics in Beijing in 2022. But that vaccine is not authorized for use in many countries, including South Africa, leading to the need to source Pfizer doses also.

The IOC says vaccinations are not compulsory for athletes and officials traveling to Tokyo, but they have been held up as another measure to bolster the IOC's stance that the Olympics will be safe and secure despite it being held in the midst of a pandemic and growing local public disapproval. Tokyo is under a state of emergency because of the pandemic.

South Africa's logistical challenges are also an illustration of the complications with an international sports organization rolling out vaccines to different countries, even if the intentions are good. Govender noted the IOC's "generosity" in offering the vaccines.

But, "you can’t just ship a vaccine in," said Prof. Glenda Gray, president and CEO of the South African Medical Research Council and one of the leaders of the Johnson and Johnson trial which is providing the doses for the South African Olympic team. “It has to go through a whole process.”

More than 500 South African Olympic athletes and coaches will be vaccinated with the J and J shots left over from a local clinical trial for health workers, and will effectively become part of the trial, too. They “had to agree to be part of the study,” Gray said. They will have to be monitored by the study leaders.

The world champion South Africa rugby team, which plays a series against the British and Irish Lions in July and August in South Africa, will also receive some of those trial vaccines, Gray said.

Although countries like the United States, Australia, New Zealand and others have said they are using their national vaccine stocks for their Olympic athletes, their vaccination rollouts are much further down the line than South Africa's. South Africa is Africa's hardest-hit country with more than 1.6 million reported COVID-19 cases and more than 56,000 deaths, and has a variant of the virus experts describe as more contagious. And, so far, South Africa has vaccinated only around 1% of its 60 million people.

So, South Africa has been wary to use its precious vaccines on young, fit athletes, especially when not even all health workers, the No. 1 priority, have received doses yet. That makes the IOC allocation even more valuable.

The South African Olympic committee went ahead with the plan to use the spare J and J doses from the trial on the understanding that those doses would be “replenished” by the IOC's Pfizer allocation, which will be put back into the country's national stock when it does arrive, Govender said.