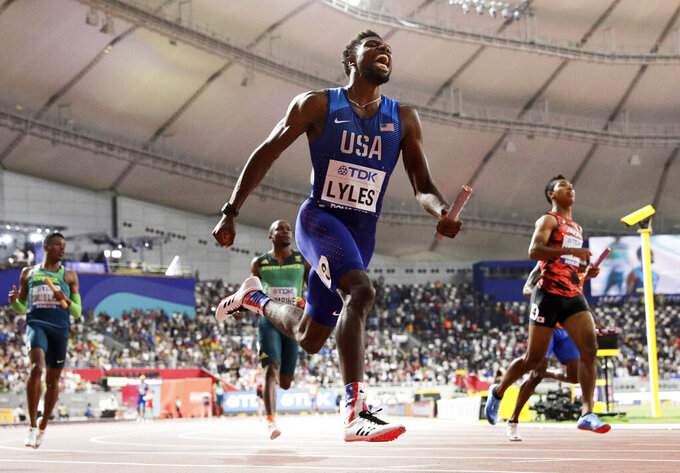 FILE - In this Oct. 5, 2019, file photo, Noah Lyles, of the United States, leads the team to gold in the men's 4x100 meter relay final at the World Athletics Championships in Doha, Qatar. Lyles is spending his time these days trying to process what's happening in his country — a land riven with protests, pain and questions in the aftermath of the killing of George Floyd. (AP Photo/Petr David Josek, FIle)

Noah Lyles could be a year away from occupying a uniquely symbolic position in sports: an African American sprinter wearing the letters “USA” on a medals stand at the Olympics.

Instead of contemplating how he might use that platform, Lyles is spending time these days trying to make sense of what's happening in his country — a land riven by protests, pain and questions in the aftermath of the killing of George Floyd.

“All you're seeing is your own people getting hurt and basically killed every day,” Lyles said in an interview with The Associated Press. “You can't get it out of your mind. And eventually, that starts to wander into your mind: Am I going to be next?'"

It's hardly the sort of life-and-death question that Lyles, or anyone, thought they'd be confronting in the lead-in to a summer of 2020 that is shaping up to be radically different than once expected.

Had sports not been shut down by the coronavirus pandemic, he'd be preparing for the beginning of Olympic trials next week. Come July, he would have been at the Olympics, the worldwide behemoth at which sprinters Jesse Owens, Tommie Smith and John Carlos, to name a few, ascended the broadest platform in sports and shone a bright, often unflattering, light on race — and the way the world and America think about it.

Instead, Lyles is shuttling between home and training in Florida, keeping a wary eye on the news, trying to figure out what to say and when to say it — in short, how to make a difference.

“I've definitely pondered it quite a few times, for many years, in fact," Lyles says. “You feel like there's change, but not enough change, and then you're thinking, ‘Well, shoot, it’s almost getting to be my turn, where I have to make a decision.'”

The process, which included a few to-the-point tweets earlier this week encouraging people to vote, is shedding light on a more serious side of the 22-year-old sprint star than has been seen so far. Until now, Lyles has mostly been portrayed as the free-spirited, effervescent speedster who is more than happy to take up where Usain Bolt left off when it comes to keeping his sport fun and eminently watchable.

A sometimes rapper with an eye for fashion, he ran, and won, the 200 meters at last year's world championships with his hair dyed silver. There was supposed to be more in store for this summer at the Olympics, where he and 100-meter world champion Christian Coleman were headed for a sprint showdown at both distances.

Lyles' outgoing nature has made it easy to overlook some of the challenges he faced growing up in Florida, North Carolina and Virginia: a sometimes debilitating struggle with asthma; diagnoses of attention-deficit disorder and dyslexia that complicated his schooling, especially in the early days.

He also faced the same issues as any African American boy — learning the harsh realities of what it means to be a black male in the U.S. The message Lyles' mom, Keisha Caine Bishop, sent continually: Dress nice, no baggy pants. Don't do anything that makes people perceive you as a threat.

“But the sad part is that no matter how nonthreatening you appear, you can still be a victim,” Bishop said. “You’re just trying to think of anything to get your kids home safely.”

Of the lifetime of slights and abuse that African Americans absorb, Lyles said: “I think a lot of people think it happens as a one-moment situation, which it doesn’t. It's more a buildup.”

So, what is a future Olympian, one who could be standing on that podium in a year, supposed to do?

His is one of hundreds of voices coming from a sports world — players, coaches, commissioners — some speaking as candidly as ever about America's racial divide in the aftermath of Floyd's death, which came after a white police officer pressed his knee on Floyd's neck for several minutes.

Across all sports, the Olympics has among the most longstanding and complex relationships between its leaders and its athletes of color, especially in the U.S. It's a history filled with missteps and miscommunications that has brought everyone from Muhammad Ali to Smith and Carlos to Owens into the conversation.

Most recently, the spotlight fell on hammer thrower Gwen Berry, who lashed out at the U.S. Olympic and Paralympic Committee for what she felt was a ham-handed attempt at expressing solidarity with black athletes following Floyd's killing. Last summer, the USOPC handed Berry a 12-month probation for raising her fist on the medals stand at the Pan American Games, a gesture that violates rules against political protests at the Olympics that have essentially gone unchanged over the 52 years since Smith and Carlos got kicked out of Mexico City for doing the same.

The Berry-USOPC imbroglio came during the same week as a pair of USOPC video town halls that gave athletes a chance to express their frustration and ask questions. What it didn't do, in Lyles' view, was add clarity to what an athlete can do at the Olympics, which are now rescheduled for next year.

“Some people are standing up and willing to lose their contracts and go into poverty to say this isn't right,” Lyles said. “And some people are saying `We're ready to protest inside the lines. But whoever we're competing for, we need to know how much they're backing us, because we need to know the repercussions we're going to take to go through this.'"

Max Siegel, the CEO of USA Track and Field, says his sport, which brings the majority of African Americans to the Summer Olympics, is trying to help the USOPC navigate this difficult territory. The USOPC has been reluctant to oppose the IOC, which earlier this year reiterated its stance against inside-the-lines political protests.

“Our athletes are amazing and they've got some real stories and some real struggles,” Siegel said. “They're socially conscious and it takes a lot of courage to step up and address a lot of issues that get swept under the rug.”

Count Lyles among those willing to step up. His message right now: educate yourself on the issues, get behind people and organizations who share your values, and vote.

“Go out and create campaigns for people who support our ideas and the belief that everyone can be equal," Lyles said, “and who support the idea that we might not have to go outside and die today.”