Stimulus aid for 'small business' will go to some big chains 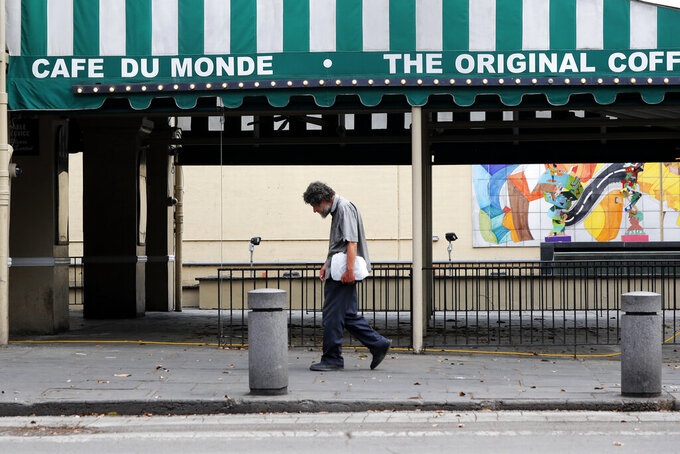 FILE - In this Friday, March 27, 2020 file photo, a man walks past the closed Cafe Du Monde restaurant in the French Quarter of New Orleans. It's normally bustling with tourists, but now nearly deserted due to the COVID-19 coronavirus pandemic. While rich in history and culture, New Orleans is economically poor, and many here are not necessarily well-positioned to weather this latest storm. (AP Photo/Gerald Herbert)

IOWA CITY, Iowa (AP) — As the federal government prepares to launch a $349 billion loan program meant to help small businesses survive the coronavirus pandemic, critics have growing concerns that some mom-and-pop shops might get squeezed out.

The Paycheck Protection Program — part of the $2 trillion relief package signed into law last week — was billed as a way to help local businesses that often form the fabric of communities retain workers and pay bills. But an expansive definition of “small business” in the law means that it will be open to much more than just Main Street shops when lenders start processing applications Friday.

Operators of name-brand hotel, restaurant and service chains and franchises with thousands of employees at locations scattered across the U.S. are eligible. Lobbyists are also pushing the Small Business Administration to interpret the law generously to help sectors devastated by mandatory business closures and stay-at-home orders, possibly making the aid available to international fast food and lodging giants and allowing individual owners to get around a $10 million cap on loans.

While Congress could approve more money later on, the program as it stands is expected to run out quickly. That could mean applicants who have the financial and legal expertise of a larger organization might be able to maximize their benefits, not leaving much for smaller businesses, especially those who wait or have problems applying.

“I’m certain that’s what’s going to happen,” said Lauren Friel, the owner of a wine bar in Somerville, Massachusetts, that has been closed for three weeks. “It makes me really angry. It’s outrageous. They are going to walk away with their pockets full of cash.”

Friel said she intends to apply Friday for around $50,000 to help her pay rent and employees who have been furloughed, but she's not expecting to be successful.

Independent contractors and the self-employed could be especially hurt since they will not be eligible to apply until April 10 under guidance from the Treasury Department. By then, banks could be overwhelmed with applications.

“It’s hard for me to say this: There is only $350 billion in this fund. Every big restaurant and hotel chain is going to be going after this money. It’s not going to last,” said Ron Feldman, chief development officer at ApplePie Capital, which has been helping businesses get ready to apply.

“If you want to get this loan, speed is your friend," Feldman told 2,000 franchise industry officials on a conference call this week.

Underscoring the need for help, the federal government reported Thursday that a record 10 million workers filed for unemployment in the two weeks ending March 28.

Jeff Brabant, manager of government relations for the National Federation of Independent Business, said he was still optimistic that the loan program would deliver for traditional small businesses.

“Our tone could change in a week if things don’t go well,” he said.

The program will give businesses low-interest loans of about 2.5 times their average monthly payroll. They will be fully or partially forgiven if businesses show that the money was used to retain or rehire employees and pay some overhead expenses through June 30.

The law specified that all food service and lodging businesses qualify as long as they do not have more than 500 employees at a single location. It also declared that thousands of franchises recognized by the SBA — like multilocation restaurants, hotels, gyms and hair salons — will qualify regardless of their revenue and ties to large corporate parents. Many nonprofits, which are normally ineligible for such aid, also qualify.

The law says the maximum loan will be $10 million. But lobbyists representing chains are asking that the cap apply to each location — rather than each owner.

The International Franchise Association argued in a letter to the SBA that would allow the program “to achieve its intended outcome and have maximum impact.” The letter urged the agency to confirm that franchisors it recognizes — that are the parent companies of major chains from Burger King to Marriott — qualify as well.

The agency is expected to issue additional guidance on the program Thursday.

Greg Flynn, CEO of the Flynn Restaurant Group, which calls itself the largest restaurant franchisee in the U.S. and owns more than 1,200 Applebee's, Arby's, Taco Bell and Panera locations, said larger employers should get relief, too, so that they can quickly rehire workers.

Flynn said that he furloughed 30,000 of his 48,000 employees as his company's revenue dropped by 60% in a matter of days. He is hoping to qualify for 2 1/2 times his $60 million monthly payroll under the program.

“It is my 100% total focus just to survive and keep the infrastructure in place, so there is a home for our employees to come back to,” Flynn said. “With (the rescue), we can do it. Without it, I don’t think we can.”

Darryl DePriest, who was chief counsel for the SBA office that advocates for small business from 2015 to 2017, called the $349 billion “almost like a first installment" and predicted Congress will eventually appropriate more money.

But for now, business owners who wait or have problems filing their applications might lose out to larger applicants, said Veronique de Rugy, a research fellow at George Mason University.

“When we look at back who were the beneficiaries of this, we’re probably going to see that it’s skewed toward the bigger of the so-called small businesses,” she said.