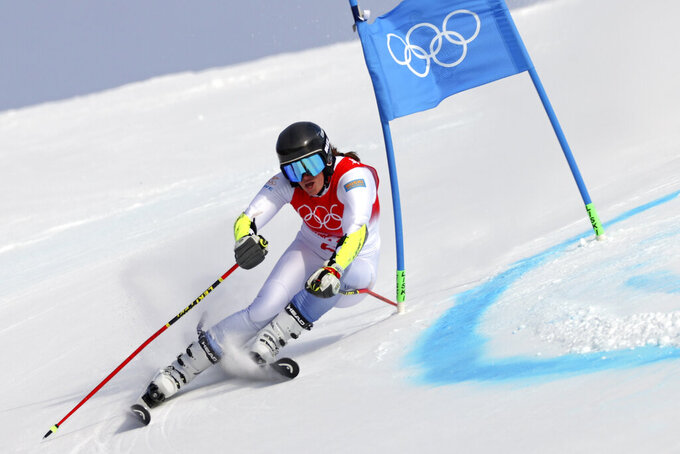 Sara Hector of Sweden passes a gate as she skis to the gold medal in the second run of the women's giant slalom at the 2022 Winter Olympics, Monday, Feb. 7, 2022, in the Yanqing district of Beijing. (AP Photo/Alessandro Trovati)

BEIJING (AP) — Sara Hector smiled when she crossed the finish line Monday and raised her ski poles to put them atop her helmet. She seemed to be laughing later, as if to say, “Did I really just do this?” while clutching her gold during the giant slalom medal ceremony.

And, yes, of course the Swedish racer was grinning widely when her coach and others hoisted her off the snow to celebrate a career-defining victory that seemed so improbable for so long yet somehow seemed inevitable lately.

Hector capped a recent career resurgence in the best way possible at the Beijing Olympics, claiming her first individual win at any major championship by finishing two runs down a course known as The Ice River at the Yanqing Alpine Skiing Center in a total time of 1 minute, 55.69 seconds.

She credited work with a mental coach, better equipment, improved technique and “working really, really hard” for turning her results around.

Hector earned her first World Cup race win all the way back in December 2014 — and then waited seven years to get No. 2 this past December. And then all of a sudden, as though she had discovered the secret to success, she tacked on Nos. 3 and 4 in January. Each was in a giant slalom.

That meant, according to Per Jonsson, Sweden’s coach for the technical events, that Hector went to the 2022 Games “coming in like a favorite, a little bit.”

Federica Brignone of Italy was 0.28 seconds slower over the two legs to add a silver medal to the bronze she won in the GS at the 2018 Pyeongchang Games behind champion Mikaela Shiffrin, who fell during Monday’s opening run hours earlier and was eliminated.

“She’s a super, super kind person, so I just got sad for her,” Hector said.

Lara Gut-Behrami of Switzerland was third, 0.72 behind Hector, and now has another bronze to go alongside the one she collected in the downhill at the 2014 Sochi Olympics.

Hector's past record at the top events in Alpine skiing? In four races across two previous trips to the Olympics, Hector never fared better than 10th place. And in 10 individual races across six world championship appearances, the best she did was coming in seventh (although she did share in three team event medals at worlds).

“Sara Hector has been climbing the whole season and it’s so incredible to watch her,” said Paula Moltzan, the top American finisher in 12th place.

After winning two weeks ago at San Vigilio di Marebbe, Italy, she tried to explain this recent run that put her atop the World Cup giant slalom standings heading to Beijing.

She said she is “easily wound up” and that created problems for her. But lately, Hector said then, she is able to “really feel calm” and that lets her focus better.

“It took me a long time to understand what I need,” she said then. “Now I know much more about what I need and that’s been cool to find out.”

Monday's race was delayed for about 15 minutes when American Nina O’Brien, who was sixth-fastest in the opening run, slid across the finish line, screaming in pain, after stumbling through the last gate as her skis crossed in front of her. She was checked by medical personnel and U.S. team staff before being taken away on a sled.

The skier right before, Tessa Worley of France, owner of four world titles and currently second in the World Cup GS standings, crashed on the lower part of the course, hitting a gate as she was attempting a left turn. She spun round, lost a ski and slid down the hill before rising and making it the rest of the way to the bottom.