For Sweeney and Britcher, decisions on luge future await 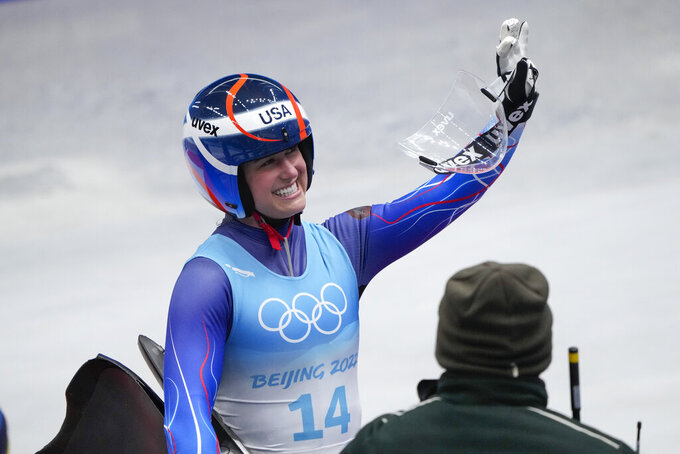 Emily Sweeney, of the United States, waves after finishing the luge women's singles run 3 at the 2022 Winter Olympics, Tuesday, Feb. 8, 2022, in the Yanqing district of Beijing. (AP Photo/Pavel Golovkin) 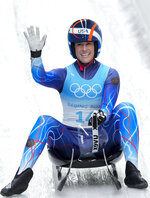 Their careers have already been, by any measure, a success.

And now both are facing the same decision — keep sliding, or retire.

The Beijing Olympics ended for the USA Luge veterans on Tuesday night; Britcher finished 23rd, Sweeney was 26th, each of them seeing their hopes of medaling doomed by crashes on Monday night during the opening two runs of the competition. Neither is certain what her future holds, and both are smart enough to know that it’ll take some time to figure out what’s best going forward.

“Right now, I’m taking away an incredible amount of joy and gratitude, especially for my coaches Bengt Walden and Lubo Mick,” Britcher said. “They’ve supported me unconditionally and were fighting for me every possible way. I wouldn’t have made it these last four years without them. I certainly wouldn’t make it through another four without them.”

Sweeney walked away from the Pyeongchang Olympics four years ago, her first Games, with a broken neck and broken back. She had to keep asking herself if all the hurting was worthwhile; now, she’ll have to ask herself if it’s worthwhile to do it for another four years.

“What I take away from this is that it can be really tough sometimes, but we can all do hard things, as cliche as that sounds,” Sweeney said. “I’m just proud that I did get through a lot of those hard times. That’s what I take away.”

Ashley Farquharson was the only U.S. woman to get four runs; only the top 20 after three runs get to advance to the fourth heat. Farquharson, in her Olympic debut, placed 12th and is expected to be part of the U.S. entry in the team relay on Thursday night. She’ll join Chris Mazdzer and the doubles team of Zack DiGregorio and Sean Hollander, who make their Olympic debut in the two-man event on Wednesday.

That race will be Mazdzer’s Olympic finale. It’s now up to Sweeney and Britcher to decide if they’ve had their last Olympic slides as well.

Farquharson was all smiles Tuesday night, and rightly so. And when she crossed the finish line, Britcher and Sweeney were smiling broadly as well as their roller-coaster-of-emotions night continued.

They were both a few minutes removed from shedding a few tears, though for the most part, they were happy ones. Britcher even made a math joke when she found out her final placing, noting that she slipped four places from the 2014 Sochi Games to the 2018 Pyeongchang Games — and did it again in Beijing.

“Wait, 23rd, really? That’s hilarious,” said Britcher, who raced at the Olympics with a broken middle finger that impeded her start — though she also made sure to say that the finger had nothing to do with her crash. “I went 15th in Sochi, then 19th in Pyeongchang, and now 23rd. So, if I had just done an Olympics when I was 4 years old, I probably would have won the whole thing.”

Britcher is still one of the best sliders in the world, even though the results didn’t back that up in Beijing. Same goes for Sweeney, who might be better now than she’s ever been.

“I’ve been through a lot of hard times,” Sweeney said. “That’s what I take away from this. I have more eyes on me from other countries than I’ve ever had. I’m actually sliding very well on the sled. People have been complimenting me from all different walks of sliding, which is crazy. It’s just that something’s missing. And in a sport that’s timed to the thousandth of a second, you can’t have something missing.”