Tough training pays off for South Korea with fencing gold 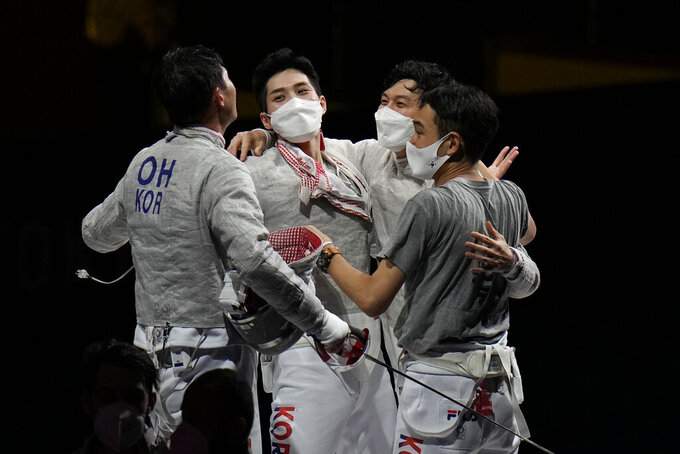 It’s the South Koreans’ first gold of the Tokyo Olympics in a sport other than archery.

No. 1-ranked sabre fencer Oh Sanguk carved out a big lead for South Korea with a 5-0 win over Italy’s Aldo Montano in the second bout. His teammates Gu Bongil, Kim Junghwan and Kim Junho went on to extend the advantage.

“We have very really hard training schedules," Kim Junghwan said. "We basically sacrifice our freedom and put everything into the training and that is the reason we could make the gold." He hasn't seen his wife for four months.

“I got married last year and I couldn’t really enjoy my first year of married life. I had to stay away for a while. It is sad because the only way we could communicate is with video call."

South Korea retained the title it won in 2012 when Gu and Kim Junghwan were also on the team. Team saber was off the Olympic program for the previous Games in Rio de Janeiro in 2016. Kim Junghwan becomes the first fencer from Asia with four fencing medals.

It was South Korea’s fourth gold medal in Tokyo. The other three were won in the team archery competitions.

Hungary took its third fencing medal in Tokyo with a 45-40 win over Germany for the bronze medal. That gave three-time individual saber champion Aron Szilagyi, widely ranked among the greatest fencers of all time, a first Olympic team medal to add to his other achievements.