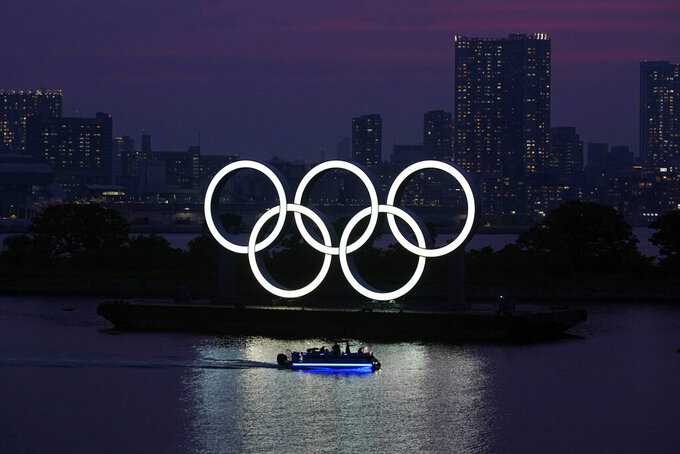 FILE - In this June 3, 2020, photo, the Olympic rings float in the water at sunset in the Odaiba section in Tokyo. Masa Takaya, the spokesman for the Tokyo Olympics, said Thursday, July 9, 2020, he’s confident the postponed games can be held in 2021 despite a recent poll in Japan in which 77% of respondents said they did not believe the games could be held next year. (AP Photo/Eugene Hoshiko, File)

Leaders of a newly formed athletes group are calling for a change to the rule that bans certain protests at the Olympics, saying it “is in fact preventing athletes from displaying Olympism at the Olympic Games.”

The board of The Athletics Association, a group of track and field athletes that formed this week to advocate for a greater athlete voice, says it wants changes that will allow athletes to “peacefully protest against social injustices in the world, without punishment or sanctions.”

Its statement, released Friday, said “very little has changed” since American sprinters Tommie Smith and John Carlos were kicked out of the 1968 Mexico City Games for raising their fists on the medals stand to protest racial inequality in the U.S.

The IOC earlier this year reiterated its support of the rule that restricts protests inside the lines at the games. But in the aftermath of protests that stemmed from George Floyd's killing in May, the committee said it would consider measures that would allow athletes to make stronger protests. The IOC is meeting this week.

Among the board members signing off on the statement are Allyson Felix, Christian Taylor, Emma Coburn, Shaunae Miller-Uibo and Shelly-Ann Fraser-Pryce.

The statement called on national Olympic committees to support athletes “by guaranteeing that any athlete that peacefully protests in the spirit of Olympism will face no sanctions or punishment.”

The U.S. Olympic and Paralympic Committee put hammer thrower Gwen Berry on probation after she raised her fist on the medal stand at the Pan-American Games last year. Berry was an outspoken critic of the USOPC earlier this year when it made public shows of solidarity with Black athletes, suggesting the USOPC never reached out to her on the issue.

The USOPC has formed an athletes' group to look into ways to combat racism, which could include calling for changes in the rule known as Rule 50.