Trial of Olympic sheikh on forgery charge pushed back 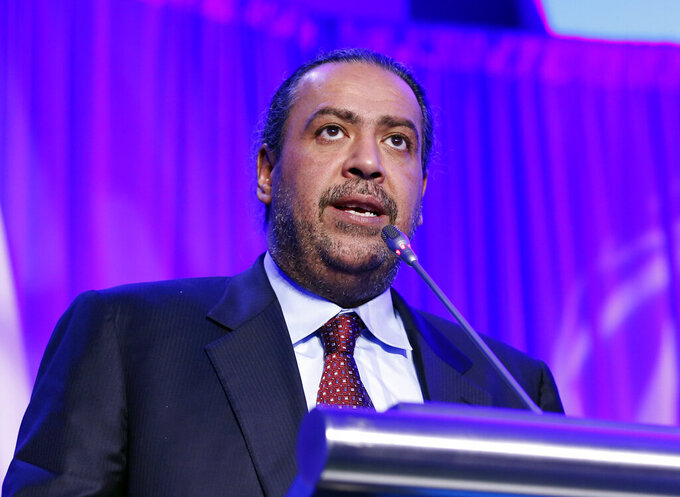 FILE - In this Thursday, Oct. 29, 2015 file photo, Kuwait's Sheikh Ahmad Al-Fahad Al-Ahmed Al-Sabah, president of the Association of National Olympic Committees (ANOC), speaks during a meeting of the Association of National Olympic Committees, in Washington. Olympic powerbroker Sheikh Ahmad al-Fahad al-Sabah will go on trial in Switzerland this month accused of forgery in a case linked to political rivalry in Kuwait’s royal family. Lawyers for the sheikh say he will attend the hearing listed by a criminal court in Geneva to run from Feb. 22-26, 2021. (AP Photo/Alex Brandon, file)

GENEVA (AP) — The trial of an influential Olympic official was adjourned Monday before any evidence was presented of alleged forgery to implicate a political rival in Kuwait in a fake coup plot.

Sheikh Ahmad al-Fahad al-Sabah, long known as the kingmaker of Olympic elections, appeared in criminal court in Geneva charged along with four others of forging documents. The maximum jail sentence is five years.

The panel of three judges adjourned the case because defendant Hamad al-Haroun — described in an indictment document as a former trusted aide to the sheikh — came to court without legal representation.

Lawyers are expected to be appointed for al-Haroun during the adjournment, which could last several weeks. One defendant, English lawyer Matthew Parish, did not attend but was represented and could be tried in his absence.

Sheikh Ahmad, with his trademark ponytail hairstyle tied back, declined to comment to The Associated Press after the two-hour hearing.

He denies the charge and his lawyer, Patrick Hunziker, said in court the sheikh had “no fear” of facing the accusations.

Prosecutors say Sheikh Ahmad, al-Haroun and three Geneva-based lawyers arranged a false arbitration case in the city in 2014 to help authenticate video recordings the sheikh had given to Kuwaiti authorities.

The footage appeared to show a former prime minister of Kuwait and a former speaker of its parliament plotting to overthrow the then-Emir of the oil-rich kingdom.

The former prime minister, Sheikh Nasser al-Sabah, and the family of Jassim al-Kharafi, the former speaker who has since died, filed the criminal complaint in Geneva more than five years ago.

A lawyer for Sheikh Nasser said the trial delay “is no surprise.”

"I think it should have been orchestrated between some parties,” lawyer Jean-Pierre Jacquemoud told the AP outside court.

Since being indicted in November 2018, Sheikh Ahmad has been “self-suspended” from two prominent Olympic roles. He has been an International Olympic Committee member since 1992 and has been leading the group of national Olympic bodies, known as ANOC, for nine years.

The sheikh has still been active in Asian sports politics while awaiting the criminal trial.

The Olympic Council of Asia, which the sheikh has led for 30 years, announced a deal in December that gave regional rivals Qatar and Saudi Arabia each one edition of the Asian Games. Doha will host in 2030 and Riyadh four years later.

The trial adjournment should extend Sheikh Ahmad's formal IOC exile beyond its presidential election at an online meeting on March 10. Thomas Bach is running unopposed.

The sheikh's lobbying for Bach in 2013 added to his kingmaker reputation.