US-Canada women's games off; US men forfeit at world juniors 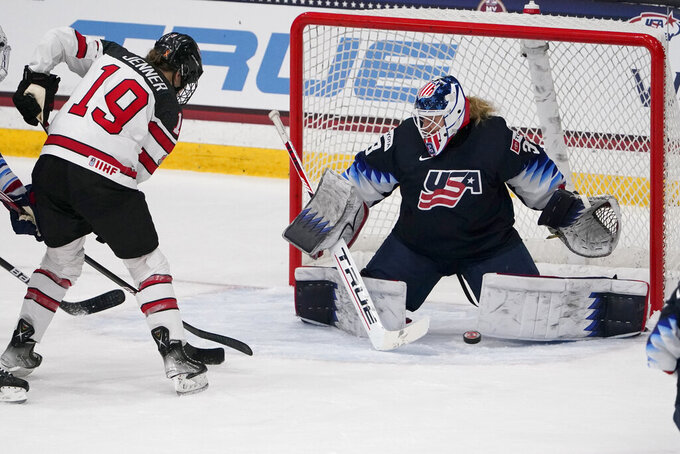 FILE - United States goalie Alex Cavallini, right, stops a shot from Canada's Brianne Jenner (19) during the second period of a women's exhibition hockey game ahead of the Beijing Olympics Wednesday, Dec. 15, 2021, in Maryland Heights, Mo. USA Hockey has asked the International Ice Hockey Federation to reconsider canceling the women's under-18 world championship that was scheduled to take place in Sweden in January 2022. t’s the second consecutive year the tournament has been canceled after the 2021 event was scrapped because of the pandemic. (AP Photo/Jeff Roberson, File)

The pandemic disrupted a pair of top events in international hockey Tuesday, with the two top women’s teams in the world calling off their final pre-Olympic tune-up games and the defending champion U.S. men forfeiting a game at the world junior championship.

Hockey Canada announced the final two rivalry series games against the U.S. were canceled because several players and staff on Canada’s women’s national team are in COVID-19 protocol.

“The risk associated with playing the final two Rivalry Series games with less than one month before our teams are set to compete in the 2022 Olympics is too high to finish our series with the United States,” Hockey Canada director of hockey operations Gina Kingsbury said. “We need to do what is right for our athletes from a health perspective and for our team preparation in order to ensure everyone remains healthy and eligible for Beijing.”

The U.S. and Canada were set to play Jan. 3 in Edmonton, Alberta, and Jan. 6 in nearby Red Deer. Canada had won four of the six exhibition games between the two rivals this fall and winter.

USA Hockey director of women’s national team programs Katie Million said the organization agreed with Hockey Canada that it was appropriate to cancel the games.

“With our team’s departure for China less than a month away, our focus is doing the absolutely best we can to make sure our players and staff are in a position to be able to participate in the Olympic games,” Million said.

Hours earlier, the U.S. was forced to forfeit its world junior game Tuesday against Switzerland after two players tested positive for the coronavirus. The tournament is also taking place in Edmonton and Red Deer.

Two positive COVID-19 test results led to a mandated team quarantine, and the U.S. as a result was unable to play under tournament rules.

“We’re extremely disappointed, especially for our players,” U.S. national junior team general manager John Vanbiesbrouck said. “We’re operating an ever-changing landscape, and that’s very challenging. We’ve followed the tournament protocol from the outside and will continue to do everything we can to ensure players have the opportunity to compete at the world junior championship.”

The International Ice Hockey Federation said the team’s quarantine status will be evaluated later to determine the status of the Americans’ next game scheduled for Wednesday against Sweden. Switzerland was awarded a 1-0 victory over the U.S. from the forfeit.

The U.S. is the defending champion at the tournament for the world’s best men’s hockey players under age 20. The U.S. beat Slovakia 3-0 Sunday night in its first preliminary round game.

Teams that traveled to Canada quarantined for two days after their Dec. 15 arrival with just over 5,800 tests conducted on 462 players, staff, and game officials before the tournament opened Sunday, according to the IIHF.

One Finnish player tested positive and was placed into isolation with no others on the team impacted. Two game officials were isolated after testing positive during quarantine.