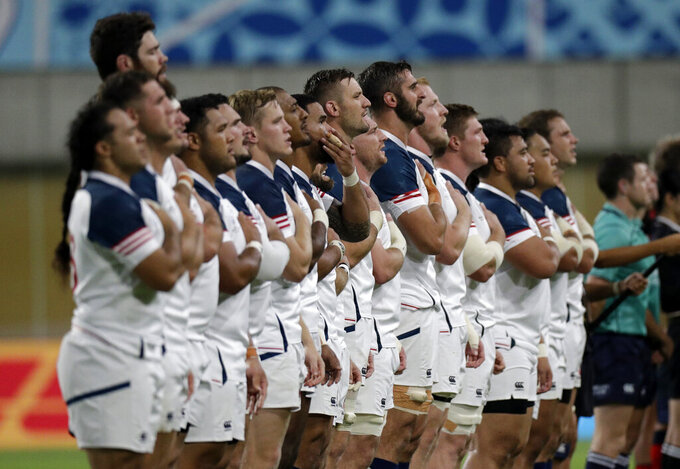 FILE - In this Thursday, Sept. 26, 2019 file photo, the US team sing their national anthem ahead of the Rugby World Cup Pool C game at Kobe Misaki Stadium, between England and the United States in Kobe, Japan. Being forced to file for bankruptcy during the coronavirus outbreak has not stopped American rugby leaders from retaining their long-held ambition of hosting an upcoming World Cup. A Rugby World Cup in 2027 would slot right between the soccer World Cup lined up for 2026 in the U.S, Canada and Mexico and the Los Angeles Olympics two years later. (AP Photo/Aaron Favila, File)

With the soccer World Cup lined up for 2026 and the Los Angeles Olympics two years later, the United States will be the focal point for sports later this decade.

Another worldwide event could yet be squeezed in the middle.

Seeking to get back on its feet after filing for bankruptcy during the coronavirus outbreak, USA Rugby retains a vision of bidding for the Rugby World Cup in 2027 and completing an all-American lineup of what, in some parts of the world, would be regarded as the three biggest events in sports.

“A Rugby World Cup (in the United States) would be the pinnacle of raising the profile of the game,” Bob Latham, U.S. rugby's most high-ranking official, told The Associated Press, “but we need to make sure we are ready to do it.”

How can a country go from financial oblivion to World Cup host in seven years, some will ask.

Never a power in the game on the field — indeed, they haven’t gotten out of their pool at a Rugby World Cup in eight attempts — the Americans nonetheless retain a vital place in global rugby because of the untapped potential they possess, in both a commercial and sporting sense.

“The United States market is of huge interest to World Rugby to tap into.”

Ross Young, chief executive of USA Rugby, told the AP that World Rugby immediately jumped in and helped fund the bankruptcy process when his organization “imploded” — as he described it — when the pandemic struck.

Already in a perilous position because of huge losses from a poorly attended Wales-South Africa test in Washington and overspending while preparing the men’s team for last year’s World Cup, Young said USA Rugby was thrown “into a tailspin” by the virus outbreak arriving just when the governing body was about to start a new membership cycle. There was also sponsor pull-back.

The decision to file for bankruptcy was announced on March 31.

“It gave us the opportunity to hit the reset button,” said Young, who detailed how his organization has removed the old-style congress system, decentralized community responsibilities, and is trying to form a sustainable business structure out of the national office.

“We are not completely out of the woods yet, but a lot of the hard yards have been done.”

It means American rugby leaders can contemplate the U.S. hosting a World Cup, either in 2027 or in ’31.

Latham is a former chairman of USA Rugby's board and is the country's member on World Rugby’s executive committee, so understands exactly what is at stake. He describes it as a “massive undertaking” but is encouraged by Japan successfully hosting the 2019 World Cup, which spotlighted the Asian rugby market.

The hosts of the ’27 and ’31 men’s World Cups will be announced at the same time — that decision will most likely be pushed back to 2022 now — and Latham said World Rugby may decide to choose one host for its commercial return and another for “potential growth of the game.”

“It’s something USA Rugby would be interested in, at the appropriate time, and it’s something that World Rugby certainly would be supportive of,” he said.

“The benefits of it would boost U.S. rugby and the global game.”

While success in the 15-a-side game has been hard to come by, the Americans are among the world leaders at the sevens version. The U.S. men’s and women’s teams placed second in the sevens world series in 2019 and would have been genuine gold-medal contenders for the Tokyo Olympics, which had to be pushed back to 2021 because of the virus.

Young and Latham put the teams’ impressive record in sevens down to being given more opportunity to play the world’s best on a regular basis, something that is not happening in 15s.

In the last World Cup cycle, the USA Eagles played just two games against tier one opponents. Japan, whose jump from tier two to one was all but confirmed by reaching the quarterfinals of a home World Cup, had 11, as World Rugby moved to try and ensure the Japan team gave an inspiring effort last year and opponents wanted to learn Japanese conditions.

“We are all aware 15s is a more complicated, more complex game, where you can’t just rely on pure athleticism," Young said. “Obviously there is much more focus on speed in sevens than game management, compared to 15s, but the raw materials are here.

“There has to be a balance of the global structure allowing more of us to play more often at the higher level.”

Recently re-elected World Rugby chairman Bill Beaumont made a global Nations Championship one of the priorities in his manifesto, and it remains to be seen whether the U.S. team will get to join a league that otherwise will comprise countries that make up Europe’s Six Nations Championship and the southern-hemisphere Rugby Championship.

Countries like Japan and Fiji would also believe they had a right to be included, certainly ahead of the United States on sporting grounds.

“How do you allow for the emergence of countries like Romania and Georgia in Europe to be able to play more matches, U.S. and Canada here, Uruguay in South America?" Latham asked.

“The value of a World Cup goes up if you have more competitive teams, and that's one reason why there's the impetus for World Rugby to look at it.”

Firstly, though, USA Rugby has to get its financial and administrative affairs in order.