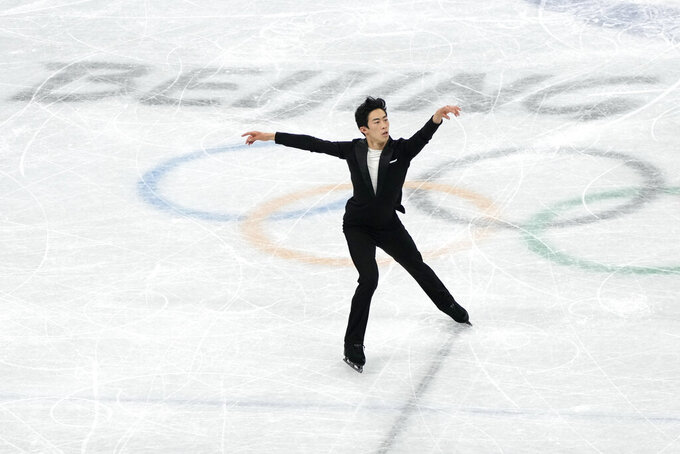 Nathan Chen, of the United States, competes during the men's singles short program team event in the figure skating competition at the 2022 Winter Olympics, Friday, Feb. 4, 2022, in Beijing. Chen, who was born and raised in the U.S. by Chinese immigrants, is competing for the U.S. team as a medal contender in men’s singles figure skating. (AP Photo/Natacha Pisarenko) 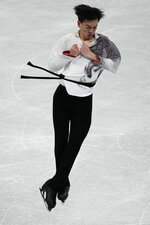 BEIJING (AP) — Nathan Chen had enough pressure on him heading into the men's program at the Beijing Olympics: One of the faces of the NBC broadcast, he is a suave, Nike-sponsored superstar whose marketability rivals his figure skating ability.

On Monday night, he was left worrying about whether he might test positive for COVID-19 before his event began.

That's because his teammate Vincent Zhou returned a positive test earlier in the day, shortly after Team USA won a surprising silver medal in the team event. Chen was left to wonder whether his own test might come back positive.

“I don't have much information other than the fact he tested for it,” Chen said after a late-afternoon final practice Monday, which was also attended by his biggest rival, two-time defending Olympic champion Yuzuru Hanyu.

“Everything out there is speculation,” Chen said. “Where did you get it? Where have you been going around? I've not really been around (Zhou) and any time that I've been around, I've been wearing a mask.”

Later Monday, Zhou announced he would have to withdraw from the men’s competition.

“I have been doing everything in my power to stay free of COVID since the start of the pandemic,” Zhou said in an emotional Instagram post. “I've taken all the precautions I can. I've isolated myself so much that the loneliness I've felt in the last month or two has been crushing at times."

Chen has been taking so much precaution that he wears his mask in the dining hall, only dipping it down to take a bite before putting it right back in place. He isn't taking any chances with what could be his final Olympics, especially given the long, four-year wait since his disappointing fifth-place finish at the Pyeongchang Games.

“I mean, you know, because it's happened — everyone is talking about it and thinking about it,” Chen said. “And hopefully that gets people involved a little bit more, being a little more careful and doing what they need to do.”

The showdown between Chen and Hanyu is one of the marquee events of the Winter Olympics, so much so that their programs will start around 10 a.m. in Beijing so that they can be broadcast in prime time in the eastern U.S. Many of the other events in which the American contingent is not expected to medal will take place in the evening in Beijing.

That's the kind of attention that the 22-year-old Chen has generated ever since leaving South Korea.

Rather than sit back and rest, Chen drilled even harder into his programs with his longtime coach, Rafael Arutyunyan, even while he juggled his studies at Yale. And the results came through on the ice, where Chen has won three consecutive world championships, pushed his national championship streak to six and has been generally unbeatable.

His only loss since Pyeongchang? To his teammate Zhou at Skate America last fall.

The reason he's been so dominant has been his array of quads, the jump that was once cutting edge but now has become standard fair. Most of the skaters in the field can land them but few do so with the degree of elevation, difficulty and, well, panache — not to mention the remarkable consistency that sees Chen rarely hit the ice.

The only quad that Chen has never landed — though he's tried a few times while goofing around in practice — is the quad axel, which involves 4 1/2 rotations. In fact, only a few have tried it in competition and nobody has ever landed it.

Hanyu could change that this week. He landed a couple of shaky ones during his final practice Monday.

“Yuzuru has definitely pushed me a lot,” Chen said. "Long before I competed against him, he was that benchmark for what an exceptional figure skater should be. I remember watching him when I was at the Junior Grand Prix Final, he was at the senior final and I was amazed at how good he was, how much he commanded the audience. He was a shining star.

“I went home,” Chen said, “and I was like: ‘Oh, man. That’s what figure skating is supposed to be like.”

Chen has had plenty of success in his head-to-head meetings with Hanyu since Pyeongchang. But while marquee events such as the Grand Prix Final are important, and the world championships are nearly the pinnacle of the sport, nothing tops winning a gold medal at the Olympics, and so far that is the one thing Chen has yet to accomplish.

If he continues to test negative, and takes the ice as scheduled, that quest begins anew on Tuesday in Beijing.