US women face Sweden as they prepare for Olympics 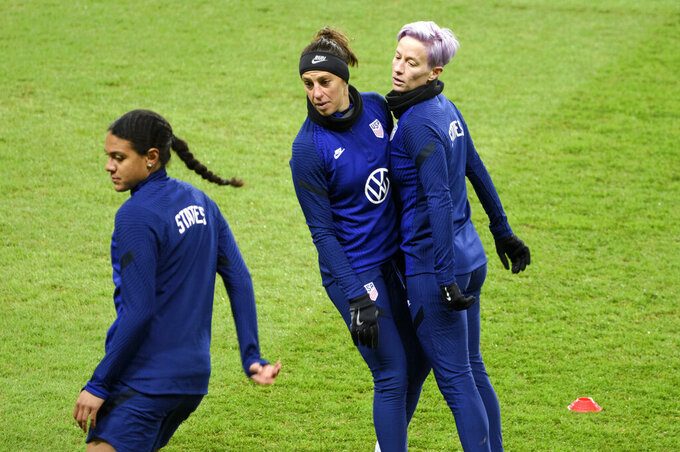 The U.S. national team continues its preparations for the Tokyo Olympics by playing the team that knocked the Americans out of the Brazil Games.

The United States plays Sweden on Saturday in Stockholm. The Swedes shocked the Americans in the quarterfinals of the 2016 Olympics, advancing on penalties after a 1-1 draw. Sweden went on to play in the final in Rio de Janeiro but fell to Germany.

A lot has changed since that game. Coach Peter Gerhardsson has replaced Pia Sundhage, who led Sweden in 2016. U.S. coach Jill Ellis stepped away from the team following its victory at the 2019 World Cup, making way for Vlatko Andonovski.

The memory of that loss to Sweden still stings a bit for the American players. It was the earliest exit ever for the United States in the Olympics. Both teams are again Olympics-bound.

“Obviously, there’s always going to be that bitterness behind us of the finish in 2016, that being the worst finish that we’ve ever had in an Olympics," Alex Morgan said. “There’s really no way to say otherwise. So, of course, when you think of it that way, we want to come back and be really dominant in the way that we play (in the Tokyo Games). This is that first stepping stone to that.”

The United States is the top-ranked team in the world. In Tokyo, the Americans will be vying to become the first women's team to follow up a World Cup victory with an Olympic gold medal.

The U.S team is 5-0-0 so far this year, including a three-game sweep in the SheBelieves Cup tournament. Overall, the United States has a 37-game unbeaten streak, including 16 straight wins.

Following the game against No. 5 Sweden, the United States travels to Le Havre for a match against No. 3 France on Tuesday.

The European road trip could be significant for Carli Lloyd, who has made 299 appearances for the United States. Only Kristine Lilly (354) and Christie Pearce Rampone (311) have crossed the 300-game milestone.

“I've looked up to Carli for a long time,” Samantha Mewis said in a conference call with reporters. “I feel like as a young player coming on this team, she set such a good example of just the way to take good care of yourself, to be a true professional and to really just not take no for an answer, to just put yourself out there all the time, be a little bit unapologetic about what you want and what you’re willing to do to get it.”

The game will keep many of the American players out of the start of the National Women's Soccer League Challenge Cup preseason tournament, which kicks off Friday.

Morgan, who plays for the Orlando Pride, said players will be rooting for their teams back home.

“We’re going to do everything we can to support our teammates,” she said. “I think it’s really frustrating just not being able to be there in general because I’ve been in Orlando now for six-plus weeks through preseason, since the end of SheBelieves, so to be putting in the work day in and day out like the rest of my national team teammates, and then to have the Challenge Cup scheduled in a FIFA window, it’s just really disappointing. So we’re going to do our part to support our team as much as possible and get back there.”