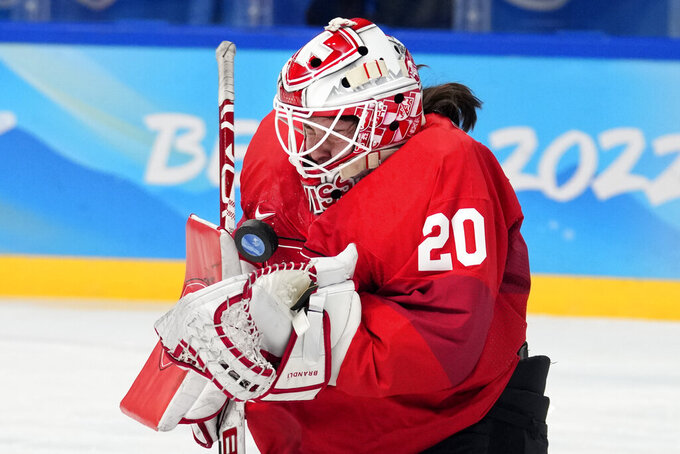 Switzerland goalkeeper Andrea Braendli (20) blocks a shot against the United States during a preliminary round women's hockey game at the 2022 Winter Olympics, Sunday, Feb. 6, 2022, in Beijing. (AP Photo/Petr David Josek) 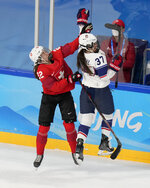 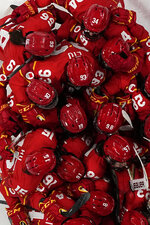 BEIJING (AP) — Having avoided questions about their heated cross-border rivalry all week because the focus has been on the next opponent, United States women’s hockey coach Joel Johnson and his players could finally address what’s been on everyone’s minds since the Beijing Winter Games opened.

The defending Olympic champions worked out their remaining kinks with a dominating 8-0 win over Switzerland on Sunday to prepare for their Group A finale against Canada on Tuesday.

Kelly Pannek and Jesse Compher also scored twice on a night 13 of 19 U.S. skaters earned at least a point.

“I was really happy with how we played. Just felt like we finally put together a full three periods," defender Lee Stecklein said. "Looking forward to hopefully a practice day tomorrow and then excited for Canada as always.”

The goal eruption came against a Swiss team which had been outscored by a combined 17-3 in losing its first two games, including a 12-1 loss to Canada on Thursday. It also provided the Americans some momentum a day after they had 62 shots but struggled finishing in a 5-0 win over the Russian team.

Cavallini, who won an NCAA championship with Wisconsin in 2011, won in her Olympic debut. She had considered retiring following the 2018 Winter Games.

“It was a long road to get here,” Cavallini said. “To be here again is really special and I seriously can’t thank my teammates enough for making it that much more special tonight."

The road became even longer when Johnson revealed the goalie had been dealing with “some injury stuff” in recent months, without being specific.

“For her to play as well as she has and to recover and to be in my mind at 100%, it’s just fun to see,” Johnson said. “She played great and all the credit goes to her.”

Cavallini’s best save came 8 1/2 minutes into the second period, in getting across to her left to stop the Swiss on a 2-on-1 break.

Johnson has now rotated in all three of his goalies, with Nicole Hensley getting the shutout against ROC.

Knight opened the scoring by driving to the net and converting her own rebound for a power-play goal 5:40 in. The game was essentially over when Compher, Knight and Pannek scored in a span of 2:11 to put the U.S. up 4-0 by the 16:15 mark of the first period.

Knight now has nine career Olympic goals to tie Monique Lamoureux-Morando for fifth on the U.S. list. And she increased her Olympic point total to 22, one behind Katie King, who ranks third.

Switzerland, making its fifth Olympic appearance, is being outclassed at Beijing after finishing fourth at the world championships in August, and eight years after winning the bronze medal at the Sochi Games.

Saskia Maurer, making her Winter Games debut, stopped 17 of 22 shots before being pulled after one period. Andrea Braendli finished with 41 saves over the final two.

Rather than be discouraged by the outcome, Swiss captain Lara Stalder said playing elite opponents such as the U.S. and Canada is an important measuring stick to see how much her team still needs to grow.

“We have a lot of young players that need to learn how to play those games, that you’ve got to do everything it takes for the team, and you’ve got to check your ego,” Stalder said, noting Switzerland is already guaranteed a spot in the quarterfinals.

“We can’t get too low. And we’ve got to battle tomorrow, maybe get a win tomorrow and then be ready,” she added, looking ahead to facing Finland.

In the day’s only other game, Le Mi scored the lone shootout goal to secure host China a 2-1 win over Japan. By virtue of the shootout loss, Japan (2-0-1) earned a point to secure one of Group B’s three spots in the quarterfinals, the furthest the nation’s women’s team has advanced in three Olympic appearances.

China (2-1), in its Olympic debut, can clinch a quarterfinal berth with a win over Sweden in its final preliminary round game, or with one more loss by Sweden (0-2) or Denmark (0-2).