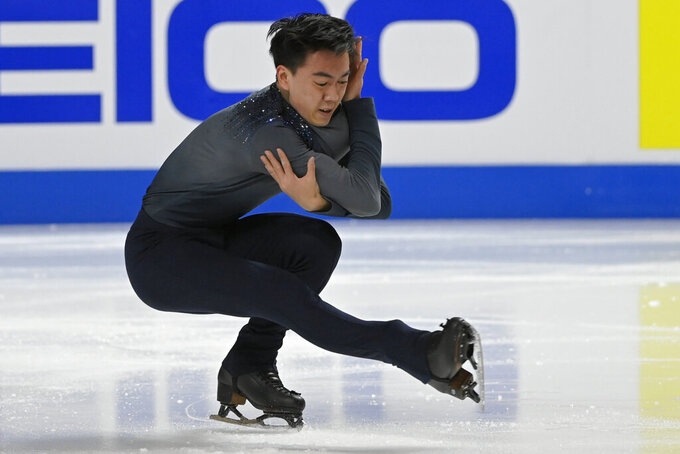 Not specifically on his jumps and spins and footwork, all of which must be precise when you are an elite figure skater. More so on just when he put everything together for perhaps the best performance of his career.

Zhou nailed practically everything at Skate America in October, the first of six Grand Prix series events, the main competitions leading up to February's Beijing Olympics. He was so good that even if three-time world champion Nathan Chen, who hadn't lost since the last Olympics, had been on his game, Zhou still might have won.

That showing could be a seminal one for Zhou should he build on it over the next few weeks, beginning at the NHK Trophy in Japan this weekend.

“That was crazy,” Zhou says of Skate America, where he also defeated 2018 Olympic silver medalist Shoma Uno of Japan, who will be in the field at NHK Trophy. Zhou finished sixth at the Pyeongchang Games. “Looking back on it, I think I'm just really happy with how things played out and to be able to capitalize on the opportunity after the short program. I realized that winning Skate America sets me up well for qualifying for the Grand Prix final, which is a great prospect.

“That time flies by really quickly, though. It is not really much time at all between events. With big events, there's always a big emotional and physical come down, and before you know it, it is the next competition.”

Still, a strong finish this weekend would elevate Zhou to the top level of medal contenders in Beijing, along with Chen, Uno and, of course, Yuzuru Hanyu, the 2014 and 2018 Olympic champion. Hanyu had to withdraw from NHK Trophy with a right ankle injury and it's possible he won't compete again until the Japanese nationals, if then.

While Zhou readily recognizes the powerful competition for the Olympic podium, he also knows he must concentrate on his journey. That's even more essential because just last March he fell apart in the short program at the world championships and didn't even qualify for the free skate. That forced him to participate in the Nebelhorn Trophy to secure a third men's Olympic spot for the United States, and in a clutch performance, he won Nebelhorn.

“The first thing my team and I did was sit down and start to analyze,” says Zhou, 21, whose team includes coaches Mie Hamada, Tom Zakrajsek and Drew Meekins and choreographer Lori Nichol. "We went over all the variables and factors, came up with detailed itemized action plans to address each of these to turn them into constants as much as possible.

“I really didn’t take too much time to wallow in misery or however you want to describe it, got right into training to build my strength base for next season.”

Zhou, who has taken a leave of absence from Brown University, always has had the jumps, including the necessary set of quads. He hasn't always landed them in competition, though his resume is quite solid, including bronze at worlds in 2019 and three silvers at nationals.

At Skate America, he had everything. He so impressed Scott Hamilton that the figure skating icon was effusive in his praise of Zhou.

“The way that Vincent looked at Skate America was world beating; man he was great,” Hamilton says. “These are all great talents and it comes down to who is going to lay it down and who is going to be able to collect the most points. If he is able to stay vertical he can beat just about anybody in the world.”

While Hamilton gushed, Zhou nearly blushed at such words.

“I am definitely motivated to make that statement true, and honored it came from Scott,” Zhou says. “I think in my mind I would like to have an offensive mindset and believe that statement is true, but I do recognize there are a lot of things I can clean up and improve on before I reach that gold standard. I do feel that I am capable of that and feel the potential. That really makes me want to go into the rink and work on everything all over again.”