Warholm's evolution: From running in jeans to world records 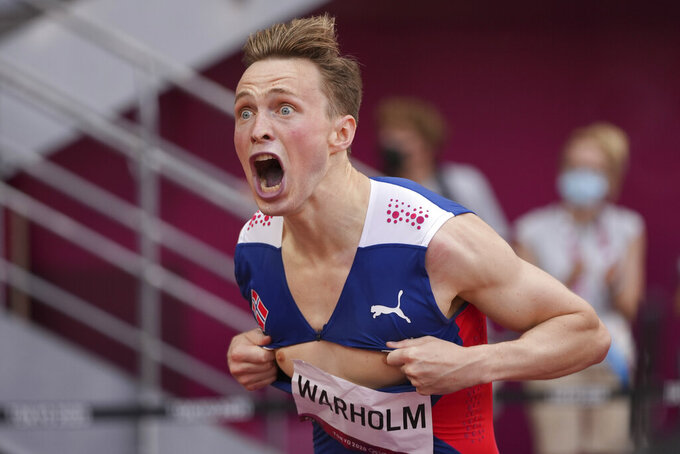 Karsten Warholm, of Norway, celebrates after winning the gold medal in the men's 400-meter hurdles at the 2020 Summer Olympics, Tuesday, Aug. 3, 2021, in Tokyo.(AP Photo/David J. Phillip)

TOKYO (AP) — The young Norwegian kid once joined a 200-meter-ish race on the spur of the moment wearing nothing but jeans and a baggy T-shirt.

He won. It shouldn't have been a surprise.

The kid's name? Karsten Warholm. That race? It started him down a road that led him first to dabble in the decathlon, then get serious about the 400-meter hurdles.

Wise choice. The 25-year-old Warholm lowered his world record with an eye-catching time of 45.94 seconds to win the Olympic gold medal on Tuesday.

The sometimes brash, always quick with a quip Warholm surprised even himself after seeing his time pop up at Tokyo's Olympic Stadium. He needed every ounce of energy he expended, too, to hold off Rai Benjamin. The American finished in what would've been a world record time of 46.17 for the silver medal. Alison dos Santos of Brazil was third in 46.72.

"I’ve always said that the perfect race doesn’t exist,” Warholm said. “But this is the closest I think I’ve come to a perfect race.”

Some things to know about the new Olympic champion:

It added another layer of intrigue to the Olympic 400-meter hurdles. The race was highly anticipated at the Tokyo Games — and didn't disappoint.

“That was the best race in Olympic history,” Benjamin said. "The kid’s amazing. You can’t be mad at that at all. As a competitor it hurts a lot, but that’s just the nature of the sport.”

On Wednesday, there's another must-see 400 hurdles race — the women's version. Sydney McLaughlin and Dalilah Muhammad could provide a show that's just as entertaining. McLaughlin is the current record holder.

Warholm was hardly a household name when he went to London in 2017 for world championships. But after he won that race for the first of his two world titles, he turned himself into a meme of sorts.

His incredulous look as he crossed the finish line went viral on parts of social media. He drew comparisons with Edvard Munch's “The Scream” painting. Munch is also Norwegian.

He had a similar look after his performance in Tokyo, which some dubbed “The Scream, Part II.”

His focus initially was on the octathlon (eight events) and then the decathlon. In 2015, he moved to Oslo to train with coach Leif Olav Alnes. They’ve been close partners in getting him on track for medals and world records.

His coach was the one who always thought breaking the 46-second plateau was possible, too.

Said British Virgin Islands hurdler Kyron McMaster on the world record: "Being around Warholm for the last three or four years, it was in the coming. I was like, ‘Yo, man, the way you’ve been progressing, that was in the horizon.’ It wasn’t far from him. Could be far from me. Could be far for anybody else. But that was well within eye sight of him.”

Told that Benjamin said he made a slight mistake in the race or could’ve run faster, Warholm quipped: “If that mistake cost him the gold medal, he shouldn’t have done it in the Olympics.”

He also felt bad for Benjamin.

“He’s going to get silver on a time that would deserve gold,” Warholm said. “It’s just a new era. It’s the 400-meter hurdles renaissance.”