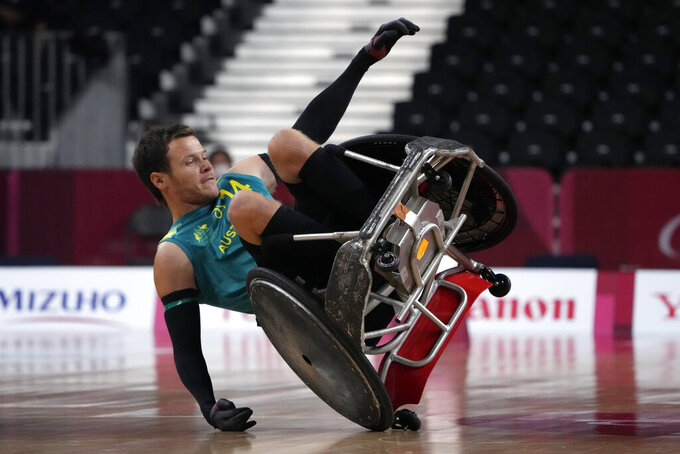 TOKYO (AP) — American captain Joe Delagrave was asked to explain wheelchair rugby. He knew he wasn't being politically correct about it — he didn't want to be — after the United States defeated Australia 49-42 to reach Sunday's gold-medal final of the Paralympics against Britain.

Anyone who has seen the famous 2005 documentary film “Murderball” knows about the sport: constant mayhem that distracts from the fact that these athletes have spinal cord injuries, they're missing arms and legs, and they're strapped into wheelchairs that resemble battered bumper cars.

“It literally smashes stereotypes,” Delagrave said. “I always joke that it’s like crippled people smashing into each other and trying to make each other more crippled. I know that's not PC, or whatever."

Delagrave broke his neck 17 years ago in a boating accident on the Mississippi River. The boat he was in struck the river bottom, he said. He was flipped over backward, hitting his head and breaking his neck.

“The beautiful thing about this sport it that it’s rehabilitative,” Delagrave said. "You bring someone new into this sport who broke their neck or had an amputation. Through the sports it changes their life to be able to be husbands, wives — whatever that title is in their life.”

The victory was sweet for the Americans over the two-time defending Paralympic champions. Five years ago in Rio de Janeiro, Australia defeated the United States 59-58 in two overtimes in the gold medal game.

Britain defeated host nation Japan 55-49 in the other semifinal on Saturday at Yoyogi National Stadium, the architectural jewel of the 1964 Tokyo Olympics and the swimming venue where United States swimmer Don Schollander won four gold medals.

The rules of wheelchair rugby are basic, the pace is quick, and there's not much stoppage playing on the basketball-size court. Chairs are frequently flipped over with strapped-in players left looking up at their spinning wheels; or worse, with the chair on top of them.

A foul earns a player time in the “sin bin,” leaving the opposition to play with a man advantage. The constant action makes it easy to forget the protagonists have disabilities.

Like many players, Delagrave credits “Murderball” with raising awareness about sports and disabilities.

“That movie, while brash at times, really helped change minds about Paralympic sports,” he said. “We're a bunch or guys or girls with disabilities but we’re athletes first — athletes first, disabilities second. We come to play hard just like anyone else.”

Delagrave is described as the “heart and soul” of the team, and it's Chuck Aoki who is probably the star. He scored 27 tries against Australia, topping the 25 by Australia's Ryley Batt. Tries are each worth one point.

Ditto for Aoki and “Murderball.”

Aoki said he was born with a rare genetic condition that doesn't leave him with any sensation of feeling in his arms or legs.

“A lot of people with disabilities get told not to do things — they can’t to this, they can’t do that. I think the sport just gives people back that sense of a competitive edge and you feel alive doing it. There’s nothing like it.”

Aoki is working on a Ph.D. in international relations and comparative politics at the University of Denver. His dissertation deals with the intersection of technology and democracy.

And now the toughest question of all: when will he finish his thesis?

“Well good question,” he replied. “After this at some point.”