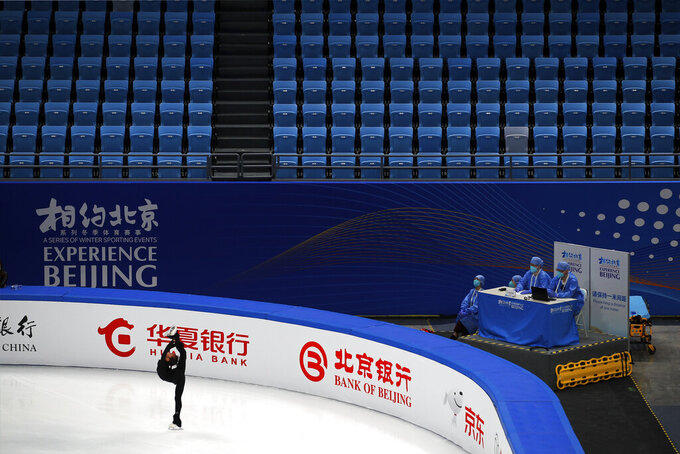 Medical workers wearing face masks and protective gears watch a Chinese figure skater perform her routine at the Capital Indoor Stadium during a test event for the 2022 Beijing Winter Olympics in Beijing, Friday, April 2, 2021. The organizers of the 2022 Beijing Winter Olympics has started 10 days of testing for several sport events in five different indoor venues from April 1-10, becomes the first city to hold both the Winter and Summer Olympics. (AP Photo/Andy Wong)

LAUSANNE, Switzerland (AP) — The World University Games that were due to open in China in just over four months have been postponed until next year, the governing body the FISU said on Friday.

The Switzerland-based FISU said COVID-19 and travel restrictions prompted the postponement, adding the decision was made jointly with officials in China.

The multi-sport event, which features about 8,000 athletes, was to have opened in Chengdu in western China on Aug. 18, just days after the closing of the Tokyo Olympics. A rescheduled date has not been announced.

The country has two other large multi-sport events coming up. The Winter Olympics open on Feb. 4, 2022 in Beijing, and the Asian Games, which feature more sports than the Olympics, are set for Hangzhou from Sept. 10, 2022.

China has become the go-to nation for many of these mega-events because it pays the costs, builds venues quickly, and does not need voter approval, which is common in many European countries.