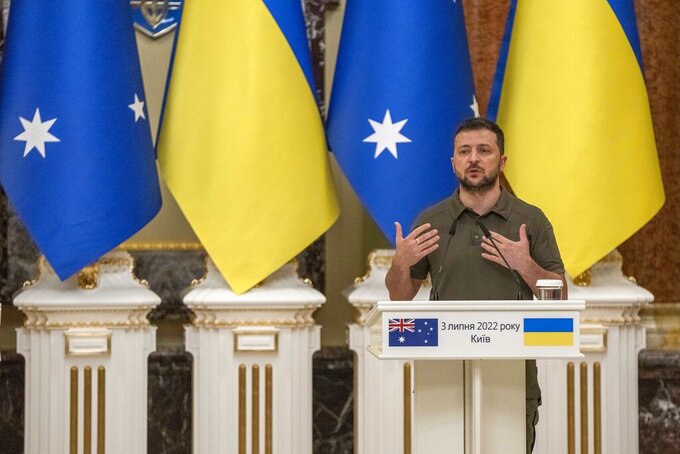 KYIV, Ukraine (AP) — Ukrainian President Volodymyr Zelenskyy has thanked the IOC for supporting a ban on Russian teams and athletes competing in most Olympics sports, ahead of a court hearing Tuesday to challenge the ruling in international soccer.

Zelenskyy met in Kyiv on Sunday with International Olympic Committee president Thomas Bach and praised “his unwavering position” on sports sanctions against Russia and its ally Belarus, according to a readout of the visit provided by his presidential office.

“While Russia is trying to destroy the Ukrainian people and conquer other European countries, its representatives have no place in the world’s sports community,” Zelenskyy said.

The IOC advised sports leaders on Feb. 28 to act and soccer bodies FIFA and UEFA made a joint ruling later that day. It is the subject of an appeal Tuesday by the Russian soccer federation at the Court of Arbitration for Sport in the Olympic home city of Lausanne, Switzerland.

Russian teams have been removed from more than 15 soccer competitions including qualifying games for the men’s and women’s World Cups, and the women’s European Championship finals tournament which starts Wednesday in England.

Bach has consistently said sports sanctions on Russia, including as an events host, are to protect the integrity of competitions and the security of athletes rather than to punish on the basis of nationality.

Zelenskyy’s office detailed the toll on Ukrainian sport during the Russian invasion now in a fifth month.

A total of 89 athletes and coaches have died “as a result of hostilities,” 13 more have been captured by the Russians, and “more than a hundred thousand Ukrainian athletes do not have the opportunity of training,” Zelenskyy said.

The IOC said it has now tripled its fund for Ukrainian sport to $7.5 million since the war started.

Bach told Zelenskyy he hoped for “a strong, successful, proud Ukrainian national Olympic team” to compete at the 2024 Summer Games in Paris and the 2026 Winter Games in Milan-Cortina d’Ampezzo, Italy.

“We want to support you to make your Olympic dreams come true,” the IOC said its leader told Ukrainian athletes Sunday when visiting their training center.