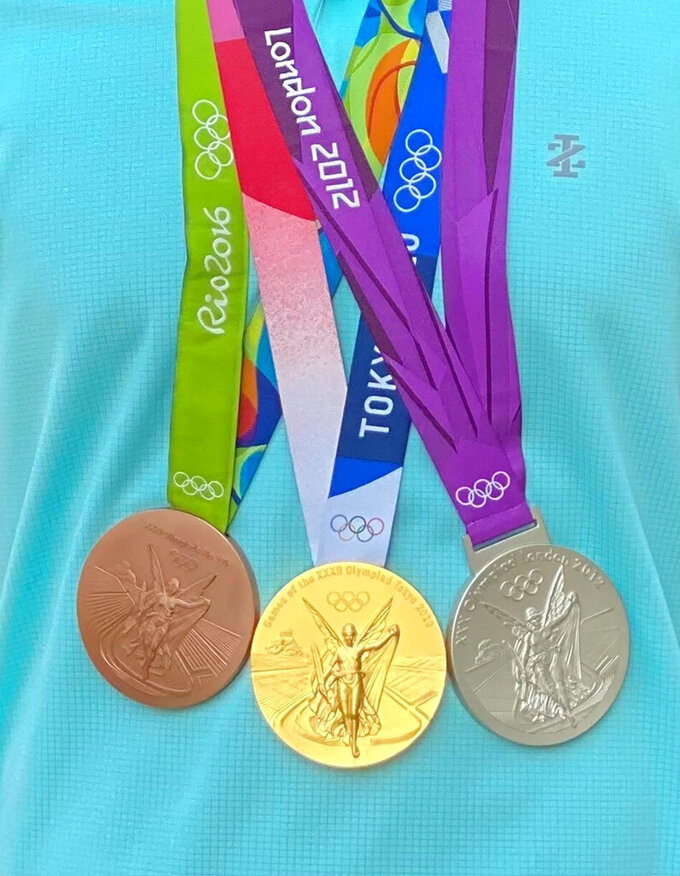 This photo provided by the Orange County Sheriff’s Department in California shows three Olympic Games medals stolen during the course of a home burglary in Laguna Hills, Calif. On Thursday, Nov. 10, 2022, authorities said they were seeking the public's help and are looking for the medals belonging to a member of the U.S. women's volleyball team. (Courtesy of Orange County Sheriff’s Department via AP)

LAGUNA HILLS, Calif. (AP) — Authorities on Thursday were looking for three Olympic medals belonging to a member of the U.S. women's volleyball team after they were stolen from a Southern California home.

The medals were being temporarily stored at a Laguna Hills home and were inside a safe that was taken in an Oct. 29 burglary, Orange County Sheriff's Department said.

No arrests have been made.

The gold medal was from the 2020 Tokyo Olympics, the silver from the 2012 London Olympics and the bronze from the 2016 games in Brazil.

Authorities didn't immediately identify the owner of the medals.

It's the second time this year that a medal belonging to a member of the women's volleyball team has been stolen in Orange County.

Jordyn Poulter reported her 2020 gold medal stolen May 25 after her car was broken into at a parking garage in Anaheim, police said.

Detectives later arrested a suspect in the theft, but weren’t immediately able to locate the missing medal. It was finally returned in June after the owners of an Anaheim barbershop reported finding the medal inside a plastic bag discarded outside their business and turned it over to police.

A 31-year-old Anaheim resident described by police as having a lengthy criminal history has been charged in the theft.