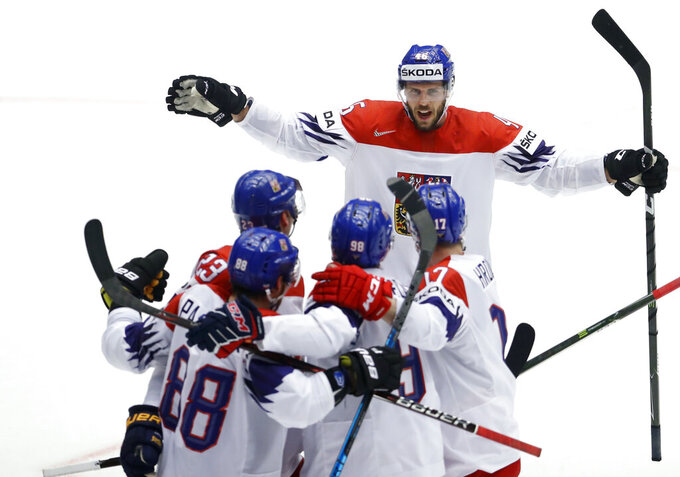 FILE- Czech Republic's David Krejci, back, and teammates celebrate a goal during the Ice Hockey World Championships quarterfinal match between the United States and Czech Republic at the Jyske Bank Boxen arena in Herning, Denmark, Thursday, May 17, 2018. On Friday Jan. 21, 2022, the Czech Republic's ice hockey team's coach Filip Pesan told reporters six of the 12 players who came from Russia's based KHL tested positive for the coronavirus ahead of the Beijing Olympics. (AP Photo/Petr David Josek, File)

The six players, all unnamed, are among a group of 12 that came from the Russia-based KHL.

“It’s a complicated situation and it’s changing every hour,” Pešán said, adding none of the positive players had any symptoms.

Those who tested negative will stay in a bubble in a hotel near the team's training facility in Prague while the positive individuals will isolate at home and join the team later, depending on negative tests.

The Czechs have named a preliminary 24-man squad for the Beijing Olympics. Anticipating possible positive coronavirus tests, Pešán has 30 substitutes available to step in.

Former Boston Bruins center David Krejci will lead the hockey team in Beijing, where the NHL won’t participate. The 35-year-old Krejci left Boston in July after 14 NHL seasons to continue his career at home in the Czech Republic.

The first part of the team is set to fly to Beijing on Thursday.