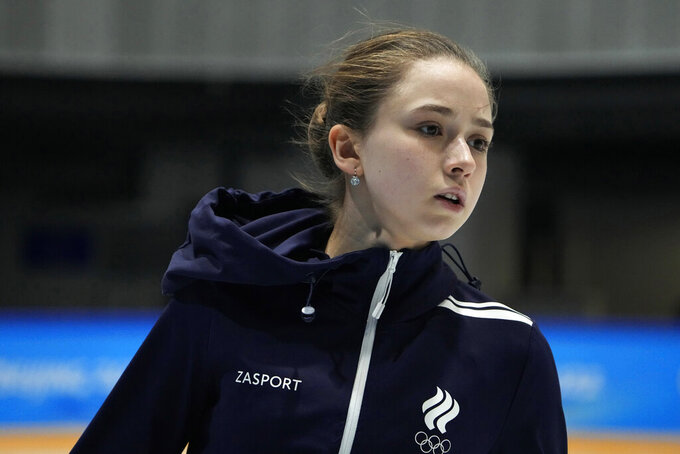 BEIJING (AP) — One of the most anticipated events at the Beijing Olympics is the imminent legal hearing in Russian figure skater Kamila Valieva’s doping case.

At stake is Russia’s gold medal in the team event and the 15-year-old star’s right to compete in the women’s individual event starting Tuesday.

Court of Arbitration for Sport judges will decide if an interim ban — imposed on Tuesday by the Russian anti-doping agency and lifted on appeal one day later by the same organization — must be re-enforced to remove Valieva from the Olympics.

The venue will be a ground-floor conference room at the Continental Grand Hotel in Beijing, within sight of the Bird’s Nest stadium.

Lawyers for an alphabet soup of sports bodies will be in the room or connecting by video link from around the world. The complex system is difficult to understand. Here's a list of some of the agencies and what they do.

CAS – Court of Arbitration for Sport

The highest court in the Olympic sports world based in the International Olympic Committee's home city of Lausanne, Switzerland. The IOC started CAS in 1984 to give independent and consistent rulings in disputes and appeals for sports organizations who recognize the court's authority. Most American sports pro leagues and college sports are outside the system.

For major events such as the Olympics, CAS sets up temporary courts in host cities. A panel of three judges will hear the Valieva case. CAS has nine judges in Beijing available for Olympic duty.

CAS is often criticized by athlete groups who say the system is weighted in favor of institutions over athletes. Rulings can be challenged on procedural grounds at Switzerland’s supreme court.

Sports bodies, including the IOC, funded half of CAS revenue — about 18 million Swiss francs ($19.4 million) — in 2020. The other half comes from fees paid by parties involved in cases.

Before he became IOC president in 2013, Thomas Bach was chairman of the CAS appeals division for 19 years.

Like all sports nations, Russia has an anti-doping agency that handles testing and collecting samples of athletes. RUSADA is trying to rebuild credibility after the years-long Russian doping scandal that began at the Sochi Games in 2014.

RUSADA is under special scrutiny from the World Anti-Doping Agency (WADA) as part of the slate of punishments against Russia. RUSADA should regain full status when the two-year punishment expires in December.

RUSADA provisionally banned Valieva, who appealed. A RUSADA disciplinary panel overturned the ban Wednesday. That procedural decision is now being challenged in CAS.

CAS is only ruling on the provisional ban. A separate process will handle the full case, and that could take months.

The mothership of the Olympics, the IOC delegates responsibility to sports bodies and quasi-independent agencies that it helps fund from broadcasting and sponsorship income. The IOC earned $4.2 billion last year.

The IOC retains ultimate control of its Games with Article 58 of the Olympic Charter stating: “The authority of last resort on any question concerning the Olympic Games rests with the IOC.”

The IOC appoints the International Testing Agency in Lausanne to design and manage an anti-doping program for each Olympics.

The IOC has declined to comment directly on details of the Valieva case, through instructed the International Testing Agency to file the appeal to CAS on its behalf.

Formed by the IOC in 2018 because of the Russian scandal. The ITA aims to bring more consistency to testing athletes and help avoid conflicts of interest or suspected protection of star athletes by national agencies.

The IOC appointed a former French sports minister, Valérie Fourneyron, to chair the agency, which gets 3.5 million Swiss francs ($3.8 million) annually from the Olympic movement.

The work can continues for up to 10 years after a competition. The agency can decide when to reanalyze stored samples and can reopen cases as new testing methods are developed.

The Montreal-based agency manages the anti-doping rule book and list of prohibited substances. It also funds research into new methods of sample collection and testing.

WADA was created in 1999 to harmonize anti-doping with equal funding from sports and governments, who take turns getting the presidency. Current leader Witold Banka, a former 400-meter runner, was sports minister in Poland when picked in 2019.

The IOC and Olympic movement contributed $18 million toward WADA’s income of $37.4 million in 2020. Russia’s contribution was $1 million last year.

WADA monitors how doping cases are handled worldwide and can file appeals at CAS against verdicts it sees as too harsh or lenient. That includes RUSADA's decision to lift Valieva’s provisional ban.

One of the sports governing bodies which set rules of their games, appoint officials and organize events at the Olympics.

The ISU said Friday it would join with the IOC’s appeal in the Valieva case.