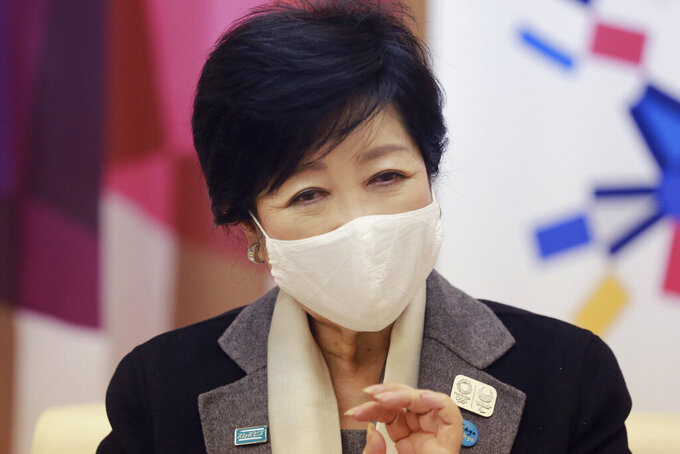 Tokyo Gov. Yuriko Koike speaks during an interview with The Associated Press in Tokyo, Monday, Dec. 14, 2020. The growing availability of coronavirus vaccines is a “ray of hope” for hosting the Olympics next summer, Koike said Monday as Japan struggles with a new surge in infections. (AP Photo/Koji Sasahara)

TOKYO (AP) — The growing availability of coronavirus vaccines is a “ray of hope” for hosting the Olympics next summer, Tokyo Gov. Yuriko Koike said Monday as Japan struggles with a new surge in infections.

As host city, Tokyo will do “whatever it takes” to successfully achieve the games, which were postponed for a year until next July because of the pandemic, Koike said in an interview with The Associated Press.

“A few vaccines are now being distributed and are actually being used. It's a ray of hope," she said, citing the beginning of vaccinations last week in Britain and the distribution of vaccines starting this week in the United States.

“I expect this will also become a ray of hope for the Olympics and Paralympics," Koike said.

Japan's government has said it will secure enough vaccines to cover all citizens by next June.

Even without a mandatory lockdown, Japan survived earlier coronavirus surges better than the U.S. and most countries in Europe. It issued non-binding stay-home and non-essential business closure requests in April and May and still managed to slow the pace of infections.

During a second surge during the summer, Tokyo asked businesses to close early and urged residents to wear masks and follow other basic preventive measures.

“Japanese people are very cooperative, but by now they are getting complacent about the situation after repeated similar requests,” Koike said. “I’m worried.”

Japan has reported 179,653 cases nationwide, including 2,585 deaths, as of Sunday. Tokyo, where the daily tally exceeded 600 last week, reported 305 new cases on Monday.

Koike said it is the central government’s responsibility to protect citizens’ health and safety, but there is a perception gap between it and the Tokyo government. “So I do all I can to protect the health and lives of the residents in Tokyo,” she said.

Prime Minister Yoshihide Suga's government has pushed a discount travel campaign to support the tourism industry, ignoring warnings from experts that economic and social activity should be scaled down. On Monday, Suga finally announced a decision to halt the GoTo tourism campaign nationwide from Dec. 28 to Jan. 11 during the holiday travel season.

Suga also announced plans to compensate bars that cooperate with early-closure requests and provide special allowances for medical workers for their contribution to the fight against the coronavirus.

Recent media surveys show the public support rating for Suga's government has plunged to about 50% from about 70% in the three months since he took office, with many respondents citing concerns about his handling of the coronavirus.