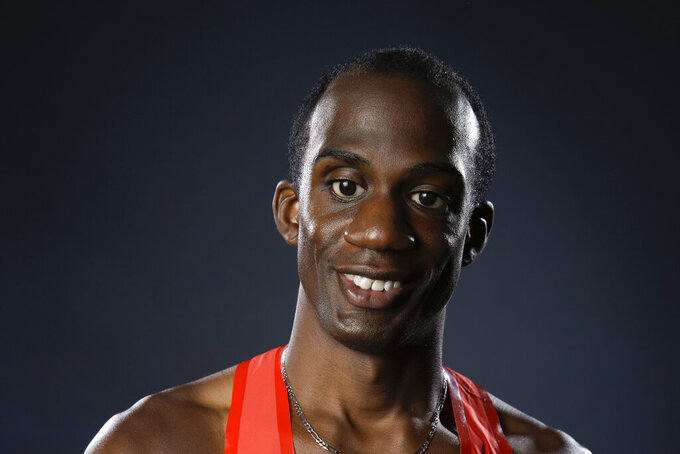 The popular black-and-gray T-shirt featuring the mantra of blind long jumper Lex Gillette currently remains sold out on his website.

Just temporarily, though. After the Paralympic Games in Tokyo, the 36-year-old from North Carolina vowed to make a new batch with his trademark slogan emblazoned across the front: “No need for sight when you have a vision."

Maybe even in a new color option — gold.

Because that's one color he’s definitely envisioning. In four previous trips to the Paralympics, he’s taken home a silver medal each time.

“Basically the only box I haven’t checked yet,” said Gillette, who competes Friday in Japan. “So it would definitely mean a lot (to win)."

On the eve of his fifth Paralympics appearance, Gillette took a moment to reflect: On being blind by around 10 years old. On discovering the long jump through a gym class. On traveling the world thanks to track. On winning numerous awards. On setting the world record in the visually impaired classification of his signature event.

“I've been able to do a lot of awesome things," he said.

Recurrent retinal detachments. That's how his blurriness at 8 was explained. Just random, too. No trauma. No sickness. No accident.

He went through 10 operations in an effort to save his vision. After the final one, the doctors broke the news: His sight wasn't going to be saved.

It was almost by coincidence he discovered track. He went to school with sighted kids and one of the activities in a gym class happened to be the standing long jump. He took his first leap and had no idea how far he jumped.

This should've been clue No. 1 it was far: The cheers of his classmates.

“The place was literally going bonkers,” Gillette recalled. “I just jumped through the roof.”

One of his teachers, Brian Whitmer, took him to the track and taught him the mechanics of the long jump. He also planted a thought in his mind — the Paralympics.

“He was like, ‘You could travel the world. You can break records. You can win medals,'” said Gillette, who's sang the national anthem at various events, including a San Diego Padres game. “He helped me to see my potential.”

A potential that's included setting the world mark in the T11 category with a leap of 6.73 meters (22 feet, 1 inch). He's earned medals upon medals, including silver at the 2004 Paralympic Games, silver again four years later in Beijing, silver once again in London and silver for a fourth time in Rio de Janeiro.

That runner-up finish in Rio, though, stuck with him because he was in gold-medal shape. But he struggled to hear the clapping of his guide/coach/friend Wesley Williams down the runway over the crowd noise.

That won't be a factor in Tokyo, where there are no fans due to the coronavirus pandemic. Still, he and Williams developed a 15-stride approach so that Gillette would be a little closer.

They've been a team for the last 14 years. They train together five times a week just to be on the same page for a competition.

This is how it works: Before a jump, Williams walks with Gillette to the starting point. Then, Williams heads back near the sand pit and waits. Once Gillette takes off down the runway, Williams claps to guide him along, screaming “fly, fly, fly, fly,” as Gillette approaches the takeoff point to let him know he’s on the right path. He’ll also holler “stop” if Gillette veers off course.

Gillette knows immediately if it’s a good leap, too, simply by walking to the back of the pit.

“If it only takes a stride to get to the back of the pit, you have an idea, ‘All right, I think that this was something good,’” said Gillette, who trains at the Elite Athlete Training Center in Chula Vista, California.

Williams has become a little bit of everything to Gillette — teammate, coach and friend. Gillette's success is his success, even if Williams hasn't received a Paralympic medal as a long-jump caller.

“I got into this game understanding the role and we didn’t start out getting medals. Lex and I have went on to win a ton of competitions and I feel just as awarded as he does!” Williams wrote in an email. "We are aiming to let the powers that be know that it’s just not what you see at championships in regards to the guides. We are literally apart of the process from beginning to end, putting in the sweat equity and fitness standards to propel the athlete/s to personal bests, world records, and the medal stand!”

Added Gillette: “I would love for Wesley to be able to look back on a medal and say, ‘Hey, we did this together.' Because as it stands right now, he only has the memories — and memories are fantastic, but to accompany those memories with a medal, that would be amazing.”

Away from the track, Gillette’s a diehard Carolina Panthers fan. He listens to the broadcasts and then postgame shows ( Christian McCaffrey even sent him a jersey, with the message, “Keep inspiring!” written on the back). Gillette also knows the different voices, which is why he instantly recognized the caller who dialed him just before the U.S. Paralympic trials to wish him luck — former Panthers coach Ron Rivera (now with Washington).

“That was some really great motivation for me," Gillette said. "That might be some of the wings that I need to fly to the gold in Tokyo.”

About his mantra — “No need for sight when you have a vision” — Gillette came up with it in 2008 simply as a way to inspire.

“It was a perfect illustration of what I believed my life to be,” Gillette explained. “It doesn’t matter if I have eyesight, I just have to see something greater, see something bigger, and then do everything in my power to bring that into reality.”