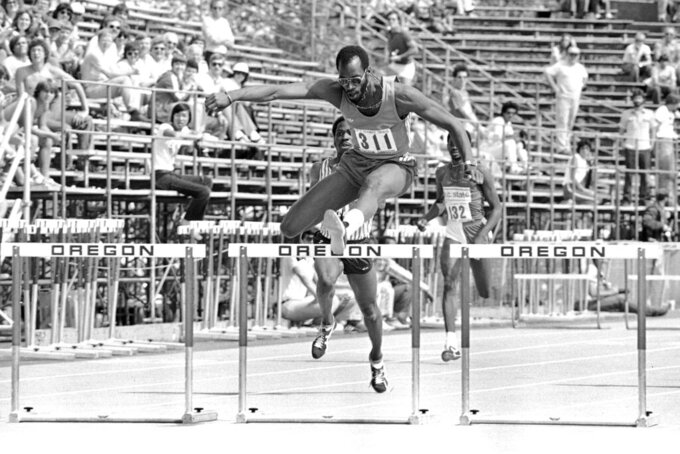 FILE - In this June 21, 1980, file photo, Edwin Moses, gold medal winner in 1976 in Montreal, coasts to an easy victory in the 400 intermediate hurdles as the 1980 Olympic trials in Eugene, Ore,. While the fact that Moses was denied a chance at a medal in 1980 is only a footnote to his career, he has spent the last several months organizing reunions for the 1980 team. (AP Photo/File) 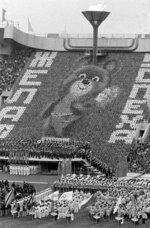 COLORADO SPRINGS, Colo. (AP) — Many of the names are familiar. Others don't quite ring a bell.

There were 474 U.S. athletes primed to take their talents to the Moscow Olympics in 1980. The U.S. government, in the throes of a Cold War struggle with the Soviet Union, put an end to those plans. Of those 474 athletes, 227 would never get another chance at Olympic glory.

All the athletes' names, and their story, are enshrined at the recently opened U.S. Olympic and Paralympic Museum — a small, overdue and fittingly timed tribute to a group of athletes who never got their due.

“If you get your shot and you don't win, then you don't win,” said swimmer John Moffet, who was 16 at the time the boycott was announced. “One thing that made this so hard was that we didn't get our shot in 1980, and it was nothing that we did.”

Moffet did get his shot four years later at the Los Angeles Olympics. He came into those games as the world record holder in the 100 meter breaststroke. He tore a muscle in his leg during preliminaries, which cost him a realistic chance at a medal that many thought he would win. A painful day, indeed, he said, but nowhere near what some of his U.S. teammates endured.

There were dozens upon dozens — among them, wrestler Lee Kemp, high jumper Benn Fields and water polo player Peter Schnugg, whose stories will be told as part of The Associated Press' series on the boycott — who had had 1980 circled on their calendar for years, only to see it ripped away. They never got another chance.

The Carter administration tried to make it up to the athletes. They were honored at the White House and given Congressional gold medals — the highest honor a civilian can receive from Congress — though even that came with a caveat. Because the medals were not pure gold — they were gold-plated bronze — it took 27 years and a big push from some of the athletes themselves before they were officially recorded in the Congressional Record.

Time passed and the athletes moved on with their lives.

Some, such as rower Anita DeFrantz, turned the Olympics into a career. DeFrantz, now a Vice President of the International Olympic Committee, dedicated a lot of her time to ensuring more recognition for the 1980 team.

“We were viewed as kids who didn't know any better,” DeFrantz said on a video call earlier this year held to commemorate the 1980 team. “And we asked, ‘Can one life be saved by doing this?’ They said ‘No’ and that just did it for me.”

Edwin Moses won 122 straight races in the 400 meter hurdles between 1977 and 1987. He has two Olympic gold medals and one bronze. And while the fact that he was denied a chance at a medal in 1980 stands as a mere footnote to his career, he has spent the last several months organizing reunions for the 1980 team — a mission made all the more vital because Olympians this year are not competing, also due to issues completely out of their control.

“It's a chance to pay forward our experiences, a chance to use the tragic legacy of 1980 to show the true power of sport,” Moses said.

Forty years after the boycott, the U.S. Olympic and Paralympic Museum pushed hard to include a permanent 1980 exhibit — the first of its kind.

“You can't blame people for not remembering the 1980 team, because nothing happened, other than that we didn't go,” said Moffet, who helped with the planning of the exhibit.

Like most sports, USA Swimming held an Olympic trials a few months after the U.S. Olympic Committee made the fateful decision, on April 12, 1980, to go along with the government's plan and boycott the Olympics. American swimmers competed on the same days the swimmers in Moscow were in the water at the Olympics. Times from the Olympics were flashed on the scoreboard to see if America's best might have really won a medal that day.

But Moffet's most visceral memory from 1980 came on that day in April, hours after the USOC decision to boycott. With no races on his schedule that night, he sat in the stands to watch a meet that had been designed as a tune-up for Olympic trials, which, only hours earlier, had been expected to mean much more.

Before the swimming began, the national anthem played.

“My dad turned to me and said, ‘Sounds different, doesn’t it?'” Moffet said. “I wasn't a very cynical kid, but I remember thinking to myself — ‘Yeah, it really does.’”