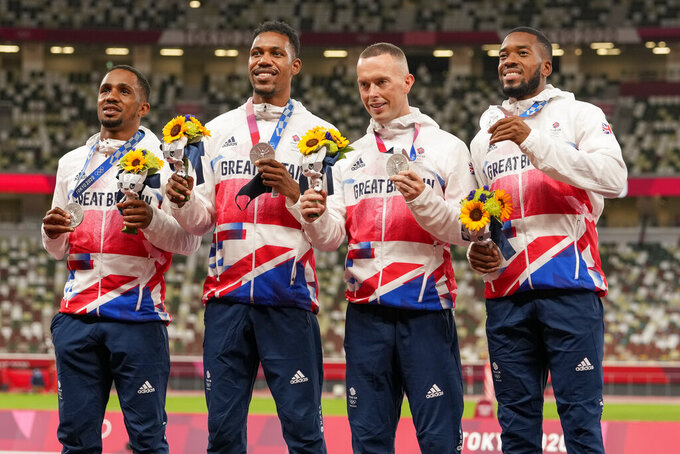 FILE - Silver medalist, team Britain, from left, Chijindu Ujah, Zharnel Hughes, Richard Kilty and Nethaneel Mitchell-Blake pose, during the medal ceremony for the men's 4 x 100-meter relay at the 2020 Summer Olympics, Saturday, Aug. 7, 2021, in Tokyo. Britain's 4x100-meter relay team has been stripped of its silver medal from the Tokyo Olympics after C.J. Ujah’s doping violation was confirmed by the Court of Arbitration for Sport. Ujah’s sample taken in Japan in August, 2021, contained the prohibited substances ostarine and S-23, which are selective androgen receptor modulators (SARM) and help with building muscle. Ujah did not challenge the anti-doping rule violation, but CAS said he claimed to have not knowingly or intentionally doped and that “the source of the prohibited substances could have been the ingestion of a contaminated supplement." (AP Photo/Martin Meissner, File)

LONDON (AP) — In one of Britain's biggest Olympic doping scandals, the 4x100-meter relay team was stripped of its silver medal from Tokyo after C.J. Ujah's doping violation was confirmed by the Court of Arbitration for Sport on Friday.

Ujah was part of the quartet alongside Zharnel Hughes, Richard Kilty and Nethaneel Mitchell-Blake that finished second to Italy in a close race by 0.01 seconds in August. But a sample taken from Ujah after the race in the Japanese capital was found to contain the prohibited substances ostarine and S-23, which are muscle-building selective androgen receptor modulators.

Canada will be upgraded to silver with China taking bronze.

Ujah did not challenge the anti-doping rule violation but his claim to have unknowingly consumed a contaminated supplement was not accepted. Now the suspended Ujah is waiting for a ruling about a ban from the Athletics Integrity Unit.

“I would like to apologize to my teammates, their families and support teams for the impact which this has had on them," Ujah said in a statement. “I’m sorry that this situation has cost my teammates the medals they worked so hard and so long for, and which they richly deserved. That is something I will regret for the rest of my life.”

Britain has only twice previously been stripped of Olympic medals — both bronze. Judoka Kerrith Brown produced a positive for a diuretic at the 1988 Seoul Games — after claiming to be unaware the substance was prohibited — and a banned stimulant methamphetamine was detected in skier Alain Baxter's sample at the 2002 Salt Lake City Winter Games after he used a nasal inhaler.

The British Olympic Association made no attempt to defend Ujah's actions.

“We welcome his contrition. That said, this should act as a salutary message for anyone — British or otherwise — who is doping or considering doping as a way of boosting their athletic performance," the BOA said in a statement. "You will get caught. You are not welcome on our team and nor are you representative of our values, or of our nation.”

Tokyo was Britain's second-most successful overseas Olympics after the 2016 Rio de Janeiro Games. Losing a medal prevented Britain from matching the 65-medal haul of the home games in London in 2012.

“All athletes, wherever they are from, deserve to go to the start line knowing they are in clean competition,” the BOA said. “It is with deep sorrow that colleagues and opponents of Ujah were not able to be reassured of this fact in Tokyo."