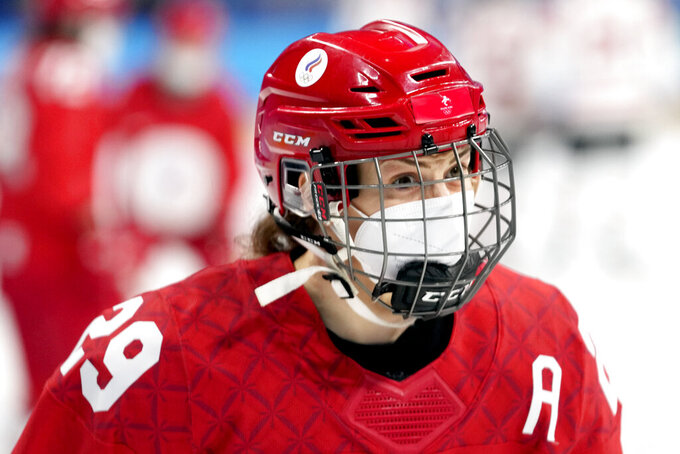 Russian Olympic Committee's Alexandra Vafina wears a COVID mask under her hockey mask as she warms up for a preliminary round women's hockey game against Canada at the 2022 Winter Olympics, Monday, Feb. 7, 2022, in Beijing. (AP Photo/Petr David Josek)

“Against Canada with the mask on? It was an experience," she said following a 6-1 loss in a Group A preliminary round matchup, which became the first Olympic women’s hockey game to require all players to wear masks.

“It’s not enough oxygen," Vafina said. “So for us in the first period was pretty hard, but we adjusted to that.”

COVID-19, which has the Beijing Games' participants limited to living and competing inside a tightly controlled bubble environment, nearly derailed the on-ice action Monday.

Forward Oxana Bratisheva, speaking through a team interpreter, said Russian Olympic Committee players were initially told the game against Canada was being postponed, before it was decided to push back the opening faceoff by 65 minutes.

At issue was that the Russian COVID-19 testing results from earlier in the day were not yet available by game time. After both teams took part in the pregame warmup, the Canadians stayed in the locker room awaiting the ROC results.

Adding to Canada’s concerns were that Russian players were testing positive before and after the team’s 5-0 loss to the United States on Saturday.

The International Ice Hockey Federation reached a compromise, getting both teams to agree to wear masks. The Russians eventually took off theirs for the start of the third period after the tests revealed no additional positive results, while the Canadians finished with masks on.

“We figured we’ve already done it for two periods,” forward Natalie Spooner said. “Why not just keep being extra safe for one more period and make it through.”

In other games, Denmark defeated the Czech Republic 3-2, Sweden beat China 2-1 and Switzerland beat Finland 3-2. The win was Denmark’s first in its Winter Games debut, and it keeps the country's chances alive to earn a quarterfinal berth out of Group B. Japan and the Czech Republic have already secured spots out of that group.

Canada pulled forward Emily Clark from the lineup after her test result came back inconclusive.

“We’re so used to rolling with the punches,” Canadian forward Brianne Jenner said of the initial delay and the mask-wearing requirement. “We were just keeping it light. We were laughing, joking in the room, dancing. We were just ready for anything. If we’ve got to play in these again, we will.”

Canada improved to 3-0 in the final tuneup before the team closes the preliminary round against archrival United States (3-0) on Tuesday.

Sarah Nurse and Sarah Fillier scored 20 seconds apart to put the Canadians up 2-0 by the 2:29 mark of the first period in a game in which they outshot the Russians 49-12. Nurse and Rebecca Johnston had a goal and an assist each, while Marie-Philip Poulin, Erin Ambrose and Jamie Lee Rattray also scored.

Canada, which experienced a COVID-19 breakout in late December, benefited from having spent part of its four-month pre-Olympic camp practicing with masks for precautionary reasons.

“Obviously it’s not ideal, but we made it through," Spooner said. "And I think the best thing about this team is we have fun with whatever we’re doing and we made the best of it.

“We had a little laugh about it, like, this is probably a pretty cool story in the long run. You’re going to look back and be able to say, 'I was at the COVID Olympics and we even wore a mask in a game.’”

The Russian Hockey Federation released a statement saying it was in full compliance of Beijing Olympic COVID-19 rules by completing its tests at 9 a.m. What was unclear is whether the IIHF adapted its rules in requiring teams playing at 12:10 p.m. to have their tests completed by 5 a.m.

Russian defender Anna Shibanova questioned why the Canadians weren’t fined or forced to forfeit the game for staying in their locker room.

Her coach Yevgeni Bobariko, however, dismissed any talk of forfeiture.

“No, no, no. We were not considering that possibility because we respect every team that we play against, and Canada is not an exception,” Bobariko said through a team interpreter.

“We were ready to play this game whenever they said to us — 1 p.m., 2 p.m., 3 p.m. midnight,” he added. “We were going to play this game anyway. Because the outcome of the game must be decided on the ice. Not off the ice.”