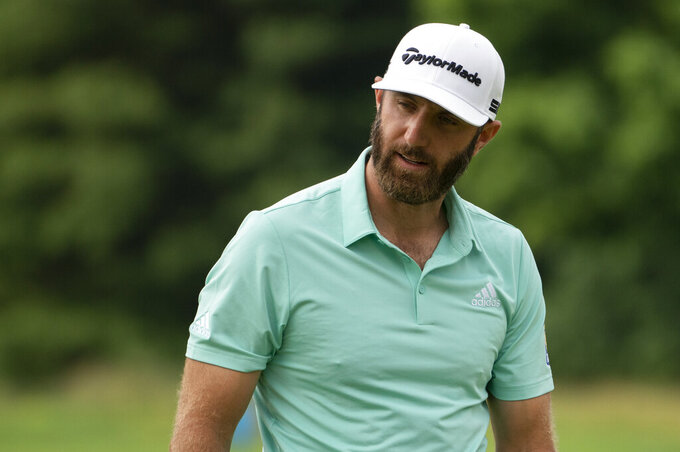 Dustin Johnson reacts to a missed put on the fourth green during the third round of the Travelers Championship golf tournament at TPC River Highlands, Saturday, June 26, 2021, in Cromwell, Conn. (AP Photo/John Minchillo)

No one really asked Cantlay for his outlook on the Olympics even as he returned to the top 10 in the world by winning the Memorial for his second victory of the PGA Tour season. That put him very much in the mix for a spot on the American team going to Japan.

The final week of qualifying was the U.S. Open. The final day provided an answer from an astute member of his team: “The decision has been made for him.”

Four other Americans were ahead of him, in the Olympic ranking and at Torrey Pines during the final round. That meant there was no room for Cantlay, the No. 7 player in the world.

So when the final Olympic ranking was released and 15 players decided not to go — from Johnson at No. 2 to Camilo Villegas of Colombia at No. 225 — it was easy to conclude the men care far more about green than gold, silver or bronze.

For Rio de Janeiro, the top four players in the world stayed home. For Tokyo, there wasn't even room for for Nos. 7, 8 and 9 — Cantlay, Brooks Koepka and Patrick Reed.

They will never catch up with the women, who have made it perfectly clear by near-perfect attendance that the Olympics mean as much to them as anything they play.

“I can't speak for what Olympics mean for a lot of people,” Danielle Kang said last week. “But for me, it's everything.”

There are differences to consider, of course, namely the tour schedules and the stakes, along with the fame the women get at the Olympics that doesn't happen at some of their majors, like the Evian Championship.

For the administrators who lobbied to get golf into the Olympics, they should be encouraged by two Olympics separated by five years and two viruses.

It was largely concern and fear about the Zika virus that kept 22 eligible players from going to the 2016 Olympics. There was an unspoken pledge they would be all in for Japan.

That was before the outbreak of the new coronavirus. The Olympics not only were postponed, but COVID-19 restrictions in place for the Games to go on have stripped away so much fun and activity involved with being Olympic athletes.

If only it were that simple.

Johnson already was planning to skip the Olympics before the pandemic. He had not won the FedEx Cup and it bothered him, so he didn't want to fly halfway around the world after a major and before a World Golf Championship and then play three consecutive weeks with a $15 million prize at stake. Turns out he won it last year, anyway.

And that's why there will be attendance issues with the men. As long as there is a pot of gold at the end of the Olympics, the value of Olympic gold will suffer.

The men's majors have a century or more of history behind them. The Olympics went a century without having golf.

Kang couldn't keep her eyes off the world ranking, hopeful she could hold down her position and earn a spot in the Olympics. For the men, the Olympics are like the Presidents Cup. No one really talks about it until the final week to make the team.

“I just think men golfers, they just have so many big events,” Inbee Park said. "They have so many opportunities and so many different weeks with so many big tournaments. For us, I think it’s a little different. We’re not as big as men’s golf.

“So I think girls just treat it a little differently,” she said. “Men trying to work it in their schedule with a lot more tournaments going on and a lot more going on is different.”

It was a big deal for Park, who delivered a true Olympic moment.

Think of the sports in which athletes trained their entire lives for a stage that comes along once every four years. Park sat out from top competition for two months to let an injury heal, even as there were whispers in South Korea that she should give up her spot to another player in the powerhouse country.

Park then whipped up on the No. 1 player in the world to win the gold medal.

It's a big deal for Sungjae Im and Siwoo Kim, who can avoid mandatory military service in South Korea by winning an Olympic medal. Not even a green jacket can do that.

For so many other men, it's more of an honor than a priority. As long as they play, there's nothing wrong with that.