Dad's club leads to bonding for US men's volleyball team 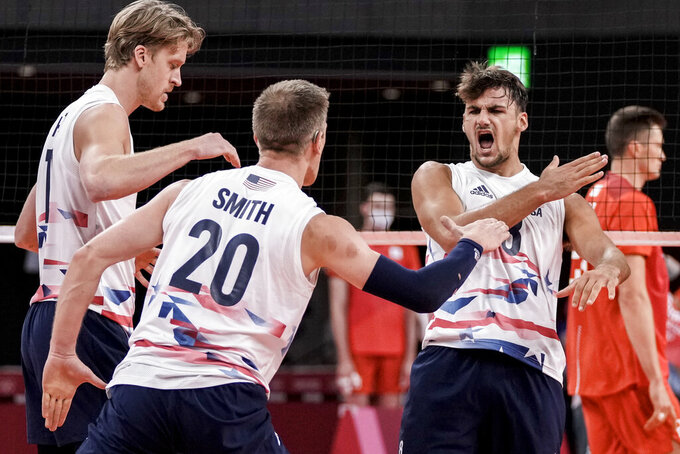 Christenson was playing a pre-Olympic tournament in Italy in June with the rest of the U.S. men's volleyball team when he hopped on a plane for a trip of about 8,000 miles to head home to Hawaii for less than 48 hours to be there for the birth of his second child.

“That was a bit chaotic,” Christenson said. “That travel was all a blur. I'm thankful my teammates and coaches supported it."

Family and fatherhood are an integral part of the U.S. team with five of the 12 players on the team being dads, including four who became fathers since the previous Olympics in Rio de Janeiro in 2016.

With families unable to travel to the pre-Olympic tournament or to Tokyo because of the coronavirus pandemic, being on the road is a bit more challenging for dads.

“The emotional attachment to home is a little bit different now because I have my wife and my son there instead of just wanting to get home,” said U.S. player Matt Anderson, who got married and became a first-time father in 2020.

“Having somebody there to go home to be around for a bit more, adds more to it, makes it a little bit more complex and more intricate."

Anderson and Christenson are part of the informal “dad's club” on the U.S. team in Tokyo.

Christenson became a first-time father in 2018 when his son Ezekiel was born and then Quinn joined the family in June. He got to spend about three weeks at home between the two tournaments with some bonding time he cherishes now that he's apart again.

Outside hitter Taylor Sander and setter Kawika Shoji also became fathers for the first time in 2018 and Shoji had a second daughter last year.

“I think it’s another of level of relationship that we can have with each other,” Anderson said. “Part of what we do so well as a team is, we bond off the court. That allows us to know everyone’s journey and know their lives and to be able to sympathize and empathize with them in certain situations. All sorts of things happen. Micah Christenson went home from Italy so he could be there for his wife and welcoming their second baby boy and then came back. None of us batted an eye because family always comes first.”

Shoji says becoming a dad since the previous Olympics gives him a “special bond” with the other fathers on the team as they commiserate over missing their families while they are away competing and trade stories about what it’s like raising young kids.

The U.S. team has spent much of the time leading up to the Olympics away from home having played in a tournament in Italy and then coming to Japan early after a short break in between trips.

Shoji said his 3-year-old Ada-Jean is starting to understand what dad does for a living, but that also comes with a cost now that she doesn’t want him to leave as well.

“That’s been really cool,” he said last month. “But it also makes it hard because she doesn’t want me to go. ... We tell her about the Olympics. She knows that there’s a volleyball thing called the Olympics and it was somehow related to the Olympic trials that she was watching at home. But she doesn’t understand it completely.”

When it comes to being an Olympic dad, the new fathers on the U.S. team can lean on middle blocker David Smith, whose oldest son was born a couple of months before his first Olympics in London in 2012. Smith had a second child since the previous Olympics with daughter Amelie joining the family in 2018.

“The travel is tough. I hate to say it, but I’ve gotten used to it, now seeing my family for only stretches of time,” Smith said. "This year is more difficult because we didn’t really have a home leg at all. We relied a lot on Facetime and video chat to keep in contact with our family. I think some of the younger kids have a hard time understanding why Dad can’t come home tonight. But it comes with the job and we learn to manage it together. A lot of credit to the wives for kind of going solo for long periods of time and supporting us along the way.”

The American men lost their pool-play match Monday in four close sets to the Russians as they squandered two set points in the second set. That dropped the U.S. to 1-1 in Pool B, while ROC is now 2-0.