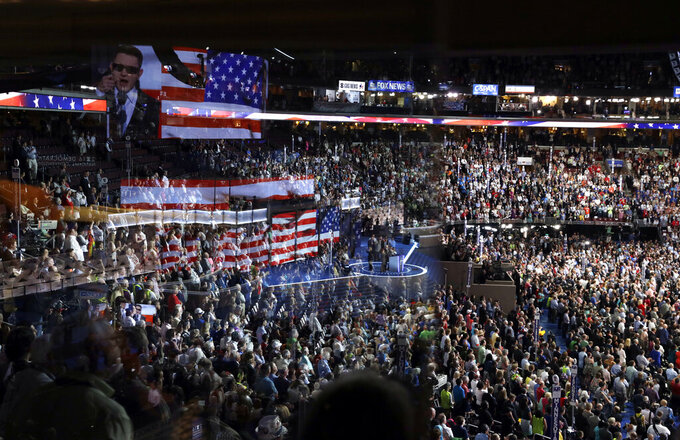 FILE - In this July 26, 2016, file photo the stage is reflected on a glass window on the suite level at Wells Fargo Arena as Timmy Kelly sings the national anthem before the start of the second day session of the Democratic National Convention in Philadelphia. The coronavirus pandemic is forcing Democrats and Republicans to take a close look at whether they'll be able to move forward as planned this summer with conventions that typically kick off the general election season. (AP Photo/John Locher, File)

Democrats announced Thursday that they were postponing their presidential nominating convention until August, an unprecedented move that shows how the coronavirus is reshaping the battle for the White House.

The party had hoped that a mid-July convention would give them more time to rally behind a nominee and unify against President Donald Trump. But concerns that large crowds will spread the virus prompted Democrats, including prospective nominee Joe Biden, to press for alternatives.

“In our current climate of uncertainty, we believe the smartest approach is to take additional time to monitor how this situation unfolds so we can best position our party for a safe and successful convention,” said Democratic convention CEO Joe Solmonese.

Milwaukee will still host the convention, which is now scheduled for the week of Aug. 17. Republicans are sticking with their plan to meet in Charlotte, North Carolina, a week later to renominate Trump.

The social distancing required to combat the coronavirus has already prompted multiple states to delay their presidential primaries from April and May into June. But the postponement of the convention is the most significant change to the presidential section process to date.

Outside circumstances have affected conventions in the past, including hurricanes that forced relatively minor scheduling changes to Republican gatherings in 2008 and 2012. Still, the major political parties have always pressed forward with their conventions, even during times of crisis as severe as the Civil War.

“Ultimately, the health and safety of our convention attendees and the people of Milwaukee is our top priority,” Democratic National Committee Chairman Tom Perez said.

Biden began suggesting this week that changes were likely. Appearing on Jimmy Fallon's late-night NBC program on Wednesday, Biden said he doubted "whether the Democratic convention is going to be able to be held” on its original July 13-16 dates.

“I think it’s going to have to move into August,” Biden said.

The announcement on Thursday didn't specify whether the convention will remain a traditional four-night affair or whether all aspects will be held in-person. There has been discussion of holding parts of the convention virtually and allowing delegates to vote by proxy.

Still, the change presents massive logistical issues for the tens of thousands of delegates, activists, party leaders and media who planned to descend on Milwaukee in July. The party said the arena slated to host the convention along with hotels in the area are still available in August.

Neither Democratic nor Republican leaders want to sacrifice the boost that can result from an enthusiastic convention gathering.

Trump thrives on big rallies and has missed that part of his routine amid the coronavirus outbreak, reluctantly turning the Rose Garden and the White House briefing room into substitutes. A traditional convention, with a nationally televised nomination acceptance speech, could be even more critical for Biden, who has been relegated recently to remote television interviews from his Delaware home, unable to draw the kind of spotlight that a sitting president commands.

Biden has a commanding delegate lead, but Vermont Sen. Bernie Sanders remains in the race and could keep the former vice president from winning the nomination until late June. That requires Perez to tread gingerly around any discussions that party leaders have with Biden or his advisers — especially given the skepticism among Sanders' supporters of the party establishment.

The move could give Democratic officials more flexibility to deal with the changing primary calendar. More than a dozen states have delayed their primaries, some of them pushing beyond the party's existing June 9 deadline to hold contests and the June 20 deadline to name convention delegates. Violating those deadlines can cost a state up to half its convention delegates. The party's rules and bylaws chairman, Jim Roosevelt, said Thursday that his full committee will consider waivers to the existing deadlines as they are submitted by state Democratic parties.

The move also allows Democrats to avoid another potential conflict: rescheduled NBA playoffs. It's not clear whether playoffs will occur, but existing convention plans had called for the party not to have access to prepare the arena until the Milwaukee Bucks had concluded their season. The NBA's original schedule posed no real threat. But rescheduled playoffs for July could have forced a renegotiation.

Milwaukee Mayor Tom Barrett said Thursday that he's “hopeful” about an overhauled convention, but he did not downplay the logistical challenges of putting on a convention. “I would love to say yes, and I hope it's yes and that we have tens of thousands of visitors, but we can see this is changing on an hourly basis,” he said, “and so I think there's a lot of twists and turns between now and obviously the end of this month, not to mention the three months we have following that.”

Republicans don’t face the same internal party uncertainty as Democrats, though they still must weigh the same public health scenarios.

Republican National Committee Chairwoman Ronna McDaniel said she thinks “we should be out of this” by the end of August. In an interview, she said Republicans already have raised the money necessary for the convention and have the staff hired and in place.

“We’re ready to go,” she said. “This isn’t something that’s going to stop us.”

Still, she added a caveat: “Obviously, science will dictate that.”

Catch up on the 2020 election campaign with AP experts on our weekly politics podcast, “Ground Game.”

This story has been corrected to show Biden spoke to NBC's Jimmy Fallon, not ABC's Jimmy Kimmel.