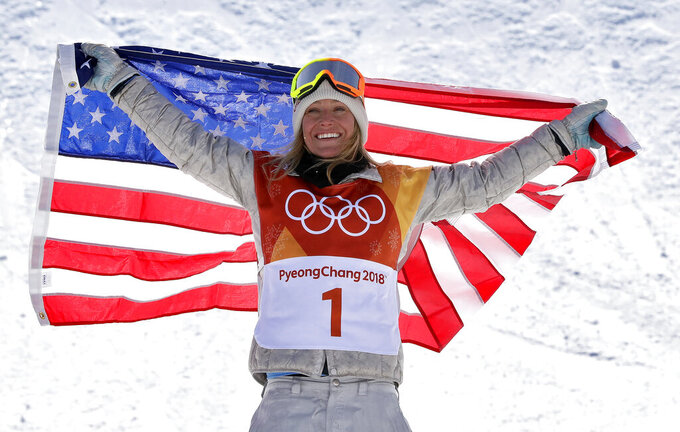 FILE - Jamie Anderson, of the United States, celebrates winning gold after the women's slopestyle final at Phoenix Snow Park at the 2018 Winter Olympics in Pyeongchang, South Korea, Monday, Feb. 12, 2018. Still bothering many of the riders was the way the slopestyle contests went down at the Pyeongchang Games four years ago. (AP Photo/Lee Jin-man, File)

ASPEN, Colo. (AP) — The wind-whipped ice pellets slammed against their faces and made their cheeks feel like frozen sandpaper. On another part of the mountain, the Alpine skiers had been sent back to their hotels, told the conditions were too dangerous for racing that day.

But for the snowboarders, the contest was on.

Four years later, that day at the Pyeongchang Olympics remains a source of bitter memories for the riders, including the gold medalist, Jamie Anderson.

It was, in their opinion, a loud and clear statement that, even 20 years after their sport was brought into the Olympics to give the Games a younger, more vibrant feel, they were still being treated like second-class citizens.

“Even if I was lucky to land a run, I think that was a really, really terrible call,” Anderson said in an Associated Press interview earlier this winter, reflecting on a winning trip down the course that included watered-down tricks that hadn't been part of winning slopestyle runs for a decade or more. “And they really didn’t give the riders any faith.”

That lack of faith was repeated in multiple interviews the AP conducted with riders and top industry executives in the lead-up to the Beijing Games, which start next week. They expressed similar feelings about the IOC, the Switzerland-based International Ski Federation (FIS) — which runs snowboarding at the Olympics — and the U.S. Ski and Snowboard Association, all of which have benefitted by bringing snowboarding into the mainstream.

“When you really think about it, we've always been oil and water with the Olympics,” said Donna Burton Carpenter, whose late husband, Jake, invented the modern-day snowboard and got it accepted at resorts across the globe.

It started at the sport's Olympic debut in Nagano in 1998, when the word “snowboarding” was misspelled on the scoreboard at the venue — “Snow-Bording.” The riders were placed on a rain-soaked halfpipe that made good performances almost impossible. The halfpipe contests were held in the wake of a positive marijuana test by giant slalom winner Ross Rebagliati that swamped the sport in controversy while reinforcing stereotypes that gave fuel to critics who felt snowboarding wasn't quite a “real” sport.

Shaun White emerged as the sport's true mainstream star after his gold medal in 2006, but in 2010 and 2014, subpar halfpipes hampered the quality of some contests, while others, including the 2010 parallel giant slalom races, were held in driving rainstorms that made umbrellas every bit as useful as snowsuits.

By 2018, snowboarders had earned a victory of sorts by altering an Olympic rule that had called for local companies to have a piece of the course-construction contracts at Olympic venues. It allowed for the industry's top course and halfpipe shapers to take part in the building, which most people agree led to better riding conditions.

Still, accommodations and scheduling changes that were made for skiers on the Alpine course because of bad weather were not made for the snowboarders. On the day four years ago that underscored all the problems — the day of the women's slopestyle contest — riders described communication as poor, and a general sense that if they didn't go on the day in question, they might lose their chance to compete for a gold medal.

What resulted was a contest in which 25 Olympians each got two runs. Of the 50 total runs, 41 ended with a rider on her backside, or in a face plant, or riding off the course, unable to navigate the blustery conditions.

“It was a bloodbath out there,” said Mark McMorris, the Canadian snowboard star who won a bronze medal in the men's slopestyle contest that also was held in windy, subpar conditions. "And to throw the women's slopestyle out there where wind plays a bigger factor. Those people are on the ground in Alpine skiing, not flying through the air on 80-foot jumps. I think snowboarding is sometimes overlooked in that sense.”

Dean Gosper, an Australian member of FIS who has a hand in trying to give action sports a better standing both at the Olympics and within the Euro-centric organization, said FIS has done a lot of reviewing and rehashing of the events of that day. Ultimately, the tight Olympic schedule and lack of “weather days” — backup days that have long been built into an Alpine schedule — led to the event going forward under bad conditions.

"One of the prices that freestyle snowboard and freeskiing had to pay to get into the (Olympic) mix is that there's a very tight schedule there for the execution” of their events, Gosper said.

As the riders head to Beijing for contests that begin Feb. 5, it feels strange to McMorris and many of his counterparts to be fighting essentially the same fights that their predecessors were waging in the '90s.

Back then, while snowboarding was mushrooming into the billion-dollar industry it is today, there already was a healthy competition side in a sport that also valued backcountry riding and freedom of expression that, some felt, should not be subjected to the whims of a judging panel.

That led to some riders, most notably Terje Haakonsen of Norway, who at the time was the best freestyle rider in the world, to say “no” to the Olympics. Always outspoken about his disdain for the IOC and the Olympics, Haakonsen was famously walking into Disneyland with his kids on Feb. 11, 2002, the day the American men swept the medals at the Salt Lake City Games, and a day often viewed as a turning point for the sport's mainstream popularity.

“I won more prize money in the ‘90s than people win in a FIS contest right now,” Haakonsen said in an AP interview last winter. “So, have the Olympics been good for the sport when the prize money is lower than what it was in the ’90s? I don't think so.”

Though there is no official database for prize money, Haakonsen won $100,000 at one halfpipe contest back in the day. These days, a good first prize is considered $45,000.

A core issue that has never been resolved was the IOC's decision to make FIS the governing body for snowboarding. At the start, there was no synergy between skiing and snowboarding, which spent its early years trying to nudge its way onto the mountains, where most skiers didn't want it.

“With skiers, I don’t know how much respect they have for snowboarders at the end of the day,” said Austrian snowboarder Anna Gasser, who won gold in big air a few days after finishing 15th in the 2018 slopestyle contest.

A generation later, many on the snowboarding side claim they haven't seen much change.

Kelly Clark, a three-time Olympic medalist and one of the icons of the sport, said she recently spoke to a panel of Alpine experts in her role on the U.S. Ski and Snowboard Association's fundraising arm. Part of her presentation was about the specifics needed to build a good halfpipe, the likes of which haven't been in play for at least half of the six Olympics at which snowboarding has been featured.

“A lot of people came up to me afterward and said they had no idea that conditions of the pipe mattered,” Clark said. “I was just amazed at the response."

Gosper, the FIS executive, said the organization needs to keep working to include snowboarding and action sports as full partners, not simply add-ons to Alpine.

“I think there's a long way to go,” he said. “And I think there's definitely been some discipline bias inside FIS. It's not through any malintent. It's just through traditional history.”

One clear sign of Alpine's dominance in Europe: Heading into the Olympics, the continent has 15 of the 60 top-ranked snowboarders on the world points lists for their respective disciplines; by comparison, Europeans take up 90 of the 100 top-10 spots across the five Alpine disciplines.

But in America, snowboarders account for a huge chunk of the USSA's success. With help from current headliners White and Chloe Kim, snowboarders have won 31 Olympic medals since the sport joined the Games. Alpine skiers, including Lindsey Vonn and Mikaela Shiffrin, have won a total of 21 over that period.

Given those numbers, Burton Carpenter said she was shocked to find that only about 5% of the 88 people on the USSA fundraising board, on which she has a seat, have a background in snowboarding — a figure confirmed by an AP review of the panel.

“We've produced more medals and that's, ultimately, how you measure success,” Burton Carpenter said. “So, giving us a fraction of the funding. It's (expletived) up.”

The funding formula is more complex than that. In general, it takes more money to turn an Alpine skier into an Olympic medal contender, from the training and coaching costs, to the increased travel costs to compete on circuits that are largely in Europe.

While USSA does not give a public breakdown of the money given to skiing vs. snowboarding, two people with knowledge of the data told the AP the split could be at least as much as 75-25 in favor of Alpine. The people did not want their names used because the data is not public.

The head of the USSA fundraising board, Trisha Worthington, did not respond to an email sent by the AP.

At the heart of the argument is that snowboarders have always felt almost a tribal loyalty to their own, and the mantra long heard in the community is that snowboarders, not skiers, should run snowboarding — not only at the grassroots, but at the highest levels, too.

Burton Carpenter said she's considering a push to extract snowboarding from the FIS domain, and potentially into a partnership with the international roller sports federation, which runs skateboarding and might have more in common with its winter cousins.

“Jake would say he never imagined where the sport was going to go, but it was the riders who did it, not FIS or the IOC,” Burton Carpenter said of her late husband. “I'm trying to find a way to have their voices heard. I don't know you can do that under skiing. They've proven they can't, and they don't listen to us.”