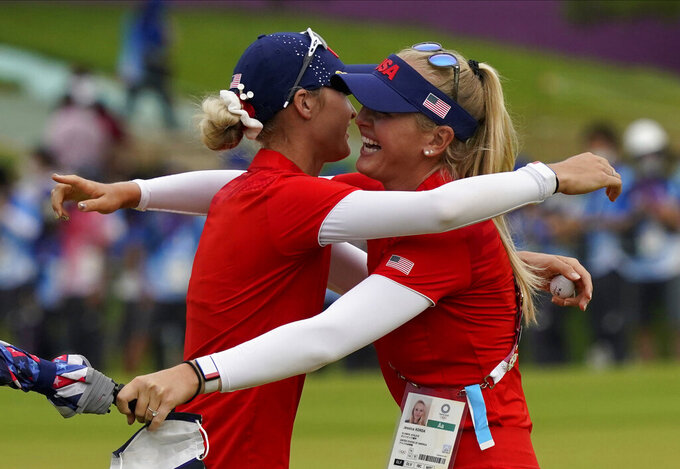 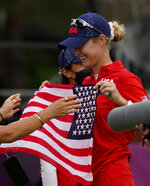 KAWAGOE, Japan (AP) — Her parents used to call her a lion when Nelly Korda was young because she was relentless in everything she played, from gymnastics to ice skating to golf.

“I've always been super determined and super focused on what I want,” Korda said.

Now she is more than she ever imagined: major champion, No. 1 in the world and Olympic gold medalist, all of this happening in the last two months.

Korda gave the Americans a sweep of gold medals in golf on Saturday, breaking away from the pack with three straight birdies around the turn and holding her nerve during a chaotic chase for medals and a one-hour storm delay at the end.

Korda tapped in for par and a 2-under 69 for a one-shot victory. Moments later, her 28-year-old sister, Jessica, joined her on the green for a hug and a shimmy. Jessica had finished earlier with a 64 to tie for 15th and looked forward to little sister's big moment.

“This is just kind of like almost legend status as a golfer, period, male or female,” Jessica said. “It’s tough to win out here and she makes it look easy, but those girls are good. So for her to be doing what she's doing, it’s insane to me. This is like total GOAT (Greatest Of All Time) status to me. To win three times in a season, be world No. 1, going for gold.

"You guys write for a living. This is exactly what you want to write about.”

Mone Inami of Japan delivered the golf-loving host nation a silver medal, and it was nearly better than that.

Inami, given the honor of the opening tee shot on Wednesday, ran off five birdies in a six-hole stretch toward the end, the last one from 8 feet on the 17th hole to tie for the lead.

She had gone over the 18th green in the third round and made bogey, and was tentative with her swing on Saturday. It came up short and plugged in the sand on the slope near the face. The best she could manage was to blast out to 30 feet. She made bogey for a 65.

“I regretted why I did not make a full swing,” she said.

Lydia Ko of New Zealand needed a 35-foot birdie putt to tie for the lead on the 18th. She left it 4 feet short and had to make that for a 65 to finish one behind.

In the playoff for the silver, Ko found a bunker off the tee on the 18th hole, had to lay up and missed a 10-foot par putt.

Ko had to settle for the bronze, after winning the silver in 2016 at Rio de Janeiro. She is the only golfer to win medals in both Olympics since the sport returned after a 112-year absence.

“It's not easy playing as the No. 1 in the Olympics. I did that in Rio,” Ko said. "And for her to fight through those kind of pressure and expectations and to end up winning the gold, I think it shows what kind of class player she is.

“I'm sure this is the start of many more majors and many more wins for Nelly.”

There was nothing easy about this final round for Korda, even starting with a three-shot lead. She fell into a tie for the lead, rebuilt it to three shots early on the back nine and then closed with six pars as three players made a bold run at her.

That list include Aditi Ashok of India, at an extreme disadvantage all week with her lack of distance off the tee, some of that brought on by a bout with COVID-19 this summer. With her magic touch on the greens — she one-putted the entire front nine — the 23-year-old with her mother as her caddie stayed in the mix all day.

Ashok's 12-foot birdie putt to keep pace with Ko burned the edge of the cup on the 17th hole, and she needed a 25-foot birdie putt on the 18th to stay in medal contention. That slid by the hole.

“I didn’t leave anything out there. I think I gave it my 100%," Ashok said. “But yeah, fourth in the Olympics where they give out three medals kind of sucks.”

Korda finished at 17-under 267 and made two double bogeys this week.

One came on the 18th hole of the second round when she needed a birdie for a 59. Korda and her caddie did not realize the tee box was 30 yards forward, leading to the wrong club and wrong line into the rough behind a tree.

The other was Saturday on the par-3 seventh when her tee shot went left into a collection area. It took Korda three chips to get onto the green, and the double bogey dropped her into a tie with Ko and Ashok.

All three birdied the par-5 eighth — Korda with a 25-foot putt that was as big as any — and Korda ran off birdies at the next two holes to restore her three-shot lead.

“I told myself there’s still a lot of golf to be left and I’m very proud of how I handled the next three holes, or even just the entire round after that,” Korda said.

Inami, Ko and Ashok all whittled away until they ran out of holes and Korda was left with a shiny gold medal and a future brighter than ever.