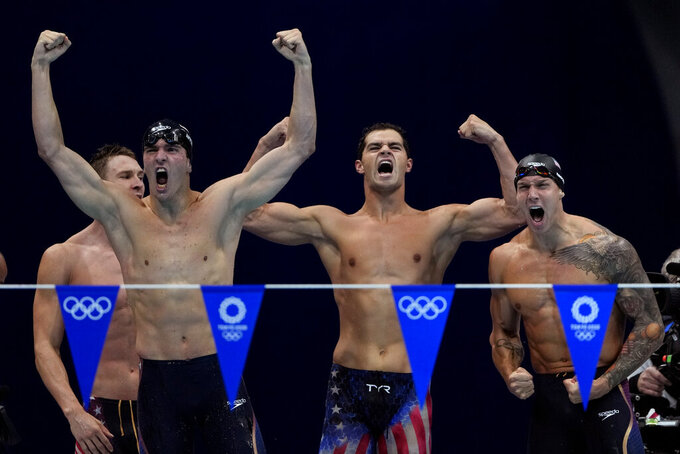 TOKYO (AP) — Caeleb Dressel finished off his gold rush at the Tokyo Olympics with two more dazzling swims. The guy who dreads all the attention won't be able to escape it now.

He's one of the greatest Olympians ever.

“I'm really glad to be done,” said the tattooed, 24-year-old Floridian, who captured his fourth and fifth gold medals of the Tokyo Games on Sunday.

Australia's Emma McKeon put her own remarkable stamp on the record book with a staggering haul of hardware.

McKeon won two more golds and became the first female swimmer — and second woman in any sport — to claim seven medals at one Olympics. Four of them were gold, the other three bronze.

“It’s going to take a little bit to sink in," said McKeon, a 27-year-old from Brisbane. "I’m very proud of myself.”

Dressel was perfect in the events he had a chance in, capping off his stunning week in the final race at the Tokyo Aquatics Centre by putting the Americans ahead to stay in the 4x100 medley relay on their way to a world record.

He doesn't plan to savor his triumph for long — which is right on par for a guy who said a day earlier “the sport was a lot more fun when no one knew my name."

They certainly know it now.

“I give myself a pat on the back and then I just want to go home, put it away and move forward,” Dressel said.

In his first race Sunday, he cruised to a relatively easy victory in the 50 freestyle. By the time Dressel was done, he had entered an elite club of swimmers who won at least five gold medals at one games.

Michael Phelps did it three times, of course, highlighted by his record eight golds at the 2008 Beijing Games.

Make room for Dressel, who made it look so easy.

“It’s not the most enjoyable process, but it is worth it,” he said. “I’m pretty over swimming at the moment.”

Many of the retired swimming greats come up again to provide some perspective on McKeon's performance in Tokyo.

Phelps, Spitz and Biondi are the only male swimmers to capture seven medals overall at an Olympics.

The only other woman to win seven — in any sport — was Soviet gymnast Maria Gorokhovskaya, who claimed two golds and five silvers at the 1952 Helsinki Games.

The only event Dressel failed to win all week was the new 4x100 mixed medley relay, though that was no fault on his own.

In a race featuring two men and two women, the Americans tried a different lineup than everyone else, which left Dressel more than 8 seconds behind when he took over on the anchor leg.

Not even Dressel could make up such a daunting deficit.

Otherwise, his time in Tokyo was perfect.

The last morning at the pool started with another romp in the 50 free — Dressel's third individual title of the games.

After diving in, he used his dolphin-like underwater technique to pop out of the water with the clear lead, just as he always does. In a race usually decided by a few hundredths of a second, he touched a half-body length ahead of the field in an Olympic record of 21.07 seconds.

When he saw his time and, more important, the “1” beside his name, he splashed the water and flexed his bulging arms.

France's Florent Manaudou repeated as the Olympic silver medalist in 21.55, followed by Brazil's Bruno Fratus in 21.57.

At the age of 32, Fratus felt like a winner. He missed out on a medal at the 2012 London Olympics by just two-hundredths of a second, and came up short again five years ago in his home country.

“I got myself an Olympic medal,” Fratus said. “Nine years late, in my opinion, but I got it. I can have some peace of mind.”

In the men's medley — a race the Americans have never lost at the Olympics —the U.S. was trailing two other teams when Dressel dived in for the butterfly.

Just like that, he blew by Britain and Italy with a blistering leg of 49.03, more than a second faster that anyone else.

Zach Apple made the lead stand up on the freestyle to give the Americans a world record of 3 minutes, 26.78 seconds -- eclipsing the mark of 3:27.28 they set at the 2009 Rome world championships in rubberized suits.

McKeon completed her own sweep of the freestyle sprints, touching in an Olympic-record 23.81 to add the 50 title to her victory in the 100.

Sweden's Sarah Sjöström took the silver in 24.07, while 2016 gold medalist Pernille Blume of Denmark settled for bronze this time at 24.21.

In the medley relay, McKeon entered truly rarified territory. She took the butterfly leg before Cate Campbell rallied the Aussies to a victory over the two-time defending champion Americans.

“I don’t know how she does it. I’m exhausted,” said Kyle Chalmers, one of McKeon’s teammates. “To win one gold medal or an Olympic medal, it’s very, very special. We’re lucky to have her on the team.”

In keeping with the theme of the day, Bobby Finke pulled off his own sweep in the two longest freestyle races.

With another strong finishing kick, Finke became the first American man in 37 years to win the 1,500 freestyle. He added to his victory in the 800 free, a new men’s event at these games.

Relatively unknown before the U.S. Olympic trials, Finke made startling improvement in recent months. He benefitted as much as anyone from the games being pushed back a year by the pandemic.

No one was better at the end. After lingering close to the lead throughout, Finke blew away the field on the last of 30 laps, leaving Ukraine's Mykhailo Romanchuk (14:40.66) and Germany's Florian Wellbrock (14:40.91) in his wake.

“I came in not really expecting to get a medal or anything,” Finke said, “and I come out of it with two golds.”

Of course, big things were expected of Dressel.

He was one of the most-hyped stars coming into the games, billed as the successor to Phelps as the world's most dominant male swimmer.

When it was over, virtually every goal was realized.

“I’m proud of myself,” Dressel said. “I feel like I reached what my potential was here at these games.”