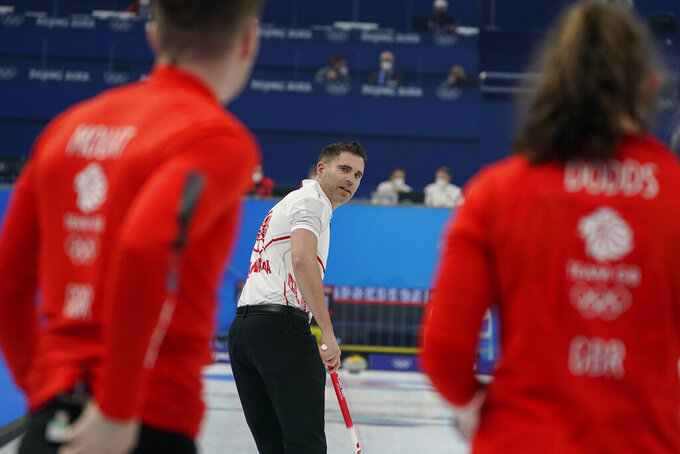 John Morris, of Canada, center, looks towards the players of Britain during the mixed doubles curling match at the Beijing Winter Olympics Thursday, Feb. 3, 2022, in Beijing. (AP Photo/Brynn Anderson)

BEIJING (AP) — Somewhere under the four sheets of curling ice being used for the Beijing Olympics is the swimming pool where Michael Phelps splashed his way to history in the 2008 Summer Games.

At first glance, the few spectators allowed into the National Aquatics Center might think the pool is gone forever, filled in to allow the curlers to slide their heavy granite stones down long, narrow sheets of ice to try to knock out their opponent’s rocks, accompanied by shouting and furious sweeping.

Not so. In a cool bit of engineering and technology, the Water Cube has turned into the Ice Cube.

The boxy building looks pretty much the same as it did 14 years ago, including its stunning blue exterior of translucent panels that resemble soap bubbles and light up at night in colorful displays. It’s just that for the time being, it’s a curling rink.

Here's more on what took place and how it's being received.

After the 2008 Games, the Water Cube was converted to a public water park that included water slides, although the main pool and training pools were kept in place. The diving platforms from 2008 are still there, too, but are blocked from view during the curling competition by a large backdrop and a video board.

After Beijing was awarded these Winter Games, officials began planning a convertible support structure and a removable ice-making system to allow the building to be used for curling without losing the swimming pool. After the pool is drained, a structure of more than 2,500 steel beams and more than 1,500 lightweight prefabricated concrete panels is assembled to support the curling surface.

Water Cube/Ice Cube is perfect for curling because the ice sheets are just shorter than the 164-foot Olympic pool. It can be converted back to a pool in about 20 days.

Curling stands on its own as a popular sport at the Winter Olympics, but the athletes say it is pretty neat competing in a venue made famous by Phelps’ epic performances in 2008, when he won a record eight gold medals to eclipse Mark Spitz's haul of seven golds in 1972.

Canadian John Morris is the defending gold medalist in mixed doubles and would love to add to his collection at the Ice Cube. He also won a gold in the team competition in 2010.

“I didn’t really understand it too well until I walked in here and I saw that Beijing 2008 sign on the diving board. I was like, ‘Oh, that’s pretty cool. I remember watching that on TV,’“ says Morris, who is competing with new partner Rachel Homan. “It’s a wonderful complex, the Ice Cube here, and hopefully they can fill it with as many fans as they’re allowed in here because that obviously adds to the vibe and environment."

Morris noticed that the hot tub near the diving platform is up and running. During the Summer Olympics, it helped divers keep their muscles loose. At the Winter Games, it adds to the effects of humidifiers lined up along the sides of the playing surface. “I was hoping we could actually use the hot tub after the game," Morris says, “but we’ll see.”

Morris says he’s impressed with the job the Chinese did in both reusing a venue and laying down top-notch ice sheets.

“It would have been cool if they just froze the swimming pool water. That would have been real legit,” he jokes. “But a lot more went into it and I know the Chinese pretty much didn’t cut any corners in trying to make this as great an experience as they could for us curlers and people watching. I think that’s cool how they can do that.

“And you know what? I have to say I think the future of the Olympics is these types of games that are held in previous cities that are more sustainable,” Morris said. “They’re not going to cost tons of money and get torn down after the games."

American mixed doubles curlers Chris Plys and Vicky Persinger say they were awestruck when they walked into the Ice Cube for the first time. Two-time Olympian Plys, who has an autographed photo of Phelps over his desk at home, says being in the Ice Cube made him think back to watching Phelps’ races on TV in 2008.

“He’s my favorite Olympian of all time, so to be in the same arena as him and all those races that happened is honestly just the coolest thing I could ever imagine,” Plys says. “It would be like a hockey player getting to play in old Maple Leaf Gardens or something like that.”

Olympic rookie Persinger says she noticed a floor drain and tiles that suggested there is indeed a swimming pool in the building and that there’s still a big mosaic of koi fish in the dressing room. “I don’t want to jinx myself here but I think it’s one of the coolest venues I will ever play my entire life,” Persinger says.

“Going to the Olympics may be once in a lifetime for a lot of people, and being able to play in this type of event is definitely once in a lifetime," Persinger says, “because, I mean, just to be on top of American Olympic history like this is really special.”

In this case, it really is on top of history.