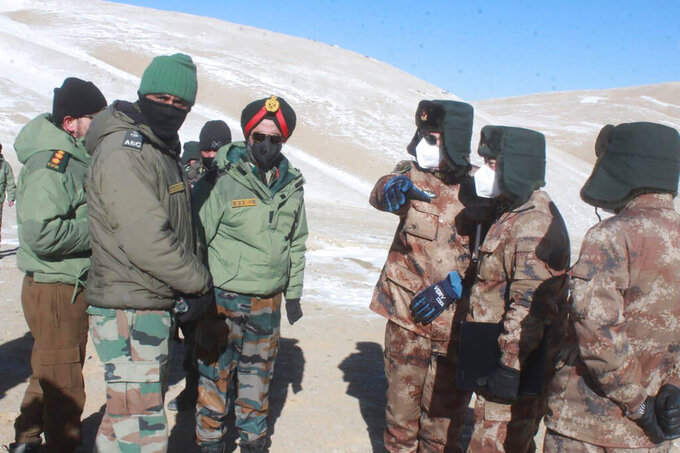 FILE-In this photograph provided by the Indian Army, army officers of India and China hold a meeting at Pangong lake region in Ladakh on the India-China border on Wednesday, Feb. 10, 2021. India will not attend Friday's opening ceremony of the Beijing Winter Olympics, after one of the torchbearers reportedly chosen by Chinese authorities riled up New Delhi's anger. India's foreign affairs spokesman Arindam Bagchi on Thursday said it was "regrettable that the Chinese side has chosen to politicize an event like the Olympics." (Indian Army via AP, File) 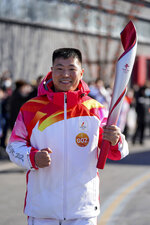 NEW DELHI (AP) — India won’t be sending its top diplomat in Beijing to the Winter Olympics after the honor of carrying the Olympic torch went to a Chinese soldier wounded in a deadly border clash between the countries two years ago.

What is this border dispute, and why has it riled up the Indian government?

Until this week, India was considering having its top diplomat at its embassy in Beijing attend the games even as several countries like the U.S., Australia, Britain and Canada will engage in a diplomatic boycott, citing China’s human rights violations, while allowing their athletes to compete.

In fact, in November, India had joined Russia in expressing support for the Beijing Games during the BRICS summit — a meeting of large emerging economies.

The decision to field Qi as a torchbearer was swiftly denounced by the Indian government, which accused Beijing of politicizing the games.

India’s foreign ministry said it was “regrettable that the Chinese side has chosen to politicize an event like the Olympics,” adding that the Indian Embassy in Beijing would not send its representative to the opening and closing ceremonies.

Beijing did not immediately respond to India’s announcement.

India’s anger and the diplomatic boycott of the games stem from a border clash nearly two years ago.

China and India share a disputed border, called the Line of Actual Control, that separates Chinese- and Indian-held territories from the high cold-desert region of Ladakh to India’s eastern state of Arunachal Pradesh. In 1962, this dispute resulted in an armed conflict that ended with a fragile truce. Since then, troops from opposing sides have guarded the undefined mountain border area but agreed not to attack each other with firearms.

A confrontation in June 2020 — their deadliest in decades — sharply changed relations. The rival troops fought with rocks, clubs and their fists in hand-to-hand combat in Galwan Valley along the undemarcated border in Ladakh. At least 20 Indian troops and four Chinese soldiers were killed.

The high-altitude standoff dramatically altered the already fraught relationship between the nuclear-armed neighbors. Tensions have since persisted despite talks at military, diplomatic and political levels.

The rivals have stationed tens of thousands of soldiers backed by artillery, tanks and fighter jets along their fiercely contested de facto border and upgraded several strategic roads and bridges. Their militaries have also publicized large combat-readiness drills.

Politically, the tensions have been equally simmering, and top diplomats from both countries have often traded barbs.

India will, however, participate in the games. Its sole sportsperson at the Winter Olympics, Arif Khan, is a skier from Indian-controlled Kashmir, and he is reportedly taking part in the opening ceremony.

“It’s a diplomatic boycott, and not an athlete boycott,” he was quoted as saying by the Indian magazine Outlook on Friday.

But New Delhi's diplomatic boycott and Beijing's decision to spotlight military commander Qi — he received the title of “hero regiment commander for defending the border” last year — is expected to raise more tensions.

And it appears New Delhi has already sent another message: India’s public broadcaster, Doordarshan, announced late Thursday evening that it would not broadcast the opening or closing ceremonies.