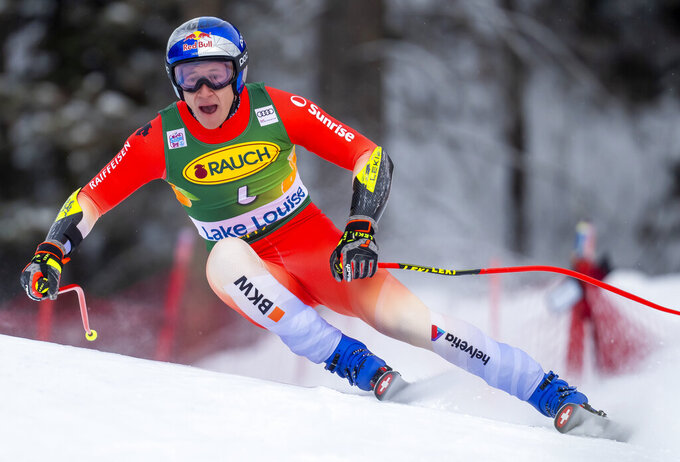 BEAVER CREEK, Colo. (AP) — They glowingly chatter about the ski racer from Switzerland whose turns are so sharp and speed almost unmatched these days.

They study video of Marco Odermatt's races and training runs to search for clues to how he's always so smooth. That combination of speed and smoothness led him to a giant slalom gold medal at the Beijing Olympics and the overall World Cup title last season. It's also allowed him to start strong this season, going 3-for-3 in World Cup podium finishes, including two wins.

“I like to have a good time,” said Odermatt, who will be among the favorites in all three speed events at the World Cup stop in Beaver Creek this weekend, starting Friday with a downhill. “This is the way it works for me. I prefer to have a good time.”

Obviously, it's not all that simple. But he makes it appear that way.

“The possibility is there that he can be the next Hirscher,” International Ski Federation men's race director Markus Waldner said.

That's high praise and a reference to Austrian standout Marcel Hirscher, who retired at the summit of the sport after winning his eighth straight overall World Cup title. Since Hirscher's departure, the competition has been wide open, with Norway’s Aleksander Aamodt Kilde winning in 2019-20, France’s Alexis Pinturault in 2020-21 and Odermatt last season.

“It’s probably more interesting for the fans, for the whole tour (to have more winners)," Odermatt said of the overall race. “But I mean, I wouldn’t care if it it stayed the same for the next three, four or five years with me. I would be fine with that.”

The 25-year-old Odermatt has steadily been building toward this run of excellence. He was winning as a kid (he got to spend the day skiing with his idol, Swiss downhill great Didier Cuche, as part of the prize). He was winning as a youth (four individual gold medals at the 2018 junior world championships in Switzerland).

“He’s just showing that he’s at the top of the world, in terms of his dominance, and his level of skiing,” said Ryan Cochran-Siegle, the racer from Vermont who captured silver in the super-G at the Beijing Games. “The tides are shifting into his time right now.”

Odermatt's fellow racers study his technique, to see what he's doing so well.

“He just gets to the top of the turn before everyone and makes more power. And he's in control doing that," U.S. ski racer Bryce Bennett explained. “That kid’s amazing.”

Now, he gets to find out if it's more difficult to win his first overall crown or to repeat. Odermatt has a feeling he already knows.

“I think it’s harder to win it (the first time),” said Odermatt, who counts playing cards with teammates among his ways of unwinding and having a good time. “Because now I know that I have everything to win it. You have even more confidence about this. If it’s the first time, you just don’t know if you are able to do it.”

He's already on the right track. He won the giant slalom in Soelden, Austria, in October, then followed that up by taking third in a downhill and winning a super-G last weekend at Lake Louise, Alberta.

There are three scheduled races this weekend on a challenging Birds of Prey course he thoroughly enjoys. With good reason, too, considering his first-ever World Cup win was in Beaver Creek during a 2019 super-G race. Odermatt also won another super-G event on the course in 2021.

“Odermatt is the favorite,” said Austria’s Matthias Mayer, who turned in the top time Thursday on the second day of downhill training, 0.11 seconds ahead of teammate Vincent Kriechmayr. “At this time, he is in very good shape. He showed us this last year, and he's showing it this year again. He’s amazing.”

“Marco’s the next generation," the 31-year-old Pinturault said. "He looks pretty strong.”

And looking for ways to get even stronger.

“There are always things to improve. There are so many different puzzles that have to fit together,” Odermatt said. “I’m still young. I had one, two, very good seasons, but not so many. So there are still many goals to come, many cool races where I haven’t won. And even if you already have won once, you want to win again.”