Final major of year at British Open with plenty of fans, WDs 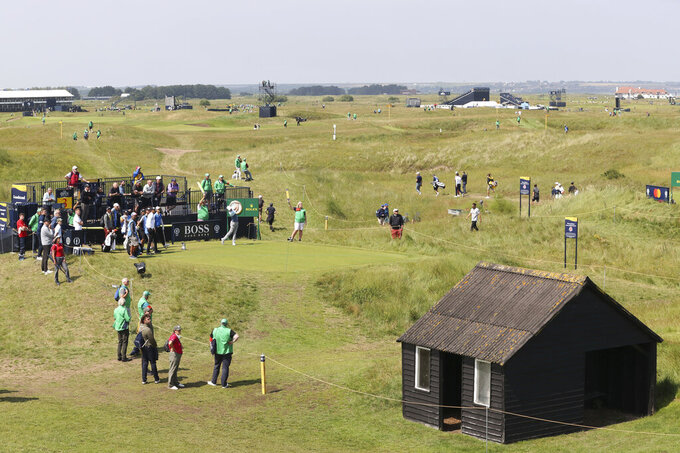 Last year: Lowry won by six shots over Tommy Fleetwood at Royal Portrush in the first British Open held in Northern Ireland since 1951.

Notes: The final major of the year was the only one canceled last year due to the COVID-19 pandemic. It stayed at Royal St. George's so the 150th Open could be at St. Andrews. ... The R&A is allowing 32,000 fans a day during competition, by the far the largest of any major since before the pandemic. ... Sixteen players have withdrawn over the last three weeks, including Zach Johnson because of a positive COVID-19 test and Masters champion Hideki Matsuyama because of positive test results even after his asymptomatic isolation was over. ... Royal St. George's was the first links in England where the British Open was played. This is the 15th time it has held the Open. ... Players from Asia (Matsuyama), North America (Phil Mickelson) and Europe (Jon Rahm) have won major this year. The four major champions have never come from four continents since the Masters began in 1934. ... Royal St. George's holds two distinctions in Open history: the first champion who failed to break 80 in any of the four rounds (J.H. Taylor in 1894) and the first champion to shoot in the 60s all four rounds (Greg Norman in 1993).

Notes: The tournament, held the same week as the British Open, was canceled last year because of a rearranged schedule from the COVID-19 pandemic. ... The winner does not receive an invitation to the Masters. ... Former British Open champion John Daly is in the field. This will be his third PGA Tour-sanctioned event of the year after the AT&T Pebble Beach Pro-Am and the PGA Championship. ... Other former major champions in the field are Jason Dufner and Charl Schwartzel. ... Three players who will be in Japan for the Olympics are playing — Anirban Lahiri of India, Rafael Campos of Puerto Rico and Henrik Norlander of Sweden. ... Scott Piercy in 2015 is the highest-ranked player to win the Barbasol Championship (No. 112). Jim Herman is the lowest-ranked player (No. 1,269). ... Wilco Nienaber, the big-hitting South African, received a foreign exemption to play.

Notes: The tournament is the only team event on the LPGA Tour. It made its debut in 2019 and then was canceled last year due to the COVID-19 pandemic. ... Suwannapura and Clanton won the inaugural event by six shots. ... Sisters Jessica and Nelly Korda are playing together, referring to themselves as “Team Jelly." They all will be playing in the Olympics. ... The tournament comes a week before the fourth LPGA major of the year at the Evian Championship in France. ... Lexi Thompson and Danielle Kang are playing, meaning all four American women in the Olympics are playing this week ... Two of the four South Koreans in the Olympics, Inbee Park and Hyo Joo Kim, are playing.